Astrology Charts - Tarot Course Table of Contents. Tarot-Lovers.com: the complete guide to Tarot Cards, their Meanings, Spreads and Illustrations. Tarot. William Blake Tarot. The William Blake tarot was designed by Ed Buryn (with the help of Mary Greer) based on some images of Blake’s works that strongly resembled the Major Arcana. 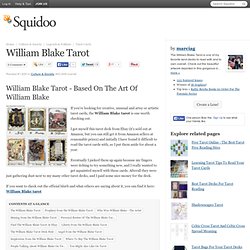 When I finally sat down with the cards, I didn’t start reading with them right away. I first wanted and had to get to know them. I wanted to make friends with them and lure out their secrets and mysteries. As usual I shuffled well the cards since they were new, and then started randomly taking out cards, regardless of whether they were Major Arcana or Minor Arcana. The truth is that I was so blown away by the beauty of William Blake’s work, that I eventually ended buying his Complete Illuminated Books at Amazon because the art is simply too beautiful to brush aside.

At some point though I got over my “open jaw” syndrome and I seriously started to study the cards. Template:Tarot Cards. Celtic Cross Spread. This is an old post, I believe from Solandia if memory serves me correctly. 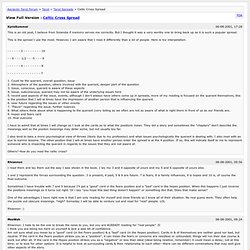 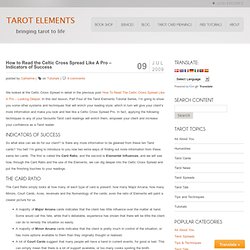 In this last lesson, Part Four of the Tarot Elements Tutorial Series, I’m going to show you some other systems and techniques that will enrich your reading style; which in turn will give your client’s more information and make you look and feel like a Celtic Cross Spread Pro. In fact, applying the following techniques to any of your favourite Tarot card readings will enrich them, empower your client and increase your confidence as a Tarot reader.

So what else can we do for our client? Is there any more information to be gleaned from these ten Tarot cards? You bet! Tarot Spreads [Text Only] Linda Goodman's Love Signs: A New Approach to the Human Heart: Linda Goodman: Books. The Fairy Tale Tarot by Lisa Hunt. Introduction to Tarot Reversals. Part I Let me start with this introduction, which is all my humble opinion. 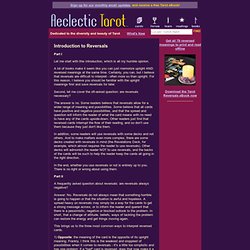 A lot of books make it seem like you can just memorize upright AND reversed meanings at the same time. Certainly, you can, but I believe that reversals are difficult to interpret - often more so than upright. For this reason, I believe you should be familiar with the upright meanings first and save reversals for later. Second, let me cover the oft-asked question: are reversals necessary? The answer is no. In addition, some readers will use reversals with some decks and not others. In the end, whether you use reversals or not is entirely up to you. Part II A frequently asked question about reversals: are reversals always negative? Answer: No. Mary K. Greer's Tarot Blog. I am delighted to provide this previously unpublished text, which is from a hand-copied manuscript of Sub Spe [John Brodie Innes] I apologize to those who will find many of the references difficult, but the information can help greatly in understanding the Golden Dawn approach to the Minor Arcana and also the Rider-Waite-Smith and Crowley’s Thoth decks. 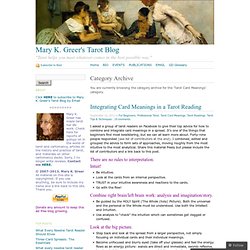 A glossary of Golden Dawn terms is available at The Hermetic Order of the Golden Dawn website (click on H.O.G.D. Dictionary in the directory). General Scheme: Key to Evocation: Zodiacal Decans. I have previously published this article on the e-zine, Rending the Veil, and I thought that it would be useful to post it here for my readers to examine, just in case they didn’t catch it. 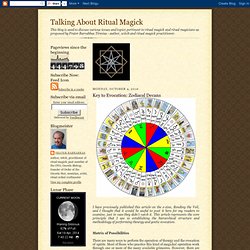 This article represents the core principle that I use in establishing the hierarchical structure and methodology of performing theurgy and goetic evocation. Matrix of Possibilities There are many ways to perform the operation of theurgy and the evocation of spirits. Most of those who practice this kind of magickal operation work through one or more of the many available grimoires. However, there are other ways to perform this operation that have little to do with the old grimoires; yet these other methods require the invention of a completely alternative magickal technology to make use of them. Tarot. The Tarotize UK aStore - The Secret Language of Birds Tarot. Product Description Birds were once considered to be messengers from the Gods to humankind, and the Tarot was once called .. 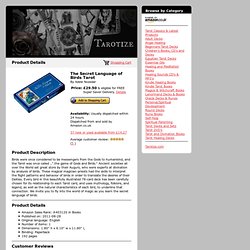 ".the game of Gods and Birds. " Ancient societies all over the World set great store by their Augurs, who were experts at divination by analysis of birds. Annikin Divination Systems free Tarot, Rune and Cartomancy readings - www.myDivination.com. Tarot of the Mastersby James Ricklef The cards in the Tarot of the Masters deck were inspired by classic paintings by old masters, such as Toulouse-Lautrec, El Greco, and Rubens. 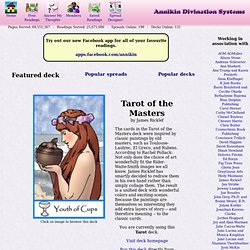 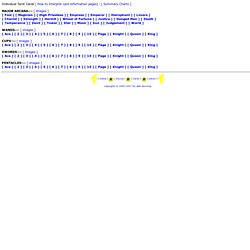 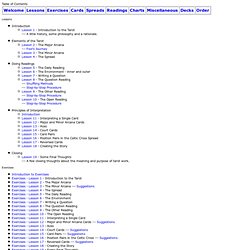 Elements of the Tarot Lesson 2 - The Major Arcana --- Fool's JourneyLesson 3 - The Minor Arcana Lesson 4 - The Spread Doing Readings Principles of Interpretation IntroductionLesson 11 - Interpreting a Single CardLesson 12 - Major and Minor Arcana Cards Lesson 13 - Aces Lesson 14 - Court Cards Lesson 15 - Card Pairs Lesson 16 - Position Pairs in the Celtic Cross Spread Lesson 17 - Reversed Cards Lesson 18 - Creating the Story Closing Lesson 19 - Some Final Thoughts --- A few closing thoughts about the meaning and purpose of tarot work. Exercises Card Information Pages Spread Information Pages Sample Readings Charts Miscellaneous [ Home ] [ Course ] Poll: Would you ever tell someone that the Death card predicts a literal death? « James Ricklef's Tarot Blog. While re-editing my book, Tarot Tells the Tale, which I plan to reissue soon (see my recent article on this topic), I got to a section where I talk about the Death card.

I mention there the fact that although I have, on rare occasion, seen the Death card signify a physical death, in my readings it has always indicated either a death that has already transpired (for example, in a reading for a recent widow) or one that is expected, such as for a querent with a terminally ill loved one. In such cases, it addresses questions about how this person is dealing with death, or perhaps about what he or she believes about the afterlife. So … does the Death card ever indicate an actual, physical death? Is it ethical to predict physical death in a Tarot reading?

Or is it ethical to avoid making such a prediction? 2010-06-11 Angelic Correspondences: Numerology & Major Arcana by Cheryl Lynne Bradley (c) "The name Angel refers to their office, not their nature. You ask the name of this nature, it is spirit; you ask its office, it is that of an Angel, which is a messenger. " St. The Kingdom Within Tarot. Symbol Meanings of the Tarot (D - K) 78 Tarot Blogs and Websites Worth Checking Out. My tarot students often ask me where they can get good, solid tarot information on the internet. There’s a lot out there and sometimes it can be overwhelming to pick through the good from the bad.

So I thought I would compile a list of some of the best and brightest tarot writing and information that the world wide web has to offer. Tarot Eon ( ) My favorite tarot website, hands down.