Nadhim Zahawi launches bid to get universities to take in more white working-class boys  Just a handful of institutions set goals for number of white working-class males Research shows 12.6 per cent of them go on to higher education by the age of 19 And support for the group with bursaries and scholarships is non-existent By Julie Henry For The Mail On Sunday Published: 19:42 EST, 27 November 2021 | Updated: 19:43 EST, 27 November 2021 A new national target is to be introduced in a bid to increase the number of white working-class males studying at university, The Mail on Sunday can reveal. 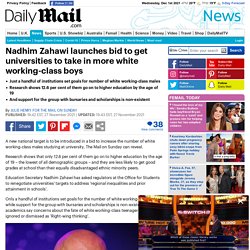 Research shows that only 12.6 per cent of them go on to higher education by the age of 19 – the lowest of all demographic groups – and they are less likely to get good grades at school than their equally disadvantaged ethnic minority peers. Boys Have Eating Disorders, Too. Doctors Think Social Media Is Making It Worse. - The Wall Street Journal. Eating disorders are on the rise among boys, say doctors, who think images and videos on social media are a factor. 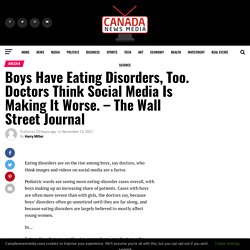 Pediatric wards are seeing more eating-disorder cases overall, with boys making up an increasing share of patients. Cases with boys are often more severe than with girls, the doctors say, because boys’ disorders often go unnoticed until they are far along, and because eating disorders are largely believed to mostly affect young women. Boys are falling behind: How schools must change to help young males. Imagine being bombarded with a chorus of, “Pay attention. 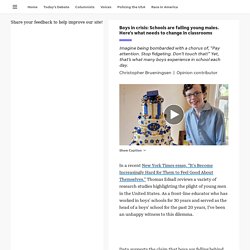 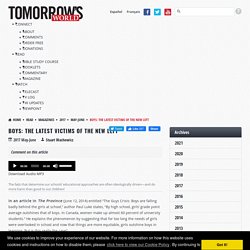 In Canada, women make up almost 60 percent of university students.” He explains the phenomenon by suggesting that for too long the needs of girls were overlooked in school and now that things are more equitable, girls outshine boys in learning. But is this really the case? Recently Dr. Jim Dueck, author and former Assistant Deputy Minister of Education for the province of Alberta, and former head of Accountability and Student Assessment, performed a revealing analysis on current practices in student assessment. Dr. Given the examinations are carefully designed to measure the students’ understanding of the curriculum, there should be relatively little variation between the teacher-assigned mark and the mark received on the provincial examination. Dr. Males, The Hidden Underclass - Parents for Choice in Education.

How Grade Inflation Disproportionately Impacts Male StudentsJim Dueck Ed DLow standards, measured by monitoring grade inflation, in classrooms is a horrific, longstanding problem across North America, but was relatively minor in Alberta. While this insidious educational problem was evident in Alberta, researchers credit provincial testing for keeping it in check.

For example, averaged upper stream courses between 2011 and 2015 for the Standard of Excellence demonstrated that class marks from teachers were considerably above diploma examination marks. In Language Arts 30-1, 181% more students received Excellence from their classroom teacher than on the exam: Math 30-1 was 48% more; Social Studies 30-1 was 141% more; Biology 39% more; Chemistry 40% more; and Physics 50% more. Males The Hidden Underclass How grade inflation hurts male students most. Memo to the World Economic Forum: It’s the Biology, Stupid – The Word of Damocles. This continues my last piece on the “Global Gender Gap Report.” 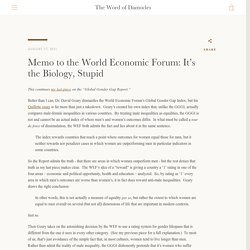 Better than I can, Dr. David Geary dismantles the World Economic Forum’s Global Gender Gap Index, but his Quillette essay is far more than just a takedown. Geary’s created his own index that, unlike the GGGI, actually compares male-female inequalities in various countries. By treating male inequalities as equalities, the GGGI is not and cannot be an actual index of where men’s and women’s outcomes differ. A new study from MIT shows that teacher bias against boys is a major cause for the education gap. – An MRA in Hollywood. As an earlier post discussed, a major MRA issue is the “Education gap”, which is the chronic and systemic underachievement boys experience in the education system. 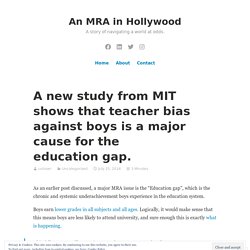 Boys earn lower grades in all subjects and all ages. Logically, it would make sense that this means boys are less likely to attend university, and sure enough this is exactly what is happening. This fall, women will comprise more than 56 percent of students on campuses nationwide, according to the U.S. Department of Education. What We Are Not Teaching Boys About Being Human. We have barely even registered this lack of an emotional and relational education as a worrying loss for boys. 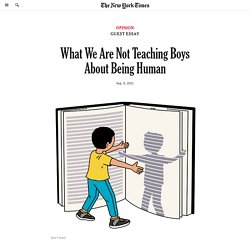 We tend to dismiss and trivialize teenage girls’ preoccupation with the intricacies of relationships as “girl-drama.” Boys: The Latest Victims of the New Left. Suicide Deaths and Education Reveal Growing Need for Male Gender Council. Recent Attention on Male Suicides and School Lockdowns When Brad Hunstable posted a video about the loss of his 12-year-old boy, Hayden, it brought the social isolation and suicide deaths associated with COVID to the forefront. 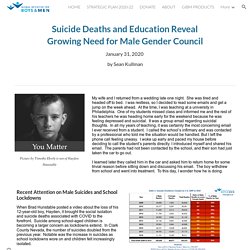 Suicide among school-aged children is becoming a larger concern as lockdowns extend. Vitamin D the Clue to More Autism Spectrum Disorder in Boys. Summary: Vitamin D deficiency during pregnancy may explain why males are three times more likely to be diagnosed with ASD than girls. 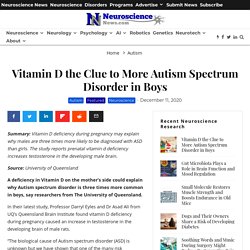 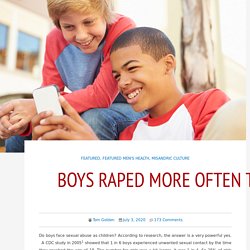 According to research, the answer is a very powerful yes. MP Accused of 'Racism' over Inquiry Into White Boys Falling Behind. Robert Halfon MP says he has been accused of “racism” after announcing a parliamentary inquiry into white working-class pupils, especially boys, falling behind in schools. “The whole premise of the committee is to look at left behind cohorts, those who are falling way behind,” said Halfon, who chairs the influential Commons Select Committee for Education. “One of those groups sadly is white working-class pupils from poor background, and within that group, boys do worse than girls,” he explained in comments to The Telegraph.

“I have been accused of racism, which I find really hard to fathom. Kids Starting School Early Diagnosed with ADHD. New research suggests parents of children with late summer birthdays may want to consider holding their kids back one more year before starting school. Share on Pinterest The start of kindergarten is a big deal for a lot of families. Millions of boys are deprived of their freedom – Human Rights And Wrongs. Reading Time: 38 minutes Seven million boys are deprived of their freedom worldwide according to a United Nations report.Boys are also disadvantaged in areas of armed conflict.United Nations Secretary-General (the top boss) calls upon all nations to address the root causes of deprivation of liberty of children, reduce inequalities and support families to empower them for good child-rearing.Article 12 of the Convention on the Rights of the Child is commended to nations, to empower children to actively participate in all matters directly affecting their lives, and to influence decisions relating to their treatment.Family is identified as a key necessity for the well-being of children.

'Boys Get Sad Too' founder on his struggle with depression: 'I want to be the person that I needed in that situation' - MyLondon. 84 men in the UK take their own lives every week. Mental health awareness is on the up, but it's not happening quickly enough - and it's costing young men the most. One of the key issues for men experiencing depression and anxiety is that they don't feel they can open up about it, worrying that it makes them less of a man. Kyle Stanger is trying to challenge this through his fashion brand Boys Get Sad Too , which he hopes will raise awareness and start conversations about male mental health.

Males at risk: 'Boy crisis' of identity jeopardizes America's future. When it comes to solving what he calls the "boy crisis," author Dr. Warren Farrell says family, schools and policymakers must play a role. The Other Gender Gap. Focus on traumatized boys critical to gender equality, new research shows. TORONTO -- Boys in poor urban areas around the world are suffering even more than girls from violence, abuse and neglect, groundbreaking international research published on Monday suggests.

"This is the first global study to investigate how a cluster of traumatic childhood experiences known as ACEs, or adverse childhood experiences, work together to cause specific health issues in early adolescence, with terrible life-long consequences," Dr. Robert Blum, the lead researcher for the global early adolescent study, said in a statement. "While we found young girls often suffer significantly, contrary to common belief, boys reported even greater exposure to violence and neglect, which makes them more likely to be violent in return.

" The study from Johns Hopkins Bloomberg School of Public Health looked at childhood traumas suffered by 1,284 adolescents aged 10 to 14 in more than a dozen low-income urban settings around the world such as the United States, China, the U.K., Egypt and Bolivia. Men's Rights News & Info. Barbara Kay: The male crisis that’s ruining our boys and no one cares about.

Father’s Day approaches and with it the opportunity to consider the importance of fathers to their children. It is difficult to overstate both the positive effects of growing up with a father and the negative effects of father absence, especially for boys. These myriad benefits and perils are on record, undisputed and easily accessible. A Doll to Improve Boys’ Empathy? Leonard Sax and I Think Not. Deadbeat son is a sign of America’s failure to raise boys. The Drugging of the American Boy. Dailywire. Black boys are the least likely of any group to escape poverty - A broken ladder. Lads Need Dads: one mum's mission to save British masculinity. Men's E-News - The Boy Crisis: Why Our Boys Are Struggling and What We Can Do About It. What is the boy crisis? It’s a crisis of education. Worldwide, boys are 50 percent less likely than girls to meet basic proficiency in reading, math, and science. Women have found their voices. Now it may be America’s boys who need our attention.

After the holidays, I was catching up on some reading when I came across a community newsletter announcing the “Women’s March on Olympia” scheduled for kickoff at the State Capitol. This topic brought to mind the suffragists of the early 19th century. Now it’s the principal’s wife having sex. A former social-studies teacher at a Colorado high school, who also happens to be married to the principal, has been charged with with having had sexual contact with a male student during an overnight school camping trip. Will We Ever Notice Boys' Struggles?