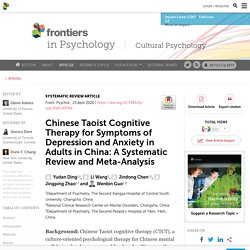 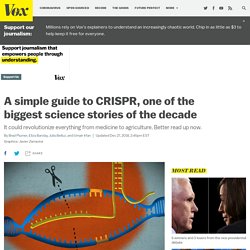 So this is as good a time as any to get acquainted with the powerful new gene editing technology known as CRISPR. If you haven’t heard of CRISPR yet, the short explanation goes like this: In the past nine years, scientists have figured out how to exploit a quirk in the immune systems of bacteria to edit genes in other organisms — plants, mice, even humans. From Linkage to Association Gene-Mapping. The applications of genetic linkage and association analysis. Genetic linkage and association analyses are the major tools to identify the genetic basis of diseases or traits. 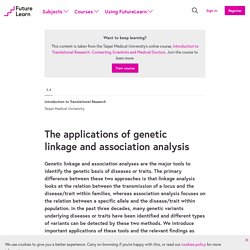 The primary difference between these two approaches is that linkage analysis looks at the relation between the transmission of a locus and the disease/trait within families, whereas association analysis focuses on the relation between a specific allele and the disease/trait within population. In the past three decades, many genetic variants underlying diseases or traits have been identified and different types of variants can be detected by these two methods. The Role of Cognitive Dissonance in the Pandemic. 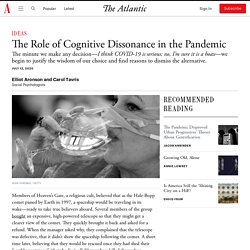 What would happen if you didn’t sleep? - Claudia Aguirre. Kissing, explained. Learning styles & the importance of critical self-reflection. The punishing signal Horn not okay, please! Mumbai Police. Are Colors Real? Amy Orben: ‘To talk about smartphones affecting the brain is a slippery slope’

Amy Orben is a research fellow at Emmanuel College and the MRC Cognition and Brain Sciences Unit at the University of Cambridge. 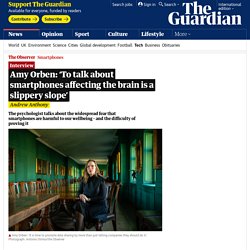 She works in the field of experimental psychology and her speciality is analysing large-scale datasets to determine how social media and the use of digital technology affect the wellbeing of teenagers. Her latest paper, co-written with Prof Andrew Przybylski, looks at teenage sleep and technology engagement. In recent years there has been a great deal of speculation about the possible harmful effects of digital technology, particularly smartphones, on mental health, the ability to concentrate, and sleep patterns.

Panicking About Your Kids’ Phones? New Research Says Don’t. SAN FRANCISCO — It has become common wisdom that too much time spent on smartphones and social media is responsible for a recent spike in anxiety, depression and other mental health problems, especially among teenagers. 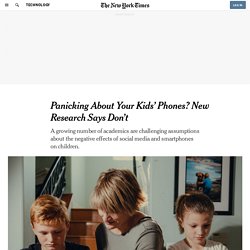 But a growing number of academic researchers have produced studies that suggest the common wisdom is wrong. The latest research, published on Friday by two psychology professors, combs through about 40 studies that have examined the link between social media use and both depression and anxiety among adolescents. That link, according to the professors, is small and inconsistent. “There doesn’t seem to be an evidence base that would explain the level of panic and consternation around these issues,” said Candice L. Odgers, a professor at the University of California, Irvine, and the lead author of the paper, which was published in the Journal of Child Psychology and Psychiatry. But some researchers question whether those fears are justified. The new article by Ms. Mr. If this has been super-decade, why are we still so angry? Editor’s note: The opinions in this article are the author’s, as published by our content partner, and do not necessarily represent the views of MSN or Microsoft. © ap A "Happy New Year" hat lies on the wet ground along with other items following the celebration… There is a strong case to be made that things are getting better. 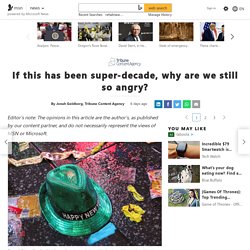 Load Error. What’s so fascinating about weird children’s TV shows? - BBC Future. If ‘Pain Is an Opinion,’ There Are Ways to Change Your Mind. How Google Interferes With Its Search Algorithms and Changes Your Results. Why smart people do stupid things - BBC Ideas. (35) Stress, Portrait of a Killer - Full Documentary (2008) What Statistics Can and Can’t Tell Us About Ourselves  Harold Eddleston, a seventy-seven-year-old from Greater Manchester, was still reeling from a cancer diagnosis he had been given that week when, on a Saturday morning in February, 1998, he received the worst possible news. 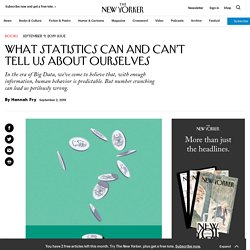 He would have to face the future alone: his beloved wife had died unexpectedly, from a heart attack. Eddleston’s daughter, concerned for his health, called their family doctor, a well-respected local man named Harold Shipman. He came to the house, sat with her father, held his hand, and spoke to him tenderly. Being depressed in the 'world's happiest country' - BBC Worklife - aplakmeyer - IST Mail. Neurocapitalism: Facebook and Neuralink are building brain-reading tech. “Nothing was your own except the few cubic centimeters inside your skull.” 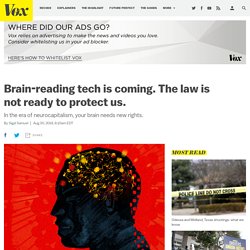 That’s from George Orwell’s dystopian novel 1984, published in 1949. The comment is meant to highlight what a repressive surveillance state the characters live in, but looked at another way, it shows how lucky they are: At least their brains are still private. Over the past few weeks, Facebook and Elon Musk’s Neuralink have announced that they’re building tech to read your mind — literally. Mark Zuckerberg’s company is funding research on brain-computer interfaces (BCIs) that can pick up thoughts directly from your neurons and translate them into words.

The researchers say they’ve already built an algorithm that can decode words from brain activity in real time. Many Genes Influence Same-Sex Sexuality, Not a Single ‘Gay Gene’ The researchers also looked at answers to other questions in the 23andMe survey, including people’s sexual identity and what gender they fantasized about.

There, they found considerable genetic overlap between those results and whether people ever engaged in same-sex sex, suggesting that these aspects of sexual orientation share common genetics, they said. Dean Hamer, a former National Institutes of Health scientist who led the first high-profile study identifying a genetic link to being gay in 1993, said he was happy to see such a large research effort. “Having said that, I’d like to emphasize that it’s not a gay gene study — it’s a study of what makes people have a single same-sex experience or more,” said Dr. Hamer, now an author and filmmaker. The gene he identified was on the X chromosome, one of the sex chromosomes, a location the new study did not flag as being significant for same-sex sexual behavior. (35) Statistics Say Screens Aren't Destroying Today's Teens. Sleep is your superpower - aplakmeyer - IST Mail.