Lena Wilderäng - This needs sharing again! Happiness... Hack your happy chemicals: 11 surprising ways to get your brain to release endorphins, serotonin and dopamine. Listening to the music you love will make your brain release more dopamine, study finds. A new study has found that dopamine — a neurotransmitter that plays an important role in our cognitive, emotional, and behavioral functioning — plays a direct role in the reward experience induced by music. 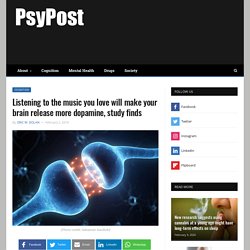 The new findings have been published in the Proceedings of the National Academy of Sciences. “In everyday life, humans regularly seek participation in highly complex and pleasurable experiences such as music listening, singing, or playing, that do not seem to have any specific survival advantage. Understanding how the brain translates a structured sequence of sounds, such as music, into a pleasant and rewarding experience is thus a challenging and fascinating question,” said study author Laura Ferreri, an associate professor in cognitive psychology at Lyon University. “In the scientific literature, there was a lack of direct evidence showing that dopamine function is causally related to music-evoked pleasure.

10 Ways To Boost Serotonin Levels Without Medication. The Facts:A 2010 HHS pilot study by the Federal Agency for Health Care Research (AHCR) found that 1 in every 39 vaccines causes injury, a shocking comparison to the claims from the CDC of 1 in every million.Reflect On:Are vaccines really as safe as they're marketed to be? 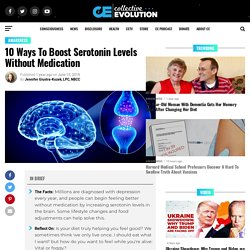 We are constantly told that vaccines are safe and effective and that there’s nothing to worry about. This simply isn’t the case, and it’s a hard-to-swallow truth that many people refuse to acknowledge. Mass marketing campaigns portray vaccines in a ‘God-like’ light, and the science is being ignored. The truth is that vaccines are actually exempt from double blind placebo controlled studies and they have not been put through appropriate safety testing. Chronic inflammation removes motivation by reducing dopamine in the brain. Why do we feel listless when we are recovering from an illness? 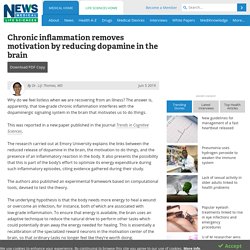 The answer is, apparently, that low-grade chronic inflammation interferes with the dopaminergic signaling system in the brain that motivates us to do things. The research carried out at Emory University explains the links between the reduced release of dopamine in the brain, the motivation to do things, and the presence of an inflammatory reaction in the body. It also presents the possibility that this is part of the body’s effort to optimize its energy expenditure during such inflammatory episodes, citing evidence gathered during their study.

The authors also published an experimental framework based on computational tools, devised to test the theory. The underlying hypothesis is that the body needs more energy to heal a wound or overcome an infection, for instance, both of which are associated with low-grade inflammation. Image Copyright: Meletios, Image ID: 71648629 via shutterstock.com Source: Treadway M. Serotonin and Anti-depressant Drug Alter the Gut’s Microbiota. A new study in mice led by UCLA biologists strongly suggests that serotonin and drugs that target serotonin, such as anti-depressants, can have a major effect on the gut’s microbiota — the 100 trillion or so bacteria and other microbes that live in the human body’s intestines. 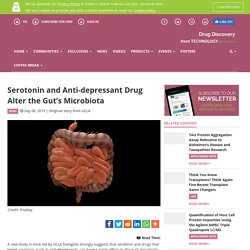 Serotonin — a neurotransmitter, or chemical messenger that sends messages among cells — serves many functions in the human body, including playing a role in emotions and happiness. An estimated 90% of the body’s serotonin is produced in the gut, where it influences gut immunity. The team — led by senior author Elaine Hsiao and lead author Thomas Fung, a postdoctoral fellow — identified a specific gut bacterium that can detect and transport serotonin into bacterial cells. 11 Benefits of Hugging – Backed By Chemistry. Chronic inflammation removes motivation by reducing dopamine in the brain. Neuroscientist Explains How Orgasms Can Be Used To Reach An ‘Altered State of Consciousness’

11 ways to increase the serotonin in your brain (naturally) Serotonin System Malfunction Could Be an Early Warning for Parkinson's. Brain imaging showing loss in serotonin function as Parkinson's disease progresses. 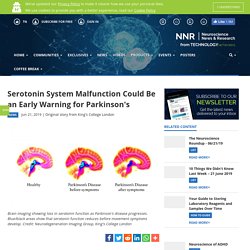 Blue/black areas show that serotonin function reduces before movement symptoms develop. Credit: Neurodegeneration Imaging Group, King's College London Researchers from King’s College London have uncovered the earliest signs of Parkinson’s disease in the brain, many years before patients show any symptoms. The results, published in The Lancet Neurology, challenge the traditional view of the disease and could potentially lead to screening tools for identifying people at greatest risk. Parkinson’s disease is the second most common neurodegenerative disorder, after Alzheimer’s disease. 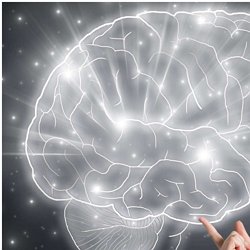 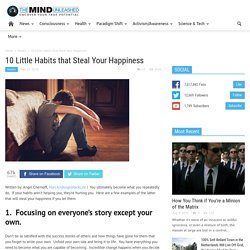 Focusing on everyone’s story except your own. Don’t be so satisfied with the success stories of others and how things have gone for them that you forget to write your own. Unfold your own tale and bring it to life. You have everything you need to become what you are capable of becoming. Incredible change happens when you decide to take control. If you want your life story to soar to new heights, you’ve got to clear a path, reduce the time-sinks and burdens weighing you down, and pick up the things that give you wings. 2. 'Dopamine Fasting' Is Silicon Valley's Latest Trend. Here's What an Expert Has to Say. It's the latest fad in Silicon Valley.

By reducing the brain's feel-good chemical known as dopamine – cutting back on things like food, sex, alcohol, social media and technology – followers believe that they can "reset" the brain to be more effective and appreciate simple things more easily. Some even go so far as avoiding all social activities, and even eye contact. The exercise, dubbed "dopamine fasting" by San Francisco psychologist Dr Cameron Sepah, is now getting increasing international attention. But what exactly is it? And does it work?