Bias. List of cognitive biases. Cognitive biases are systematic deviations from a standard of rationality or good judgment, often confirmed by research in psychology and behavioral economics . 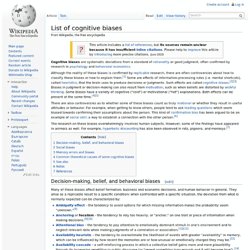 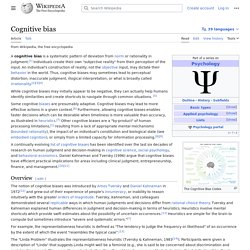 Cognitive biases may lead to more effective actions in a given context.[6] Furthermore, allowing cognitive biases enable faster decisions which can be desirable when timeliness is more valuable than accuracy, as illustrated in heuristics.[7] Other cognitive biases are a "by-product" of human processing limitations,[8] resulting from a lack of appropriate mental mechanisms (bounded rationality), or simply from a limited capacity for information processing.[9][10] A continually evolving list of cognitive biases has been identified over the last six decades of research on human judgment and decision-making in cognitive science, social psychology, and behavioral economics.

Kahneman and Tversky (1996) argue that cognitive biases have efficient practical implications for areas including clinical judgment, entrepreneurship, finance, and management.[11][12] Overview[edit] Types[edit] List of memory biases. The 12 cognitive biases that prevent you from being rational. Top 10 Thinking Traps Exposed — How to Foolproof Your Mind, Part I.

Our minds set up many traps for us. Unless we’re aware of them, these traps can seriously hinder our ability to think rationally, leading us to bad reasoning and making stupid decisions. Features of our minds that are meant to help us may, eventually, get us into trouble. Top 10 Common Faults In Human Thought. Humans The human mind is a wonderful thing. 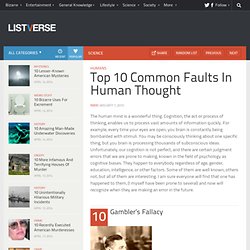 Cognition, the act or process of thinking, enables us to process vast amounts of information quickly. For example, every time your eyes are open, you brain is constantly being bombarded with stimuli. You may be consciously thinking about one specific thing, but you brain is processing thousands of subconscious ideas. 8 Common Thinking Mistakes Our Brains Make Every Day and How to Prevent Them. 12.3K Flares Filament.io 12.3K Flares × Get ready to have your mind blown. 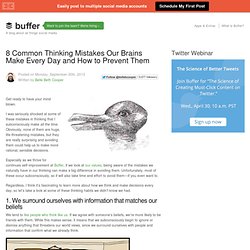 I was seriously shocked at some of these mistakes in thinking that I subconsciously make all the time. Obviously, none of them are huge, life-threatening mistakes, but they are really surprising and avoiding them could help us to make more rational, sensible decisions. Especially as we thrive for continues self-improvement at Buffer, if we look at our values, being aware of the mistakes we naturally have in our thinking can make a big difference in avoiding them. Unfortunately, most of these occur subconsciously, so it will also take time and effort to avoid them—if you even want to. 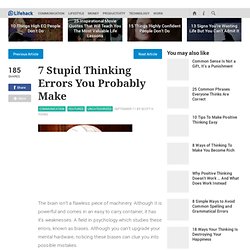 Although it is powerful and comes in an easy to carry container, it has it’s weaknesses. A field in psychology which studies these errors, known as biases. Confirmation Bias. People search for information that confirms their view of the world and ignore what doesn’t fit. 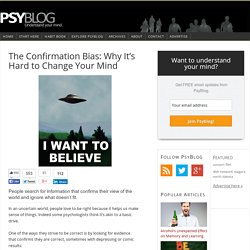 In an uncertain world, people love to be right because it helps us make sense of things. Indeed some psychologists think it’s akin to a basic drive. One of the ways they strive to be correct is by looking for evidence that confirms they are correct, sometimes with depressing or comic results: A woman hires a worker that turns out to be incompetent. She doesn’t notice that everyone else is doing his work for him because she is so impressed that he shows up every day, right on time.A sports fan who believes his team is the best only seems to remember the matches they won and none of the embarrassing defeats to inferior opponents.A man who loves the country life, but has to move to the city for a new job, ignores the flight-path he lives under and noisy-neighbours-from-hell and tells you how much he enjoys the farmer’s market and tending his window box. 1.

The Worse-Than-Average Effect: When You're Better Than You Think. People underestimate their ability at stereotypically difficult tasks like playing chess, telling jokes, juggling or computer programming. Recently I covered the Dunning-Kruger effect which explains why the incompetent don’t know they’re incompetent. But there’s a flip-side to the Dunning-Kruger: sometimes the competent don’t know when they’re competent. This is the worse-than-average effect. This means that when you’re good at something, you tend to assume that other people are good at it as well. So, when you’re faced with a difficult task that you are good at, you underestimate your own ability.

It doesn’t just kick in when we have special skills, but also when we think that the odds are long, say because the task is particularly difficult. On the other hand they overestimate their ability at stereotypically easy tasks like using a mouse, driving a car or riding a bicycle. Attribution: How We Explain Behavior. In social psychology, attribution is the process of inferring the causes of events or behaviors. 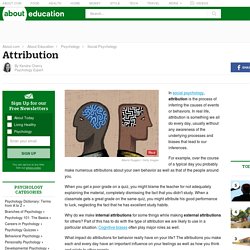 In real life, attribution is something we all do every day, usually without any awareness of the underlying processes and biases that lead to our inferences. For example, over the course of a typical day you probably make numerous attributions about your own behavior as well as that of the people around you. When you get a poor grade on a quiz, you might blame the teacher for not adequately explaining the material, completely dismissing the fact that you didn't study. When a classmate gets a great grade on the same quiz, you might attribute his good performance to luck, neglecting the fact that he has excellent study habits. 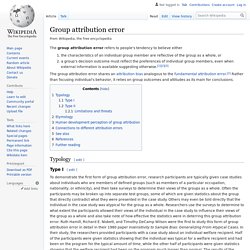 The fundamental attribution error is similar in that it refers to the tendency to believe that an individual's actions are representative of the individual's preferences, even when available information suggests that the actions were caused by outside forces. Type I[edit] How to Minimize Your Biases When Making Decisions - Robert F. Wolf. By Robert F. 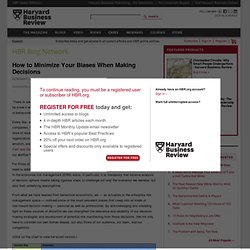 Wolf | 11:00 AM September 24, 2012 “There is always an easy solution to every human problem — neat, plausible, and wrong.” Little did he know it when he penned these words, but journalist H.L. Mencken was tapping into the very core of behavioral decision making and the need to understand and compensate for it. Every day, senior managers are tasked with making very significant strategic decisions for their companies, which usually require support by teams of internal and external experts and a heavy dose of research. Welcome to Less Wrong. Cognitive distortion. Psychiatrist Aaron T. 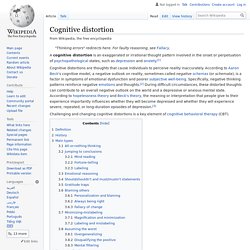