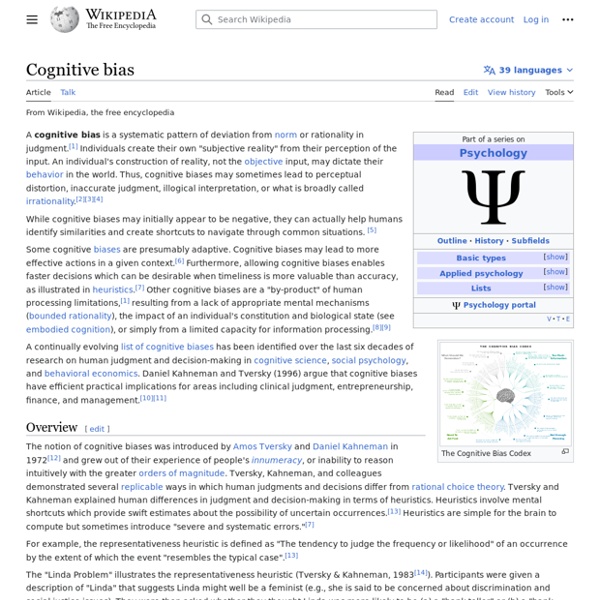 Some cognitive biases are presumably adaptive. Cognitive biases may lead to more effective actions in a given context.[6] Furthermore, allowing cognitive biases enable faster decisions which can be desirable when timeliness is more valuable than accuracy, as illustrated in heuristics.[7] Other cognitive biases are a "by-product" of human processing limitations,[8] resulting from a lack of appropriate mental mechanisms (bounded rationality), or simply from a limited capacity for information processing.[9][10] A continually evolving list of cognitive biases has been identified over the last six decades of research on human judgment and decision-making in cognitive science, social psychology, and behavioral economics. Kahneman and Tversky (1996) argue that cognitive biases have efficient practical implications for areas including clinical judgment, entrepreneurship, finance, and management.[11][12] Overview[edit] Types[edit] Biases can be distinguished on a number of dimensions. List[edit] Related:  Cognitive Bias & Logical Fallacies

Endowment effect In behavioral economics, the endowment effect (also known as divestiture aversion) is the hypothesis that people ascribe more value to things merely because they own them.[1] This is illustrated by the observation that people will tend to pay more to retain something they own than to obtain something owned by someone else—even when there is no cause for attachment, or even if the item was only obtained minutes ago. Examples[edit] One of the most famous examples of the endowment effect in the literature is from a study by Kahneman, Knetsch & Thaler (1990)[2] where participants were given a mug and then offered the chance to sell it or trade it for an equally priced alternative good (pens). Kahneman et al. (1990)[2] found that participants' willingness to accept compensation for the mug (once their ownership of the mug had been established) was approximately twice as high as their willingness to pay for it. Background[edit] Theoretical explanations[edit] Loss aversion[edit] Criticisms[edit]

What Is a Cognitive Bias? When we are making judgments and decisions about the world around us, we like to think that we are objective, logical, and capable of taking in and evaluating all the information that is available to us. The reality is, however, that our judgments and decisions are often riddled with errors and influenced by a wide variety of biases. The human brain is both remarkable and powerful, but certainly subject to limitations. One type of fundamental limitation on human thinking is known as a cognitive bias. A cognitive bias is a type of error in thinking that occurs when people are processing and interpreting information in the world around them. Cognitive biases can be caused by a number of different things. These biases are not necessarily all bad, however. Cognitive Bias vs. People sometimes confuse cognitive biases with logical fallacies, but the two are not the same. A Few Types of Cognitive Biases More Psychology Definitions: The Psychology Dictionary Browse the Psychology Dictionary

List of cognitive biases Systematic patterns of deviation from norm or rationality in judgment The loss aversion cognitive bias has been shown in monkeys Cognitive biases are systematic patterns of deviation from norm and/or rationality in judgment. They are often studied in psychology and behavioral economics.[1] Although the reality of most of these biases is confirmed by reproducible research,[2][3] there are often controversies about how to classify these biases or how to explain them.[4] Gerd Gigerenzer has criticized the framing of cognitive biases as errors in judgment, and favors interpreting them as arising from rational deviations from logical thought.[5] Explanations include information-processing rules (i.e., mental shortcuts), called heuristics, that the brain uses to produce decisions or judgments. There are also controversies over some of these biases as to whether they count as useless or irrational, or whether they result in useful attitudes or behavior. Social biases[edit] See also[edit] [edit]

Bounded rationality Bounded rationality is the idea that in decision-making, rationality of individuals is limited by the information they have, the cognitive limitations of their minds, and the finite amount of time they have to make a decision. It was proposed by Herbert A. Simon as an alternative basis for the mathematical modeling of decision making, as used in economics, political science and related disciplines; it complements rationality as optimization, which views decision-making as a fully rational process of finding an optimal choice given the information available.[1] Another way to look at bounded rationality is that, because decision-makers lack the ability and resources to arrive at the optimal solution, they instead apply their rationality only after having greatly simplified the choices available. Some models of human behavior in the social sciences assume that humans can be reasonably approximated or described as "rational" entities (see for example rational choice theory). Origins[edit]

New Orleans five years later FIVE YEARS AGO today, hell was unleashed on New Orleans. The storm surge created by the winds and rains of Hurricane Katrina overwhelmed the city's levee system, which the Army Corps of Engineers had poorly designed and poorly maintained. For days, with much of the city flooded, people pleaded for help from rooftops, the Superdome and the convention center. Scenes of depravation, desperation and death shocked the nation and the world. Of course, New Orleans wasn't the only site of devastation. Still, when Air Force One touches down Sunday, President Obama will alight on a New Orleans that is recovering -- from Hurricane Katrina, the recession and this year's oil spill in the Gulf of Mexico as well. People who fled are coming home. Potential improvements in the public education system are perhaps the most encouraging aspect of New Orleans's recovery. Many challenges remain. Coastal restoration is another challenge.

Being Really, Really, Ridiculously Good Looking “I’m pretty sure there’s a lot more to life than being really, really, ridiculously good looking. And I plan on finding out what that is.”~Derek Zoolander, Zoolander Humans like attractive people. Those blessed with the leading man looks of Brad Pitt or the curves of Beyonce can expect to make, on average, 10% to 15% more money over the course of their life than their more homely friends. This insight is not lost on Madison Avenue or Hollywood. Abercrombie & Fitch might be able to sell more clothes by having good-looking sales associates, but is that legal? The surprising answer is none. Is that a problem? The Science of Beauty Beauty is often considered subjective and “in the eye of the beholder.” To some extent this is true. However, academic work on beauty finds that much of what we find attractive is consistent over time and across cultures. More evidence of a universal, objective basis for beauty comes from studies of babies presented with pictures of different faces. The Halo Effect