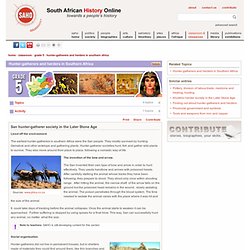 They mostly survived by hunting Gemsbok and other antelope and gathering plants. Hunter-gatherer societies hunt, fish and gather wild plants to survive. They also move around from place to place, following a nomadic way of life. Sources: www.phiva.co.za. Creswell Crags Museum and Visitor Centre - Inspiring and educational guided cave tours. List of Animals of the Stone Age.

Email What Animals Lived During the Stone Age? 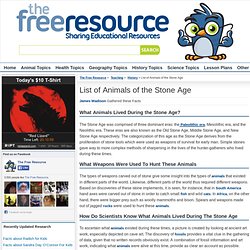 The Stone Age was comprised of three dominant eras: the Paleolithic era, Mesolithic era, and the Neolithic era. These eras are also known as the Old Stone Age, Middle Stone Age, and New Stone Age respectively. The categorization of this age as the Stone Age derives from the proliferation of stone tools which were used as weapons of survival for early man. Simple stones gave way to more complex methods of sharpening in the lives of the hunter-gatherers who lived during these times. What Weapons Were Used To Hunt These Animals. Prehistoric - food facts - History cookbook. Prehistoric Animals - After the Dinosaurs. Victorian Times. Key Stage 2 Primary School History Stone Age and Iron Age. History Interactive Quick Links Prehistoric Britain Interactive. 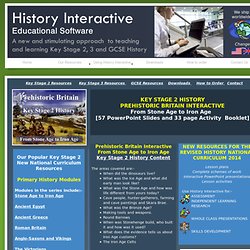 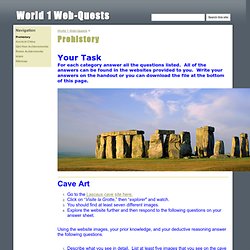 All of the answers can be found in the websites provided to you. Write your answers on the handout or you can download the file at the bottom of this page. Cave Art Go to the Lascaux cave site here.Click on “Visite la Grotte,” then “explorer" and watch.You should find at least seven different images.Explore the website further and then respond to the following questions on your answer sheet.Using the website images, your prior knowledge, and your deductive reasoning answer the following questions.

Human Origin How long ago did humans begin to venture out of Africa (introduction)Between 200,000 and 60,000BCE, where had early man migrated? Out of Africa Migration Theory Click on the map below. How many years ago did hominids first migrate out of Africa? Ardie Watch the short video clip below about Ardie and answer the two questions. Who is Ardie? Laetoli footprints Watch is short clip and answer these questions. Lucy Stonehenge. Hands on History - Ancient Britain: Activities for Families and Groups. 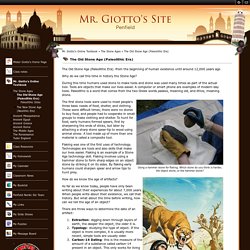 During this time humans used stone to make tools and stone was used many times as part of the actual tool. Tools are objects that make our lives easier. A computer or smart phone are examples of modern-day tools. Paleolithic is a word that comes from the two Greek words palaios, meaning old, and lithos, meaning stone. Using a hammer stone for flaking. Stone age. Ancient History. History: The Stone Ages. Global rating average: 0.0 out of 50.00.00.00.00.0 These websites are all about the period of time known as the Stone Age. 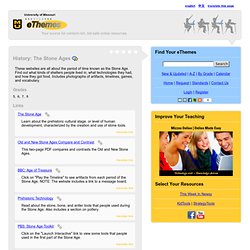 Find out what kinds of shelters people lived in, what technologies they had, and how they got food. Includes photographs of artifacts, timelines, games, and vocabulary. Grades. On the Stone Age. Art of the Stone Age - The Stone Age. Lascaux. The discovery of the monumental Lascaux cave in 1940 brought with it a new era in our knowledge of both prehistoric art and human origins. Today, the cave continues to feed our collective imagination and to profoundly move new generations of visitors from around the world. To celebrate this prehistoric wonder, the French Ministry of Culture and Communication's is pleased to present its latest multimedia publication – an update of the original Lascaux website, which was first put on line in 1998. The new site has been entirely reworked in both form and content, reflecting the latest advances in archaeological research. Visitors to the site are presented with a three-dimensional digital version of the cave, which allows them to go from room to room, completely immersed in the site.

The Cosquer Cave. A Historical Lie: The Stone Age. The Advanced Art in Caves Evolutionists maintain that some 30-40,000 years ago in Europe, and in a rather earlier period in Africa, so-called ape-like humans experienced a sudden process of transition, and suddenly acquired the ability to think and produce things, just like modern human beings. 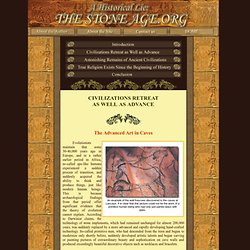 This is because archaeological findings from that period offer significant evidence that the theory of evolution cannot explain. According to Darwinist claims, the technology of stone implements, which had remained unchanged for almost 200,000 years, was suddenly replaced by a more advanced and rapidly developing hand-crafted technology. So-called primitive man, who had descended from the trees and begun to modernize only shortly before, suddenly developed artistic talents and began carving or painting pictures of extraordinary beauty and sophistication on cave walls and produced exceedingly beautiful decorative objects such as necklaces and bracelets.

What happened to cause such development? Victorian Times. Tools And The Stone Age - World History For Kids. Tools and the Stone Age One of the most important advancements in human history was the development and use of tools. 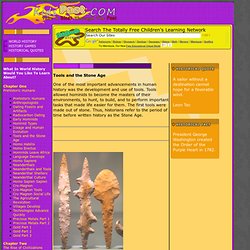 Tools allowed hominids to become the masters of their environments, to hunt, to build, and to perform important tasks that made life easier for them. The Stone Age. The Stone Age Prehistoric cultural stage, or level of human development, characterized by the creation and use of stone tools. 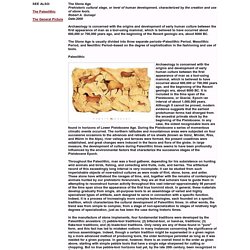 Robert A. Guisepi Date:2000 Archaeology is concerned with the origins and development of early human culture between the first appearance of man as a tool-using mammal, which is believed to have occurred about 600,000 or 700,000 years ago, and the beginning of the Recent geologic era, about 8000 BC. Early Stone Age Tools. The earliest stone toolmaking developed by at least 2.6 million years ago. 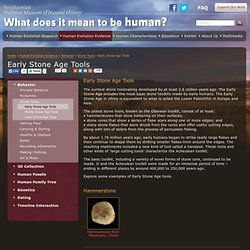 The Early Stone Age includes the most basic stone toolkits made by early humans. The Early Stone Age in Africa is equivalent to what is called the Lower Paleolithic in Europe and Asia. The oldest stone tools, known as the Oldowan toolkit, consist of at least: • hammerstones that show battering on their surfaces; • stone cores that show a series of flake scars along one or more edges; and • sharp stone flakes that were struck from the cores and offer useful cutting edges, along with lots of debris from the process of percussion flaking. By about 1.76 million years ago, early humans began to strike really large flakes and then continue to shape them by striking smaller flakes from around the edges.

The resulting implements included a new kind of tool called a handaxe. Stone Age axes. Making stone age tools. How our ancestors made Stone Age tools Early in human evolution people discovered that stone can be used to make tools. They found that flint, which is close behind diamond in hardness, fractures easily to give razor sharp edges. In the Palaeolithic period, or early stone age, humans developed great skill at fashioning beautiful tools such as the hand axes shown right. People were nomadic hunter-gatherers who probably made tools on the spot to skin and butcher large game. Later, in the Mesolithic or middle stone age, still nomadic, people developed skills at making flake tools including tiny Microliths that could be mounted in a wooden shaft to make arrows or spears and the first purpose-designed carpentry tools like the Tranchet adze (right).

STAGE= Phase, part of a process. THE STONE AGE REPORT= It is a parody of the weather report (or weather forecast) but talking about the Stone Age. BELIEVE IT OR NOT= We use this expression when we are going to say something shocking, hard to believe, but we assure it’s true. PLENTY= A lot, more than enough. 6 FOOT 1= 1 foot = 0.305 metres, so 6.1 feet is 1.86 ms. HE IS TONS OF FUN= He is great fun, it’s a lot of fun with him. HARD AS NAILS= A common expression meaning “very hard”, very tough, strong. IT’S ALL JOLLY GOOD FUN= It’s all tons of fun (“jolly” is emphasizing). THE MELTING ICE= The ice which is melting. MEGABEARS= Very big bears (the prefix MEGA- is a Greek word meaning “very big”). Facts For Kids, History « kinooze. The Stone Age was a time thousands of years ago, when humans lived in caves and jungles. Life was simple, and there were only two main things to do – to protect themselves from the wild animals and to gather food. It started almost with the evolution of mankind.

For both purposes, people made tools from stone. The oldest stone tool that we have as an evidence is almost 3.4 million years old . It was found in Lower Awash Valley in Ethiopia. Inquiry T2 2014. Stone age man, fire and tools.