Sandy Stone. Transgender Feminism. 2006 1/5. The Empire Strikes Back: A Posttranssexual Manifesto. “One of Stone’s goals in critiquing previous representations of transsexualism was to encourage new forms of self-expression capable of revealing the deep and powerful ways we all construct a sense of self in reference to our particular form of embodiment” -Susan Stryker and Stephen Whittle Sandy Stone’s essay, The Empire Strikes Back: A Posttranssexual Manifesto, functions as an exceptionally effective rebuttal to Janice Raymond’s The Transsexual Empire in that, rather than attempt to disavow Raymond’s arguments on her own terms (which we’ve discussed in class as being inescapably problematic), Stone lays out a new framework for future theory, thought, and commentary on studies pertaining to, about, and by trans* individuals.

I find manifestos to be unusually complex. By definition, manifestos speak on the intentions and politics of a specific group of individuals and are written by one or a sum of those individuals themselves. The Empire Strikes Back - A Posttranssexual Manifesto - NM3225 Critical Approaches to New Media - Wiki.nus. Author: Sandy Stone aka Allucquere Rosanne Stone Publication: First version: 1987 First published in Kristina Straub and Julia Epstein, eds.: "Body Guards: The Cultural Politics of Gender Ambiguity" (New York: Routledge 1991) Second version: 1994.

Trans%20manifesto.pdf. Sandy Stone (artist) Stone was assigned male at birth in Jersey City, New Jersey in 1936.[3] She has stated her original name was "Zelig Ben-Nausaan Cohen in Hebrew. 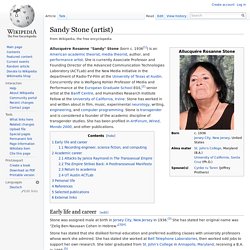 "[3][4] In the late 1960s Stone moved to New York City and embarked on a career as a recording engineer, initially on the East Coast, and later on the West Coast. In 1969, Stone wrote about an April 7 recording session at Record Plant Studios with Jimi Hendrix for Zygote magazine.[6] According to journalist David S. Jeffreys_Beauty_and_Misogyny_Harmful_Cultural_Practices_in_the_West__Women_and_Psychology_1.pdf. 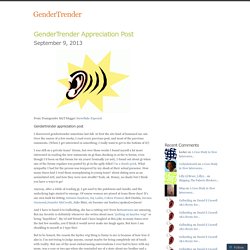 At first the site kind of bummed me out. Over the course of a few weeks, I read every previous post, and most of the previous comments. (When I get interested in something, I really want to get to the bottom of it!) I was still on a private trans* forum, but over those weeks I found myself a lot more interested in reading the new comments on gt than checking in at the ts forum, even though I’d been on that forum for six years! Ironically (or not), I found out about gt when one of the forum regulars was posted by gt in the aptly titled I’m a dumb prick. Ameliated: All I want is to be respected as a... 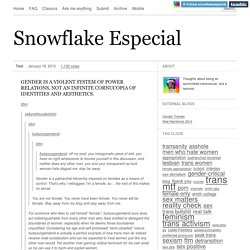 Also, I added a (very short) FAQ, and a “Classics” link. I like this theme in general, but the one thing I don’t like is that if you go to a specific post, there are no buttons for next post/previous post. Le mythe végétarien, ou pourquoi le végétarisme ne sauvera pas le monde. « Le mythe végétarien », un livre incroyablement stupide. Lierre Keith - Writer. Farmer. Feminist activist. - Home. Talk:Lierre Keith. Removal of the "pie incident"[edit] Although it was fairly well sourced, I've removed mention of the pieing because of biography of living persons concerns about legal actions being taken as a result of the incident. 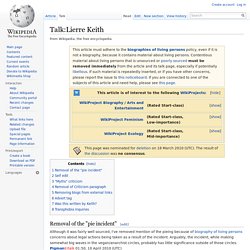 Arguably, the incident, while making somewhat big waves in the vegan/anarchist circles, probably has little significance outside of those circles. Pigman☿/talk 01:50, 10 April 2010 (UTC) Well, the problem is, it's notable. Since this person is almost solely involved in those circles, of course your right it is notable in those circles. Lierre Keith. Lierre Keith /liˈɛər/ is an American writer, radical feminist, food activist, and radical environmentalist. 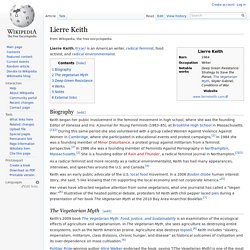 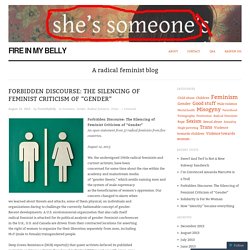 August 12, 2013 We, the undersigned 1960s radical feminists and current activists, have been concerned for some time about the rise within the academy and mainstream media of “gender theory,” which avoids naming men and the system of male supremacy as the beneficiaries of women’s oppression. Our concern changed to alarm when we learned about threats and attacks, some of them physical, on individuals and organizations daring to challenge the currently fashionable concept of gender. Recent developments: A U.S. environmental organization that also calls itself radical feminist is attacked for its political analysis of gender.

Forbidden Discourse: The Silencing of Feminist Criticism of “Gender” August 18, 2013 WARNING: The authenticity of this letter has been called into question. 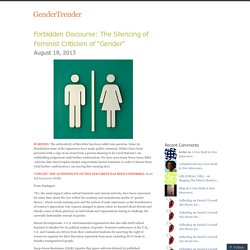 Since its distribution none of the signatories have made public comment. While I have been provided with a copy of an email from a person claiming to be Carol Hanisch I am withholding judgement until further confirmation. Feministsfightingtransphobia. A Statement of Trans-Inclusive Feminism and Womanism. We are proud to present a collective statement that is, to our knowledge (and we would love to be wrong about this) the first of its kind. 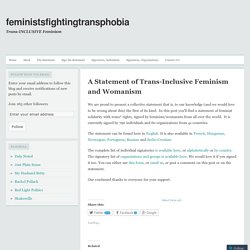 In this post you’ll find a statement of feminist solidarity with trans* rights, signed by feminists/womanists from all over the world. It is currently signed by 790 individuals and 60 organizations from 41 countries. The statement can be found here in English. It is also available in French, Hungarian, Norwegian, Portuguese, Russian and Serbo-Croatian. A Gender Critical Response to: A Statement of Trans-Inclusive Feminism and Womanism. This is my response to the reactionary and misguided “A Statement of Trans-Inclusive Feminism and Womanism” (The Statement) posted at FeministsFightingTransphobia.wordpress.com. We can all agree, I think, that people’s actual lives are more important than theoretical abstractions– including those related to “identity.” This is precisely why, as feminists, we demand acknowledgement for the lived realities and material conditions of women’s lives, including the social mechanics of sex-and-gender-assignment that ultimately give rise to women’s oppression.

But beyond this, there are a truly alarming number of misrepresentations, inconsistencies, and logical errors in The Statement. I will address many of them below. It’s time to end divisive rhetoric on sex and gender and create a trans-inclusive feminism. Sheila Jeffreys, a long-time feminist activist and professor of social and political science, is part of a group of radical feminists that oppose allowing transgender women into feminist and other women’s communities. She has published a new book titled Gender Hurts: A Feminist Analysis of the Politics of Transgenderism. The book, written in part with Lorene Gottschalk and drawing heavily on the work of Janice Raymond, spells out exactly why she and other radical feminists are opposed to “transgenderism” and seek to prevent trans women from entering “women-only” spaces. Jeffreys makes three main points. First, women are oppressed because of their sex, and the concepts of gender and gender identity are used to lock women into positions of subordination to men.

Second, “transgenderism” is a condition created by a medical system that seeks to reinforce traditional gender roles and generate profit through required therapy, hormone replacement, and surgeries. Gender Hurts: A Feminist Analysis of the Politics of Transgenderism (9780415539401): Sheila Jeffreys: Books. Sheila Jeffreys on Beauty Practices and Misogyny. Hello everybody, it’s terrific to be here, and to be invited to be here, for this Commemoration of Andrea Dworkin, because of course her politics and her writings have been enormously influential in my life.

And in fact, in Melbourne, we did have a little commemoration in a seminar series that I run, last year, and thirty-five women came together to read from various different books of hers saying how much they meant to them, and we got a great deal of what we have been hearing about here from Clare, which is women talking about how their lives were broken, and how reading the work of Andrea Dworkin healed them because of abuse and so on.

So we got a great deal of that at that evening seminar. And I also want to say a little bit about Right Wing Women, which is another very important book, from I think 1977. Sheila Jeffreys. Judith Butler addresses TERFs and the work of Sheila Jeffreys and Janice Raymond. Judith Butler is a preeminent gender theorist and has played an extraordinarily influential role in shaping modern feminism. She’s written extensively on gender and her concept of gender performativity is a central theme of both modern feminism and gender theory. Butler’s essays and books include Performative Acts and Gender Constitution (1988), Gender Trouble: Feminism and the Subversion of Identity (1990), Bodies That Matter: On the Discursive Limits of “Sex” (1993) and Undoing Gender (2004).

However, the concept of gender perfomativity has been used – and some would assert – abused to support a number of positions that misconstrues Butler’s work. I therefore wanted to ask Butler about what she really thinks about gender and the trans experience. Along the way Butler specifically addresses TERFs and the work of Sheila Jeffreys and Janice Raymond. The shame of Sheila Jeffreys’ hate. By Cristan Williams@cristanwilliams University of Melbourne Trans Exclusionary Radical Feminist (TERF), Sheila Jeffreys is being called out for her racist comments by the indigenous Australian community.

Jeffreys asserted on a radio show that being trans is like blackface. A genderqueer member of the Indigenous people of Australia, told the Star Observer: There is a fear that racist, misogynistic, queerphobic and transphobic people will take her message as truth and enact these prejudices against trans identified Indigenous and non-Indigenous peoples. By reducing transgender identities to that of histrionic mimicry is more reflective of her prejudice than it is of my understanding and practice of gender as a genderqueer Indigenous person. Let us be free to debate transgenderism without being accused of 'hate speech'