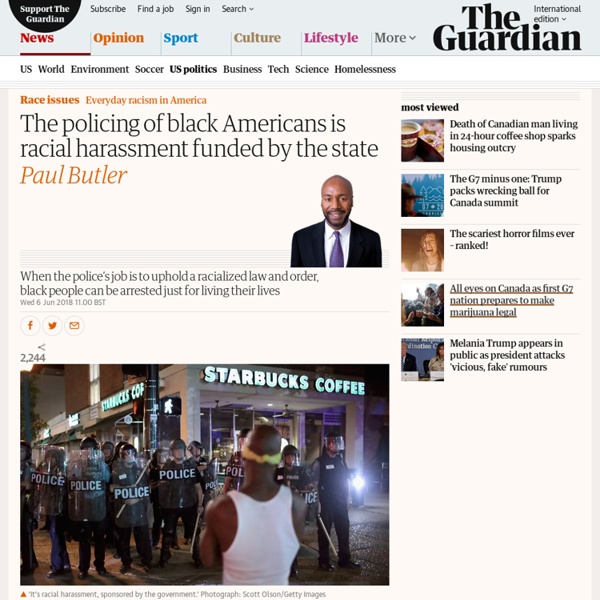 The rap group Public Enemy famously stated that “911 is a joke”. But that was in 1990. These days 911 is dead serious. Anyone in the United States can dial those three numbers and summon people with guns and handcuffs to participate in their anti-black paranoia. It’s racial harassment, sponsored by the government and supported by tax dollars. When one calls 911 in New York City, the first question the dispatcher asks is “What is your emergency?” The people who call the police are not the main problem. This does not mean that it is acceptable: everyday racism is aggravating, health draining, and, for its survivors, labor intensive. The people who call the police can fill a black person with a productive rage or a corrosive kind of hate. The main problem is the response of the state. Black people are forced, by armed officers of the government, to justify their presence. In recent cases, black people have offered excuses like “golfing”, “napping” and “moving”.

'They Choose a Name For Themselves' - Surnames in Slavery and Freedom In Western culture, our surnames are traditionally handed down along a patrimonial line. If Your father was a Smith, you are a Smith – if you are male, then your children will also be Smiths. While this was how it worked for most of European society, it was not allowed to cross over to the slaves held by that society. On Father's Day, 27 Vintage Photos of Dads Around the World As the U.S. prepares to celebrate Father’s Day on the third Sunday of June, these photos of dads around the world show that a father’s love is universal. Unlike Mother’s Day, which began to be widely observed in 1908 and was quickly recognized as an official national holiday by President Woodrow Wilson in 1914, Father’s Day took several decades to be declared a national holiday. It was first celebrated in 1910 in Washington state but wasn’t officially recognized until 1972, when it was acknowledged by President Richard Nixon. Studies have shown that beyond the ubiquitous parenting experiences of wiping away tears over a skinned knee or cheering on the sidelines of a sports game, dads can have specific and important impacts on the lives of their children. Fathers who do their share of work at home can help shape their daughters' career goals. Thank you for signing up!

Ants Among Elephants by Sujatha Gidla review – life as an ‘untouchable’ in modern India Not long ago, at a conference that brought together academics, writers and artists in Kochi in south India, the historian Vivek Dhareshwar unsettled his audience by saying that there was no such thing as caste – that it was a conceptual category the British used to understand and reduce India, which was internalised almost at once by Indians. “Caste” was not a translation of “jaati”, said Dhareshwar; “jaati” was a translation of “caste” – that is, the internalisation by Indians of the assumptions that the word caste involve meant they took its timelessness and authenticity for granted. Dhareshwar seemed to be implying – forcefully and outlandishly – that caste was at once a colonial inheritance and a habit of thinking, whose provenance no one felt the need to inquire into any longer. This was deeply nervous-making. There was one sense, though, in which Dhareshwar’s talk was necessary.

US history explains that white fear of black people is just another tool to enforce racial segregation University students often keep late hours—so it’s unsurprising to see them asleep amidst books and papers in libraries and common rooms. And yet, when a white Yale student saw Lolade Siyonbola, a black graduate student, had drifted off while writing a paper in their dorm’s common room, she assumed something was wrong—and called the police. The incident, which took place in the early morning hours of May 8, is one of several recent encounters to shine a spotlight on the daily realities of being black in a shared space. The US is stingier with child care and maternity leave than the rest of the world In most American families led by couples, both parents are in the workforce. At the same time, nearly 1 in 4 U.S. children are being raised by single moms. Yet child care is generally unaffordable and paid leave is not available to most U.S. parents.

Knowledge of different cultures shakes up psychology 2 clicks The academic discipline of psychology was developed largely in North America and Europe. Some would argue it’s been remarkably successful in understanding what drives human behaviour and mental processes, which have long been thought to be universal. But in recent decades some researchers have started questioning this approach, arguing that many psychological phenomena are shaped by the culture we live in. Clearly, humans are in many ways very similar – we share the same physiology and have the same basic needs, such as nourishment, safety and sexuality. So what effect can culture really have on the fundamental aspects of our psyche, such as perception, cognition and personality?

Growing Up Surrounded by Books Has a Lasting Positive Effect on the Brain, Says a New Scientific Study Image by George Redgrave, via Flickr Commons Somewhere in the annals of the internet--if this sprawling, near-sentient thing we call the internet actually has annals--there is a fine, fine quote by filmmaker John Waters: We need to make books cool again. Capitalism 101 - by Satwik Gade and Manasi Karthik Imperialism, suffering, and violence are a feature, not a flaw. by Satwik Gade and Manasi Karthik Posted Yesterday The book that fights sexism with science When young men and women come up against sexist stereotypes masquerading as science, Angela Saini wants them to be armed with the facts. “I call my book ammunition,” she says of her 288-page prize-winning work Inferior: The True Power of Women and the Science that Shows It. “There are people out there who insist that somehow the inequalities we see in society are not just because of historic discrimination, but also because of biology – the idea that there are factors within us that will cause men or women to be better at some things than others.”

Native cartography: a bold mapmaking project that challenges Western notions of place Aeon email newsletters are issued by the not-for-profit, registered charity Aeon Media Group Ltd (Australian Business Number 80 612 076 614). This Email Newsletter Privacy Statement pertains to the personally identifying information you voluntarily submit in the form of your email address to receive our email newsletters More generally, when visiting the Aeon site you should refer to our site Privacy Policy here. This Email Newsletter Privacy Statement may change from time to time and was last revised 5 June, 2018. By clicking ‘Subscribe’ you agree to the following: How Native American tribes are bringing back the bison from brink of extinction On 5,000 hectares of unploughed prairie in north-eastern Montana, hundreds of wild bison roam once again. But this herd is not in a national park or a protected sanctuary – they are on tribal lands. Belonging to the Assiniboine and Sioux tribes of Fort Peck Reservation, the 340 bison is the largest conservation herd in the ongoing bison restoration efforts by North America’s Indigenous people. The bison – or as Native Americans call them, buffalo – are not just “sustenance,” according to Leroy Little Bear, a professor at the University of Lethbridge and a leader in the bison restoration efforts with the Blood Tribe. The continent’s largest land mammal plays a major role in the spiritual and cultural lives of numerous Native American tribes, an “integrated relationship,” he said. Only a couple of hundred years ago, 20 million to 30 million bison lived in vast thundering herds across North America.