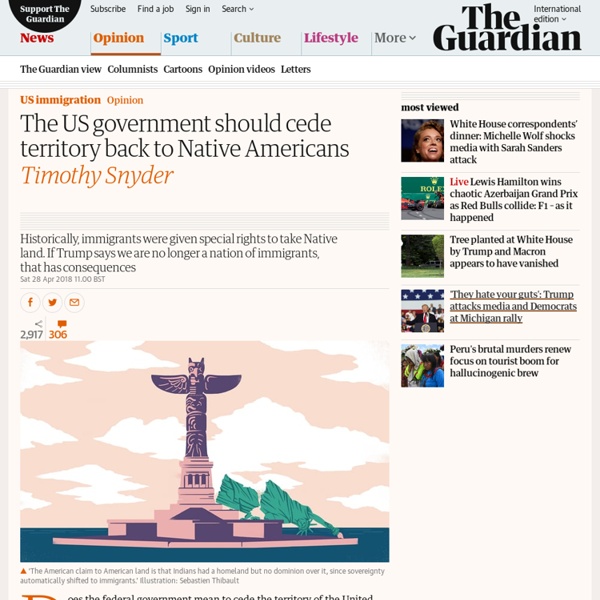 Does the federal government mean to cede the territory of the United States back to the Native Americans? The US Citizenship and Immigration Services (USCIS) has altered its mission statement, removing the characterization of America as a “nation of immigrants” in order to emphasize the new goal of “securing the homeland”. Some critics made the point that most citizens are immigrants or their descendants, while others noted that most Americans believed that immigration should remain stable or increase. Yet the problem with the change in language lies deeper. According to our own legal tradition, Americans claim sovereignty over the territory of the US as immigrants, precisely because the territories in question were someone else’s homeland: the Native Americans’. Since our country exists, we don’t ask ourselves how or why. Portugal, Spain, France and England claimed territory by planting a flag, a symbolic action known as “discovery”. … we have a small favour to ask.

Tribal Fishing Rights Activist Billy Frank Jr. Statue to Be Placed in U.S. Capitol OLYMPIA, Wash. — When longtime tribal treaty rights warrior Billy Frank, Jr. died unexpectedly on May 6, 2014 at the age of 83, S’Klallman Tribal Chairman W. Ron Allen said, “He was bigger than life. It’s a very sad day for all of us.” Billy Frank Jr. History shows why school prayer is so divisive The education committee of the Kentucky Senate is currently considering a bill for a “day of prayer” in the state’s schools. The bill known as HB 40 was already passed by the Kentucky House of Representatives. As a scholar who has studied school prayer this bill raises the ghosts of history. As far back as the early 19th century, Catholic students and other religious groups were sometimes whipped, beaten and worse, for not participating in prayer and Bible reading in the common schools, a predecessor to the public schools.

Canada’s Supreme Court says Native American Richard Desautel has right to hunt in Canada The ruling in the case of Richard Desautel, a U.S. citizen and member of the Lakes tribe of the Colville Confederated Tribes in Washington state, ended a legal battle that began in 2010 when he shot a cow elk in the Arrow Lakes region of British Columbia. Story continues below advertisement He alerted a conservation officer and was charged with hunting without a license and hunting big game while not a resident of British Columbia. He intended his action to be a test case. Desautel argued that he was exercising his right under Section 35 of Canada’s Constitution Act, which recognizes and affirms rights afforded to “aboriginal peoples of Canada.” Supreme Court to Decide Town Prayer Case The Supreme Court has agreed to hear a case that strikes at the heart of one of the many culture wars in American society: the separation of church and state. The Justices will decide whether the Constitution allows a community in upstate New York to open its town board meetings with religious prayer. This case invokes the Establishment Clause of the First Amendment, which states that “Congress shall make no law respecting an establishment of religion.” Court decisions have extended this language to state and local governments. The Supreme Court has also said that this provision goes beyond the creation of a national religion.

Martin Luther King, Jr. Was More Radical Than You Think - by Ben Passmore On the 50th anniversary of his death, it’s time to remember who he really was by Ben Passmore Posted April 4th, 2018 Growing Native Sovereignty on Earth Day Details By Sebastian Africano & Dr. Valerie Small April 22, 2021 This Earth Day, tens of thousands of Ponderosa Pine, Douglas Fir, Plains Cottonwood, Coyote Willow, Chokecherry, Buffalo Berry, and Wild Plum grown at the Colorado State Forest Service Nursery in Fort Collins are ready to be picked up and delivered to Tribal communities across the Western U.S, growing not just trees, but a movement. For generations, Indigenous peoples have grown and tended trees to meet human needs - but the forests remaining on Native Lands are losing their capacity to do so.

This Day in Quotes: “No rights which the white man was bound to respect.” On March 6, 1857, the U.S. Supreme Court issued it’s controversial decision on Scott v. Sandford — generally referred to as “the Dred Scott case.” The plaintiff, Dred Scott, was a slave purchased from the Blow family of St. The Guardian view on Israel’s democracy: killing with impunity, lying without consequence? In the last nine months of 2018, according to the United Nations, Palestinians – many of them children – were killed at the rate of around one a day while taking part in protests along Israel’s perimeter fence with Gaza about their right to return to ancestral homes. They included medics and journalists. Most of the dead were unarmed and posed no danger to anyone, with little more than rocks in their hands and slogans on their lips.

‘Dear Georgina’ tells one of many stories about injustice to Indigenous children As a young girl growing up in foster homes in northern Maine, Georgina Sappier-Richardson often went hungry for lack of food, but picked potatoes before going to school – and then was forced to turn her paychecks over to her foster parents. When she spoke the wrong word, her foster parents washed her mouth with lye soap. When she got lice, they soaked her head in kerosene and set her by the stove, believing the heat from the stove would somehow kill the lice. And when someone from the state was scheduled to show up to see how things were going, she was threatened with a leather strap if she said anything about the “abnormalities” of her young life.

'Corporations Are People' Is Built on a 19th-Century Lie Somewhat unintuitively, American corporations today enjoy many of the same rights as American citizens. Both, for instance, are entitled to the freedom of speech and the freedom of religion. How exactly did corporations come to be understood as “people” bestowed with the most fundamental constitutional rights? The answer can be found in a bizarre—even farcical—series of lawsuits over 130 years ago involving a lawyer who lied to the Supreme Court, an ethically challenged justice, and one of the most powerful corporations of the day. That corporation was the Southern Pacific Railroad Company, owned by the robber baron Leland Stanford.

Republican lawmakers who backed Trump’s tax cuts now freak out over bipartisan spending deal The bipartisan congressional leadership and White House reached a two-year budget deal on Monday, seemingly averting another government shutdown and preventing a default on the national debt that has grown to an all-time high under President Donald Trump. But despite previously backing the 2017 tax cuts for the rich that have helped fuel the largest monthly budget deficits in American history, several self-styled deficit hawks in Congress are now signaling their opposition based on claims of fiscal conservationism. The deal — which Trump praised on Twitter as “a real compromise in order to give another big victory to our Great Military and Vets!” — will provide more than $1.3 trillion for agency spending for each of the next two years and suspend the nation’s debt limit until after the election.

A Native American Tribe Gave Missouri Its Name. Now Its Descendants Are Preserving A Fading Language For more stories like this one, subscribe to A People's History of Kansas City on Apple Podcasts, Spotify or Stitcher. Before English, French or any European language was spoken in the spot of the map where Missouri sits, Native American tribes brought their own dialects to the region. One of those dialects was Chiwere, a Siouan language originally spoken by the Otoe, Iowa and Missouria tribes. It's an endangered language that researchers and descendants of its speakers are working hard to preserve. The Missouria is the tribe behind the state of Missouri’s name.