5 Ways Writers Use Misleading Graphs To Manipulate You [INFOGRAPHIC] In this post-truth era, graphs are being used to skew data and spin narrative like never before. Especially with the velocity at which some of these topics spread across social media. All it takes is a single graph from a less-than-reputable source, blasted out to a list of followers, to spread a false narrative around the world. 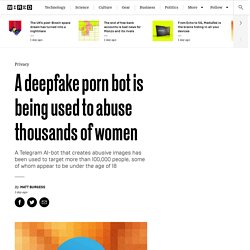 The bot is used by thousands of people every month who use it to create nude images of friends and family members, some of whom appear to be under the age of 18. Trusting video in a fake news world. These tools represent the latest weapons in the arsenal of fake news creators – ones far easier to use for the layman than those before. 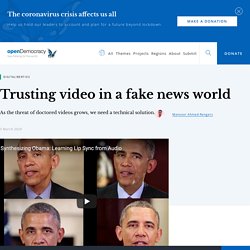 While the videos produced by these tools may not presently stand up to scrutiny by forensics experts, they are already good enough to fool a casual viewer and are only getting better. The end result is that creating a good-enough fake video is now a trivial matter. There are, of course, more traditional ways of creating fake videos as well. The White House was caught using the oldest trick in the book while trying to justify the barring of a reporter from the briefing room: they sped up the video to make it look like the reporter was physically rough with a staff member.

Other traditional ways are misleadingly editing videos to leave out critical context (as in the Planned Parenthood controversy), or splicing video clips to map wrong answers to questions, etc. Major platforms are acutely aware of the issues. 8 resources to detect fake news. According to News Co/Lab research, more than one-third of people surveyed could not identify a fake headline. 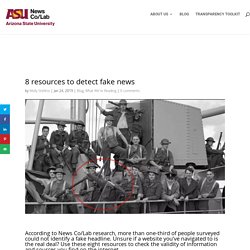 Unsure if a website you’ve navigated to is the real deal? Use these eight resources to check the validity of information and sources you find on the internet. BotometerWebsite Indiana University created Botometer (formerly “BotOrNot”) as a response to the prevalence of fake bots on Twitter. The site rates accounts on a scale of one to five — one being real and five being fake — based on its history, tweets and mentions. Detecting Fake NewsCode This code, available on GitHub, detects fake news by using machine learning and Bayesian models. FactCheck.orgWebsite Users can ask FactCheck.org questions about the validity of political claims and information, and the team behind the site will investigate and explain the truth fully. 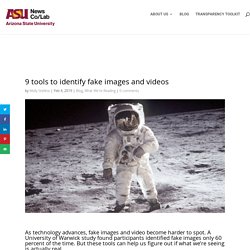 A University of Warwick study found participants identified fake images only 60 percent of the time. But these tools can help us figure out if what we’re seeing is actually real. FFmpeg Website This website allows users to record, convert and stream any kind of audio or video. Users can also resize video quickly using a polyphase filter or watch video in slow motion. FotoForensics Website This tool provides an in-depth analysis of images on the internet. Google Reverse Image Search Search engine With this tool, you can Google search an image, and the results will display similar images and websites that contain these images. InVID Verification Plugin Browser extension InVID is a plugin available on Chrome and Firefox. Serelay Serelay App Users can upload images to this free app and it will perform a series of tests to conclude whether or not the image is doctored. 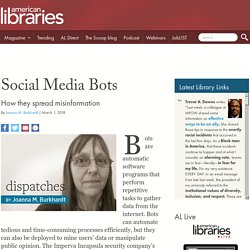 Bots can automate tedious and time-consuming processes efficiently, but they can also be deployed to mine users’ data or manipulate public opinion. The Imperva Incapsula security company’s Bot Traffic Report 2016 estimates that approximately 30% of internet traffic is produced by malicious bots. In social media, bots collect information that might be of interest to users by crawling the internet for specific information and sharing it on sites like Facebook and Twitter. OSoMe: Social Media Observatory.