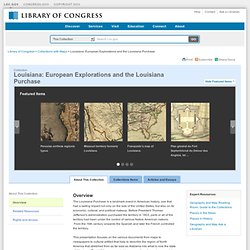 Political Cartoons. JFK. From Dred Scott to the Civil Rights Act of 1875: Eighteen Years of Change. In 1857, the U.S. 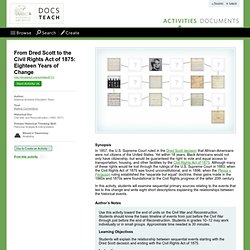 Supreme Court ruled in the Dred Scott decision that African-Americans were not citizens of the United States. Yet within 18 years, Black Americans would not only have citizenship, but would be guaranteed the right to vote and equal access to transportation, housing, and other facilities by the Civil Rights Act of 1875. Opportunity Nation - The Opportunity Index measures 16 key indicators to produce an overall opportunity score and grade for all 50 states, Washington DC & over 2,900 counties.

Select an indicator to see how your community fareson pre-school enrollment, affordable housing and more Overall OpportunityClick to Select A Different Indicator Virginia Beach city, VA National Average Virginia Average The overall index of the potential opportunity of a given state or county. 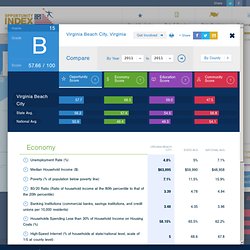 This combines all sixteen of the indicators for states, and fourteen for counties, considered into a score out of 100. Digital History. Constitution Day Teacher Resources. On September 17, 1787, the final draft of the Constitution was signed by 39 delegates. 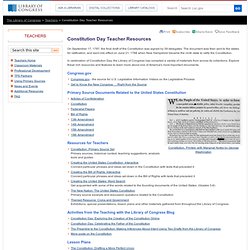 The document was then sent to the states for ratification, and went into effect on June 21, 1788 when New Hampshire became the ninth state to ratify the Constitution. In celebration of Constitution Day, the Library of Congress has compiled a variety of materials from across its collections. Explore these rich resources and features to learn more about one of America's most important documents. Congress.gov Primary Source Documents Related to the United States Constitution. Education - Learning About September 11th. Student News. Reference: Edward R. Murrow’s Audio Essays Have Been Digitized and Put Online. Create a map. 5 Great Mapping Tools to Use in the Classroom. Bill Moyers Journal . Immigration Timeline. Timeline: U.S. immigration policy - politics - Capitol Hill. United States History Classes » Blog Archive » The United States And Its Neighbors.

Unmasking Iconic Figures. Watching the new movie about Alfred Hitchcock — Hitchcock — I was struck by the difference between my iconic image of the man on the one hand, and the character who appeared on screen in this movie on the other hand.

Anthony Hopkins is impressive as Hitchcock and was a brilliant casting choice given his persona in movies like Silence of the Lambs. Image courtesy of Fighting-Wolf-Fist on Deviant Art When our students learn about important people in history as well as figures from their own times, we would expect them to scratch away at the superficial, iconic images easily at hand to learn more about the person behind the mask. Changing Research Rituals In many schools, research about important people usually requires little more than hunting and gathering, scooping and smushing. 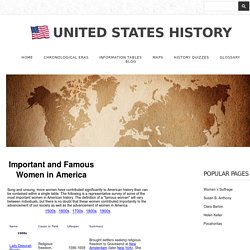 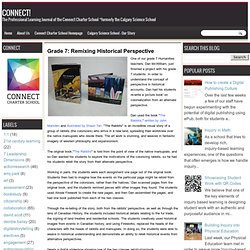 Hungry History — Food & Culinary History. War Stories: Historic Fiction Blogging - Thematic History. ﻿ War Stories: Historic Fiction Blogging﻿﻿﻿ Time to complete: 12 weeks Teacher Directions:Although the standard for ELA and History seem pretty straight forward, with the use of technology there is an opportunity to allow students to embrace what they are learning and put it in their own words using Historical Fiction accounts by way of blogs. 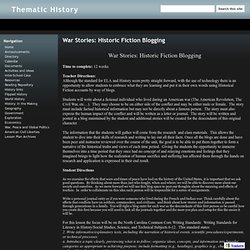 Students will write about a fictional individual who lived during an American war (The American Revolution, The Civil War, etc…). They may choose to be on either side of the conflict and may be either male or female. The story must include factual historical information but may not be directly about a famous person. Zeitgeist 2012 – Google. 2012 was a year of big moments, from global games to historical elections and everything in between. 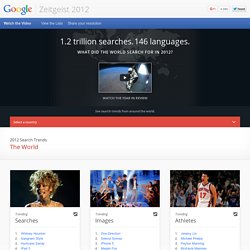 With this site, we've analyzed over one trillion queries to showcase what the world searched for. How We Did This We studied an aggregation of over one trillion searches (or queries) that people typed into Google Search this year. We used data from multiple sources, including Google Trends and internal data tools. Write a Rap About the News of 2012. The Year in Rap: 2011 from Flocabulary Update: Winners have been declared! 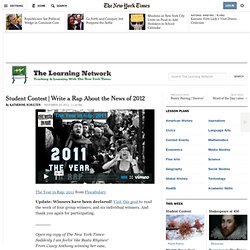 Visit this post to read the work of four group winners, and six individual winners. And thank you again for participating. Open my copy of The New York Times- Suddenly I am feelin’ like Busta Rhymes! From Casey Anthony winning her case, to Charlie Sheen and his fall from grace. — The first four lines of one of the winning raps from our 2011 “Year in Rap” contest. Though this blog has only been around for a little over three years now, we’ve already developed some traditions, and one of our favorites is our December celebration of the year in news.

Social Studies Resources - The Common Core Conversation. The Living Room Candidate. United States History from 1865 to Present. HistoryBuff.com. Westward Expansion. Education - Social Studies. Zinn Education Project. Op-Chart - Picturing the Past 10 Years - Graphic. France in the year 2000. In this section of the site we bring you curated collections of images, books, audio and film, shining a light on curiosities and wonders from a wide range of online archives. Curriculum. The Reading Like a Historian curriculum engages students in historical inquiry. Each lesson revolves around a central historical question and features sets of primary documents modified for groups of students with diverse reading skills and abilities. This curriculum teaches students how to investigate historical questions employing reading strategies such as sourcing, contextualizing, corroborating, and close reading.

1607-1776. Civil War. Maps. Civil Rights. 1920s-1930s. Civics. World War 1. Cold War. Revolutionary War. Ocean Crossings, 1870-1969: Comfort, Courtesy, Safety, Speed. Beginning in the 1920s, shipowners tried to sell all passengers on the pleasures of the journey. A few wealthy travelers—and immigrants by the millions—filled ocean liners in the late 1800s and early 1900s. At the time, steamship lines did not try to attract the potential travelers in between. But in the 1920s, changing immigration laws halted the flow of immigrants and eroded the shipping lines’ profits. Then they began to market their ships as delightful ocean-going experiences for nearly everyone—smart, modern, safe, affordable, and fun. Speed and Luxury For wealthy Americans, travel in Europe was a mark of status.