Why Conservatives Adopted a Pro-Choice Slogan. Of course, many American women will soon be faced with an infinitely more invasive form of biopolitical control, courtesy of First Things’ allies. 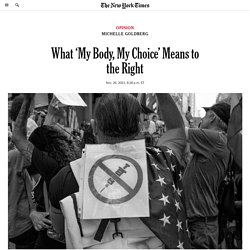 On Wednesday, the Supreme Court will hear oral arguments in Dobbs v. Jackson Women’s Health Organization, a case dealing with Mississippi’s ban on abortions after 15 weeks. It’s possible that the justices could gut Roe without overturning it outright, but after they let Texas’ abortion bounty law stand, at least for the time being, I’m expecting the worst. How a Tiny Bit of Gender Bias Adds Up to Hurt Women’s Careers. When the computer scientist and mathematician Lenore Blum announced her resignation from Carnegie Mellon University in 2018, the community was jolted. 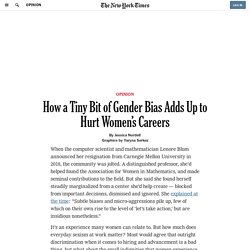 A distinguished professor, she'd helped found the Association for Women in Mathematics, and made seminal contributions to the field. But she said she found herself steadily marginalized from a center she’d help create — blocked from important decisions, dismissed and ignored. Breaking the homogeneity of 'Asian': Report on inequities among students. FOLLOW Voices on Apple Podcasts, Spotify, iHeart Radio or wherever you listen to your podcasts. 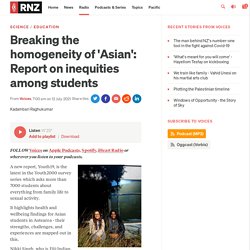 Nikki Singh (R) and Lovely Dizon (L) on their involvement in the Youth19 report on East and South Asian students in Aotearoa Photo: RNZ/Kadambari Gladding A new report, Youth19, is the latest in the Youth2000 survey series which asks more than 7000 students about everything from family life to sexual activity. It highlights health and wellbeing findings for Asian students in Aotearoa - their strengths, challenges, and experiences are mapped out in this. Nikki Singh, who is Fiji-Indian, and Lovely Dizon, Filipina, both in their early 20s, were involved in the research and co-authored parts of this report.

In many ways, their experience of growing up in New Zealand is echoed in the report findings - from lack of safe spaces, to "achievement pressure", poverty, mental health, and discrimination. Xtra Mail Inbox. Why educating girls is even more important than people realise. THE LAST time the Taliban ruled Afghanistan, they banned girls from going to school. 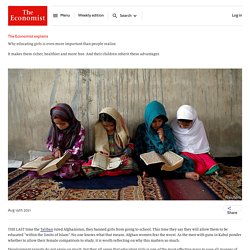 This time they say they will allow them to be educated “within the limits of Islam”. No one knows what that means. Afghan women fear the worst. As the men with guns in Kabul ponder whether to allow their female compatriots to study, it is worth reflecting on why this matters so much. The Economist Today. Seven Ways to Fight Bias in Your Everyday Life. When Tamir Rice, a young boy not much older than my own children, was shot by police and killed while playing with a toy gun, I finally felt like I had to get involved in the Black Lives Matter movement. 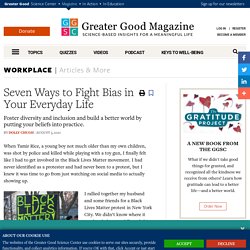 I had never identified as a protester and had never been to a protest, but I knew it was time to go from just watching on social media to actually showing up. I rallied together my husband and some friends for a Black Lives Matter protest in New York City. We didn’t know where it was headed, so we followed this incredibly well-organized group of 100 young people and ended up at the Toys”R”Us that used to be in Times Square, a huge flagship store full of tourists. How to End ‘Women’s Work’ and its Pay Gap.

The political and legal campaign for equal pay had preceded the pay equity movement. 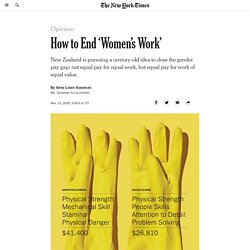 Pushed by the college-educated women who dominated mainstream feminist groups, and who sought to work alongside men in corporations, universities, and law firms, the equal pay movement was initially less attentive to the concerns of low-wage workers in pink-collar jobs, argues Michael McCann, a University of Washington professor who wrote a 1994 book on pay equity. But after the judicial rulings of the 1980s undercut the comparable worth legal framework, equal pay became the dominant standard for addressing the gender gap in the United States Then, in 2012, Kristine Bartlett, a caregiver who had worked for more than 20 years in an old age home making barely above minimum wage, filed a claim with the Employment Relations Authority against her employer, TerraNova Homes and Care. The claimants asked the court to take a pay equity approach instead and to look more closely at the actual nature of the work.

NZ - Maori. America's 'untouchables': the silent power of the caste system. In the winter of 1959, after leading the Montgomery bus boycott that arose from the arrest of Rosa Parks and before the trials and triumphs to come, Martin Luther King Jr and his wife, Coretta, landed in India, in the city then known as Bombay, to visit the land of Mahatma Gandhi, the father of nonviolent protest. 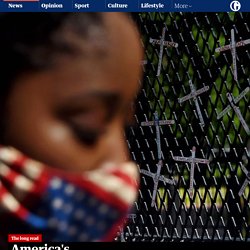 They were covered in garlands upon arrival, and King told reporters: “To other countries, I may go as a tourist, but to India I come as a pilgrim.” He had long dreamed of going to India, and they stayed an entire month. King wanted to see for himself the place whose fight for freedom from British rule had inspired his fight for justice in America. He wanted to see the so-called “untouchables”, the lowest caste in the ancient Indian caste system, whom he had read about and had sympathy for, but who had still been left behind after India gained its independence the decade before.

King was floored. Letter from a Region in My Mind, by James Baldwin. I was frightened, because I had, in effect, been summoned into a royal presence. 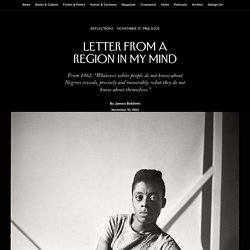 I was frightened for another reason, too. I knew the tension in me between love and power, between pain and rage, and the curious, the grinding way I remained extended between these poles—perpetually attempting to choose the better rather than the worse. But this choice was a choice in terms of a personal, a private better (I was, after all, a writer); what was its relevance in terms of a social worse? Raoul Peck: What James Baldwin Knew About This Moment. It took me 10 years to make this film, but Baldwin put his whole life and body weight into these words, which, today more than ever, reverberate like a never-ending nightmare.

“There are days—this is one of them—when you wonder what your role is in this country and what your future is in it. How, precisely, are you going to reconcile yourself to your situation here and how you are going to communicate to the vast, heedless, unthinking, cruel white majority that you are here. I’m terrified at the moral apathy, the death of the heart, which is happening in my country. These people have deluded themselves for so long that they really don’t think I’m human. And I base this on their conduct, not on what they say. And this means that they have become in themselves moral monsters.” – barbaragrieve

With them, Baldwin dissected a story whose roots are deep. 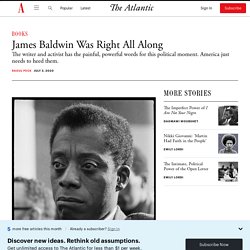 He exposed the underlying causes of violence in this country, and he would have continued to do so, year after year, one uprising after another, were he still alive today. And we still don’t get it. Read: The famous Baldwin-Buckley debate still matters today. Women's Forum for the Economy & Society. G7 Women's Forum Call for Inclusive Recovery. e8140e26 30a0 48e3 8ca3 addaea1d0d5a.