"What we have begun we shall finish." ~ Life entails death. ~

A different way to die: The story of a natural burial. Tristan knew the end was near when his dad turned yellow. 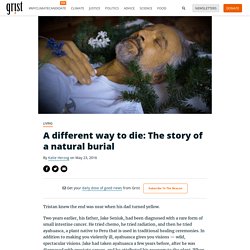 Two years earlier, his father, Jake Seniuk, had been diagnosed with a rare form of small intestine cancer. He tried chemo, he tried radiation, and then he tried ayahuasca, a plant native to Peru that is used in traditional healing ceremonies. In addition to making you violently ill, ayahuasca gives you visions — wild, spectacular visions. Jake had taken ayahuasca a few years before, after he was diagnosed with prostate cancer, and he attributed his recovery to the plant. When he was diagnosed for the second time, he turned to it again. Treating cancer with ayahuasca made sense for Jake. In January of 2016, Jake went to Hawaii to do five ayahuasca treatments over two weeks. The American way of death Around half of Americans are buried after they die. This takes a lot of resources. Cremation, while less resource intensive, isn’t ideal either. Choosing a greener way to die Jake decided on something different: a natural burial. Dying is Absolutely Safe - Awareness Beyond Death – Ram Dass 2019.

There is a tombstone in Ashby, Massachusetts that reads, “Remember friend, as you pass by, as you are now, so once was I. 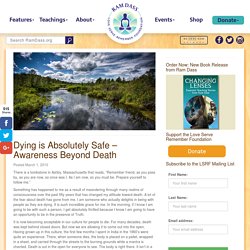 As I am now, so you must be. Prepare yourself to follow me.” Something has happened to me as a result of meandering through many realms of consciousness over the past fifty years that has changed my attitude toward death. A lot of the fear about death has gone from me. I am someone who actually delights in being with people as they are dying.

It is now becoming acceptable in our culture for people to die. I was certainly one of the people in this culture who hid from death. Prior to my first experience with psychedelics, I had identified with that which dies – the ego. The interesting thing to me at the time was that my first experience with psychedelics was absolutely indescribable. The Tibetan Book of the Dead was used by Tibetan Buddhist lamas to read to fellow lamas as they were dying, and for forty-nine days after their death. Practical help for miscarriage from an Orthodox Christian perspective. DIY Death: Natural, At-Home Funerals And Their Boomer Appeal. WELLFLEET, Mass. -- When 20-month-old Adelaida Kay Van Meter died of a rare genetic disease last winter, her father, Murro, gently carried her body out of the house to his wood shop in the pines near Gull Pond. 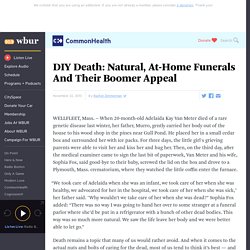 He placed her in a small cedar box and surrounded her with ice packs. For three days, the little girl's grieving parents were able to visit her and kiss her and hug her. Then, on the third day, after the medical examiner came to sign the last bit of paperwork, Van Meter and his wife, Sophia Fox, said good-bye to their baby, screwed the lid on the box and drove to a Plymouth, Mass. crematorium, where they watched the little coffin enter the furnace. “On Friday, a family took charge of their mother’s... What is a Home Funeral? Reclaiming the Lost Art of Caring for the Dead and Having a Funeral at Home - SevenPonds BlogSevenPonds Blog. SevenPonds is proud to introduce our readers to an amazing conference on home funerals and green burial The home funeral has proven to be a re-emerging trend, as more and more people are making moves to reclaim the lost art of dying at home.The home funeral offers an alternative to the act of transporting a loved one who has passed to a potentially impersonal funeral establishment; rather a home funeral encourages family and friends to care for the loved one in the comfort and intimacy of their own home. 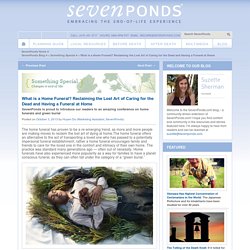 Deathxpert Opinion: Organ Donation and Home Funerals. I really want a home funeral and natural burial, but I also want to donate my organs. 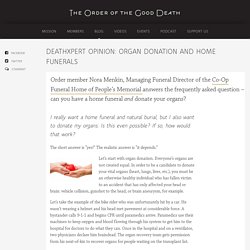 Is this even possible? If so, how would that work? The short answer is “yes!” The realistic answer is “it depends.” Dust to Dust. Lean and Green Frugal Living: A green funeral? I know funerals are not a particularly happy topic and most people don't like discussing their "final arrangements" but I came across this article on a message board and was intrigued. 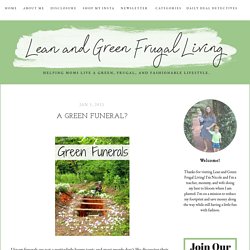 The article discusses the concept of "green funerals. " I have never liked the idea of being pumped full of chemicals and put in an air tight box for all eternity. Cremation is not an option because of my religious beliefs. If i die.org. Conscious Dying and Home Funeral Services. The sacred task of caring for the dead should be a normal part of life. In Cantonese village culture, there is a group of corpse handlers called the ng jong lo. 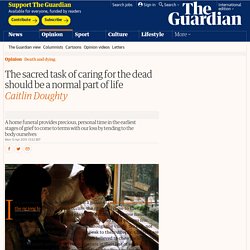 When a death occurs, the ng jong lo come to the family home to wash the corpse and place it in a coffin. The corpse handlers are “living ghosts,”, dirty, unclean – a group who other citizens fear. Doors and windows close when they walk through the village. No one, not even priests, will hand them anything or speak to them directly. Children are kept away from the corpse handlers, who are believed to chew garlic to hide the stench of death and take perverse pleasure in their line of work. In my years of working with the dead in the US, no one (to my knowledge) has hidden their children as I walk past. Though we despise the undertaker, we know why we need them. While these reasons may seem obvious, they are simply not true.