Inside the Lincoln Project’s Secrets, Side Deals and Scandals. Mr. 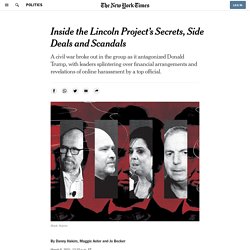 Trump’s outburst gave the Lincoln Project a flood of attention it could have only hoped for. Fund-raising surged. In June, the billionaire investor Stephen Mandel donated $1 million, while Joshua Bekenstein, a co-chairman of Bain Capital, and David Geffen each donated $100,000; Mr. Geffen has since given $500,000 in total. (David Dishman, the executive director of the David Geffen Foundation, said that Mr.

The Complete List of Trump’s Twitter Insults (2015-2021) Ireland’s shock poll result was a vote against the success of globalisation. American Carnage by Tim Alberta review – the ‘riddle’ of Trump’s rise. Like trauma victims replaying the calamity that befell them while they wonder how much they are to blame, Americans have spent almost three years asking themselves the anguished question that Tim Alberta poses in the stark first sentence of his book: “How did Donald Trump become president of the United States?” 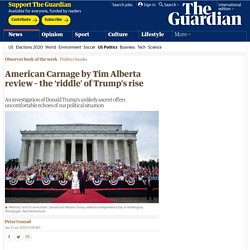 Answering this “riddle”, as Alberta calls it, is like rationalising the fall of man or coming to terms with a cancer diagnosis. Along with WikiLeaks and the KGB, higher powers seem to have been in play. Former White House press secretary Sarah Sanders recently suggested that Trump was God’s personal choice to occupy the Oval Office. Let’s continue to resist Brexit. Our economy and values are at stake.

Three years ago, 48% of us voted Remain. 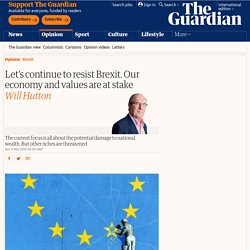 If another vote were taken in the near future, the figure would probably top 50%. But perish the current leading politician or businessperson who makes the case for ongoing membership of this remarkable international organisation on our doorstep. Apart from a few outliers, it is taken as a political given that Britain must leave the EU; the divisive question is in what form. For although the focus is largely on the undoubted deleterious economic impact – the worse the harder the Brexit – the bigger question is what country do we want to be. The EU has rightly become the talismanic issue of our times.

For if you support EU membership, you will tend to own a cluster of other values and principles. Revealed: populist leaders linked to reduced inequality. Populist presidents and prime ministers are associated with significant reductions in economic inequality across the world, according to groundbreaking research that will challenge the assumption that populism only has negative consequences. 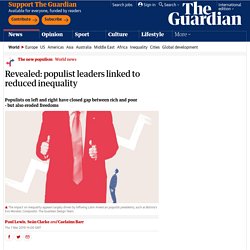 However, the research by political scientists and economists also found that governments run by populist leaders are correlated with declines in the quality of elections, a loosening of constraints on executive power, and a sometimes dramatic fall in press freedom. The Teleprompter Test: why Trump's populism is often scripted.

New research into Donald Trump’s speeches reveal why the president’s scripted brand of populism doesn’t come easy Donald Trump spent much of his presidential campaign mocking his rivals for relying on teleprompters – until, reluctantly, he was forced to do the same. 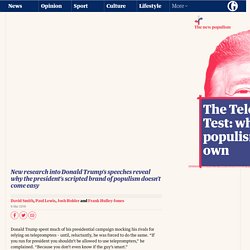 Brexit: Facts vs Fear, with Stephen Fry. Society is breaking down. Every day a new horror arises and I’m terrified. How many things is it possible to be scared of at the same time? 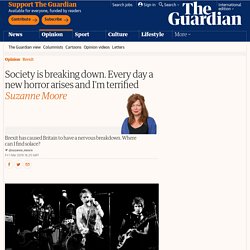 I am asking for a friend. Actually for all my friends. Indeed, everyone I ever met. Every day a new horror arises. Sunbathing in February? I used to watch a lot of horror films. Pessimism, however, is not an option. My generation does it unthinkingly. Trump portrait: you couldn’t create a creepier Yuletide scene if you tried. The absence of intimacy in the Trumps’ official Christmas portrait freezes the heart. 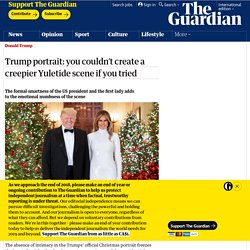 Can it be that hard to create a cosy image of the presidential couple, perhaps in front of a roaring hearth, maybe in seasonal knitwear? Brussels protest against UN migration pact turns violent. 'Their ideas had no place here': how Crete kicked out Golden Dawn. Washing hangs from the balconies of an unassuming apartment block on Irodotou street in Heraklion, the capital of Crete. 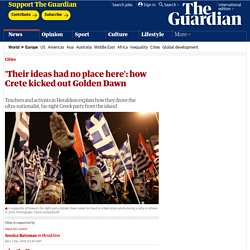 Outside, children ride bikes and old men play cards in a coffee shop. But before May this year, this building looked rather different. A sign hung outside reading: “Golden Dawn, Heraklion region”. The ultra-nationalist, far-right Greek party used this street as its local base. It was local teachers who first spotted its influence. Brace yourself, Britain. Brexit is about to teach you what a crisis actually is. Most British people don’t have the first inkling of what a crisis is. 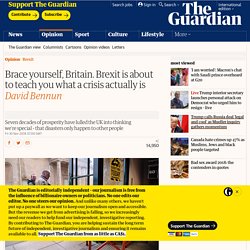 They think it’s a political thing. “Government in crisis”, and so on. John B. Judis: The Populist Explosion. Staus quo is failing. Hillary Clinton: Europe must curb immigration to stop rightwing populists. Europe must get a handle on immigration to combat a growing threat from rightwing populists, Hillary Clinton has said, calling on the continent’s leaders to send out a stronger signal showing they are “not going to be able to continue provide refuge and support”. 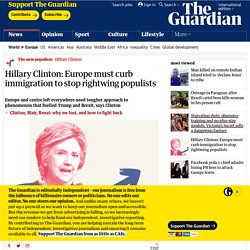 In an interview with the Guardian, the former Democratic presidential candidate praised the generosity shown by the German chancellor, Angela Merkel, but suggested immigration was inflaming voters and contributed to the election of Donald Trump and Britain’s vote to leave the EU. National populism is unstoppable – and the left still doesn’t understand why. For a number of years Europe has been in the midst of a significant challenge from national populism, as a succession of recent elections have shown in Italy, Austria, Hungary and Sweden. Yet this is a movement that remains poorly understood. Parties on the radical left and Greens are also making gains in some countries, but they are having nothing like the electoral or policy impact of the far right. It has emerged in democracies that were always thought to be immune to this political force.