Carrot-Ginger Smoothie Recipe on Food52. I like to say I'm a lazy iron chef (I just cook with what I have around), renegade nutritionist, food policy wonk, and inveterate butter and cream enthusiast! 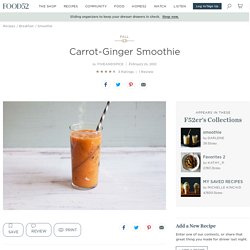 My husband and I own a craft distillery in Northern Minnesota called Vikre Distillery (www.vikredistillery.com), where I claimed the title, "arbiter of taste. " I also have a doctorate in food policy, for which I studied the changes in diet and health of new immigrants after they come to the United States. I myself am a Norwegian-American dual citizen. So I have a lot of Scandinavian pride, which especially shines through in my cooking on special holidays. Beyond loving all facets of food, I'm a Renaissance woman (translation: bad at focusing), dabbling in a variety of artistic and scientific endeavors. Pitaya (Dragon Fruit) Bowl. Liver-Supportive Beet + Cherry Smoothie. We love a recipe that packs both a nutritional punch and lots of good flavor. 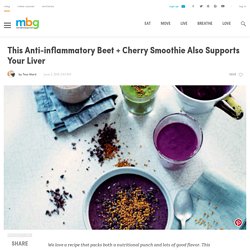 This smoothie has beets to help support your liver along with anti-inflammatory ginger, cherries, and cacao. This dark purple, cacao-laced smoothie has a pleasing combination of earthy, rich, and zesty ingredients. It is filled with inflammation-fighting ginger and beet to give your body the vitamins and minerals it needs to reboot and refuel. Beet + Cherry Smoothie Serves 2 Ingredients. Coconut Ginger Smoothie. I can’t tell you how many times that I have made this smoothie in the past couple of weeks. 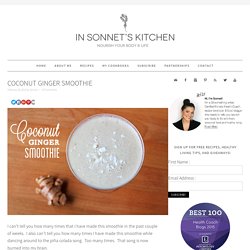 I also can’t tell you how many times I have made this smoothie while dancing around to the piña colada song. Too many times. That song is now burned into my brain. Consider this the after-work or weekend drink for those that don’t drink cocktails. This smoothie is like a healthy piña colada without the heavy coconut cream or pinapple. 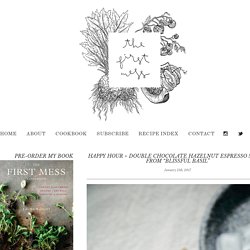 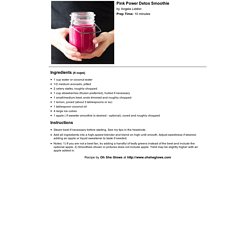 See my tips in the headnote.Add all ingredients into a high-speed blender and blend on high until smooth. Healthy Green Kitchen Blood Orange, Papaya, and Dark Cherry Smoothie » Healthy Green Kitchen. We went to the Dominican Republic back in December and boy am I missing it right now. 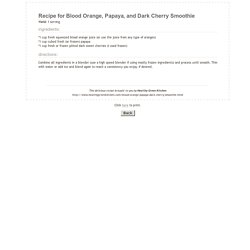 The beach was so, so beautiful and the weather was perfect. And the fruit! The mangoes, papayas, etc. were really delicious. Chocolate Frosty Smoothie. One of my favorite treats growing up was a chocolate Wendy’s frosty. 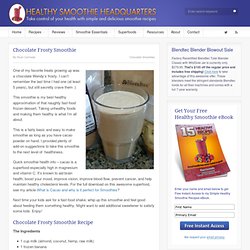 I can’t remember the last time I had one (at least 5 years), but still secretly crave them :) This smoothie is my best healthy approximation of that naughty fast-food frozen dessert. Taking unhealthy foods and making them healthy is what I’m all about. This is a fairly basic and easy to make smoothie as long as you have cacao powder on hand. Coffee Smoothie. This delicious and nutritious smoothie recipe was concocted for all the coffee and smoothie lovers out there. 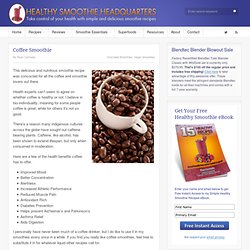 Health experts can’t seem to agree on whether coffee is healthy or not. I believe in bio-individuality, meaning for some people coffee is great, while for others it’s not so good. There’s a reason many indigenous cultures across the globe have sought out caffeine bearing plants. Caffeine, like alcohol, has been shown to extend lifespan, but only when consumed in moderation. Here are a few of the health benefits coffee has to offer. Green Breakfast Bowl. I had planned to start the year with a post about cleansing. 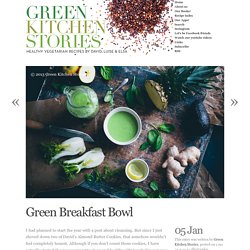 But since I just shoved down two of David’s Almond Butter Cookies, that somehow wouldn’t feel completely honest. Although if you don’t count those cookies, I have actually started the new year pretty clean and healthy. MJF Kitchen: Spring Fever Smoothie. Pumpkin Pie Smoothie. Eating seasonally is not only healthy, but tasty. 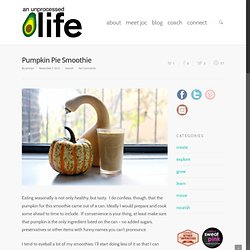 I do confess, though, that the pumpkin for this smoothie came out of a can. Ideally I would prepare and cook some ahead to time to include. If convenience is your thing, at least make sure that pumpkin is the only ingredient listed on the can – no added sugars, preservatives or other items with funny names you can’t pronounce. I tend to eyeball a lot of my smoothies. I’ll start doing less of it so that I can guide you guys along but I encourage everyone to experiment sometimes (except with baking, which is a science not to be messed with lightly unless you are prepared to ruin things a couple times).

Persimmon and Tangerine Smoothie with Vanilla, Ginger and Turmeric. Citrus fruits always remind of edible sunshine, and Satsuma mandarins are among my favorites. They're easy to peel, and their flavor straddles the line between sweet and tart. I think it awfully nice of them to come into season during the darkest days of the year. Their season coincides with the last of the persimmons. These mild, low-acid fruits pair well with the sharper flavor of citrus, and also with warming spices. SuperFood Green Smoothies. The Navitas Naturals giveaway is proving to be incredibly popular. I will email the first winner tomorrow, and then announce on facebook and twitter.

So, please check your emails and don't miss out on your chance to win 1 of 4 $200 gift cards to purchase whatever you like, as well as a copy of SUPERFOOD SMOOTHIES. I am really excited to share another blendsational recipe from this incredble new book, which I can only describe as a triumph. You can read my full rave about Julie and the book here, but the lowdown is that this is the best whole foods smoothie book I have ever read. Smoothies are such pleasurable fun foods, and Julie manages to make them delicious and feel like a treat, but also load them up with a ton of nutritional density, making these recipes an invaluable addition to any diet.

Back On Track Green Monster (Banana-Free) Aside from my current career in the food business, many of you may not know that I also moonlight as a Barber. The job is not to be taken lightly as it requires a fine attention to detail and precision, something I have no place in assuming much skill. However, I’ve had some practice in this area with recipe development and I figure it’s always wise to develop a new skill set for the resume. Every month, Eric calls me into the bathroom where I find him stripped down to his boxers with his Deluxe hair trimming set splayed about, clutching the large electric trimmer in one hand. The Green Smoothie That Made the News. The Democratic National Convention is over and my mind is really spinning. The amount of information I’ve learned and discovered about our leaders in Washington and what they think regarding our food policy here in America is mind blowing. Until I get all my thoughts, notes, etc. organized, I want to share the special shake recipe I made for WCNC – NBC News Channel 6 last week when they came to my home for breakfast to interview me about being an elected North Carolina delegate to the DNC.

It’s a new version of the infamous Hari Shake (Hari, my last name, means green in Hindi) and it’s by far my favorite these days. This recipe tastes like a sweet tart (you know, the candy from Willy Wonka) that I haven’t had in years. To my surprise both the camera man and reporter Ann Sheridan drank their entire shake. Come inside my kitchen, watch the video and read the whole story here: WCNC NBC News Channel 6: Food Blogger and DNC Delegate Hopes to Get Obama’s Attention (August 29, 2012) Meghan Telpner Nutritionista. 35 Flares Twitter 0 Facebook 23 Pin It Share 12 12 Google+ 0 StumbleUpon 0 35 Flares × Cashew Lime Green Smoothie. Simple smoothie recipes: 7 seasonal blends for the holiday. Iron Woman Gingerbread Smoothie. Before I became a vegan, I never really put much thought into getting the proper amount of vitamins and minerals.

When I was struggling with an eating disorder, I would restrict my calories to an unhealthy level, exercise intensely 7 days a week, and eat mostly processed ‘fat-free’ foods. When my body couldn’t take the starvation any longer, I binged on sugary processed junk food, often consuming 2,000-2,500 calories in a single sitting. Round and round the emotional rollercoaster went for years. High waisted hangover smoothie. My friend Jess is a rockstar.

Like, for real. I met her about 6 years ago when we were both living in Washington, D.C. At the time, she was with her band Lightfoot and we became friends over the bunch of times I got to photographer her playing. My Gourmet Smoothies on Pinterest. Summer Smoothie Recipes. 11 Brain-Boosting Smoothies. Best Strategy For Quitting Coffee. 36 Flares Twitter 11 Facebook 19 Pin It Share 4 4 Google+ 2 StumbleUpon 0 36 Flares × I love it when my family members come by the kitchen to share their wisdom with us, and this time is no different as my mom (yes, yes — we look alike) shares her awesome secret to quitting coffee. Everybody's Doing The Luca-Motion Ice Cream - Making Love in the Kitchen. 1 Flares Twitter 0 Facebook 0 Pin It Share 1 1 Google+ 0 StumbleUpon 0 1 Flares × We’re Raw Food Powering this Saturday And Meal Prep Made Easying on Sunday.