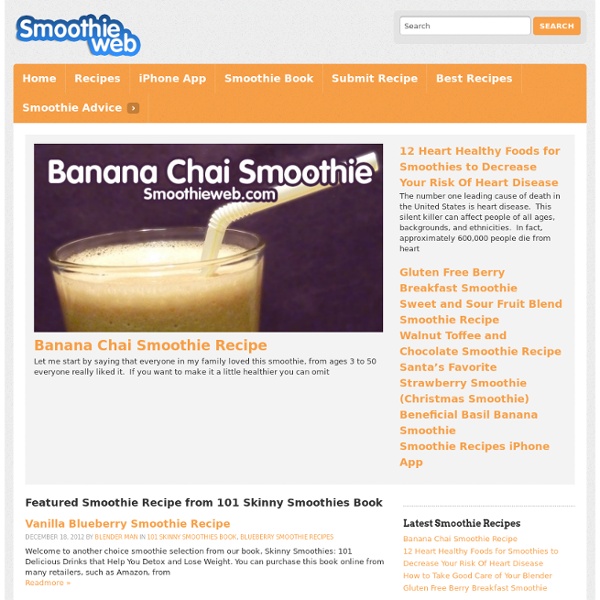 Raisin Cranberry Tea Biscuits I don't normally put raisins in baked goods, but I recently had a request for some raisin tea biscuits, so I decided to experiment. These turned out light and flaky and the addition of dried cranberries added a nice natural sweetness. If you are a savory person like me, I would even suggest you only add a tablespoon of sugar instead of two. If you don't have dried cranberries on hand, just add a few more raisins.

Flu-Buster Clementine Creamsicle Smoothie I’ve been playing nurse for the past few days, doing my best to help Eric beat his flu (and not catch it myself!). We’ve been eating lots of healthy dinner leftovers like Spicy Rainbow Rice & Bean Salad, Ultimate Vegan Lentil Walnut Loaf, Creamy Tomato Barley Risotto, and Back on Track Wheat Berry and Bean Salad, sure to give any cold a run for its money. I also decided to pull out my Winter Flu-Buster Secret Weapon this week… Ah Clementine’s, the perfect winter fruit to ward off a cold, don’t you think? Eric and I have been eating these juicy little delights non-stop, but when he started to feel like he was getting a fever, all he wanted was something COLD to soothe his throat and help his body cool down.

Good, Holy Heck Portabella Burgers People. I know you’re busy. I know you’ve got things to do and people relying on you. Hogwash. There is nothing more important than you grabbing your keys, hightailing it to the grocers, and buying everything you need to make these burgers stat. Yes, I said STAT. pineapple ginger smoothie Pineapple Ginger Smoothie Many of you longtime followers know that I’m not a big believe in “recipes” when it comes to smoothies. My method of choice is always “a little of this, a little of that”, usually based on whatever fresh produce happens to be hanging around my house. But a smoothie I made this week happened to be exceptionally tasty. So I decided to snap a quick pic and share it with you all. Vegetarian Cold Sesame Noodles March 11, 2014 Cold Sesame Noodles Serves 2 to 3 Adapted from Saveur Ingredients: ½ lb whole wheat spaghetti, cooked al dente, according to package directions (soba noodles also work, but I find they have a slightly bitter after-taste that’s distracting) – $2.19 4 Tablespoons sesame oil, divided – stock 2 Tablespoons low-sodium soy sauce – stock 1 […] Read the full article →

Roy G. Biv Smoothies I’ve had a few requests over the last few weeks for some smoothie recipes because I let it slip that Betsy and I generally just have a big smoothie for breakfast everyday. Turns out our daily smoothie recipe is a mix between yellow, red, and indigo, but that’ll make more sense to you later. Smoothies can be so varied I really struggled for awhile on how to present a wide spectrum of recipes in one post. That was, of course, until I saw a guy riding a bike last weekend with a rainbow sticker on his backpack. When I saw the rainbow I thought, now those would be some awesome smoothies!