Mushroom Building Bricks That Are Stronger than Concrete 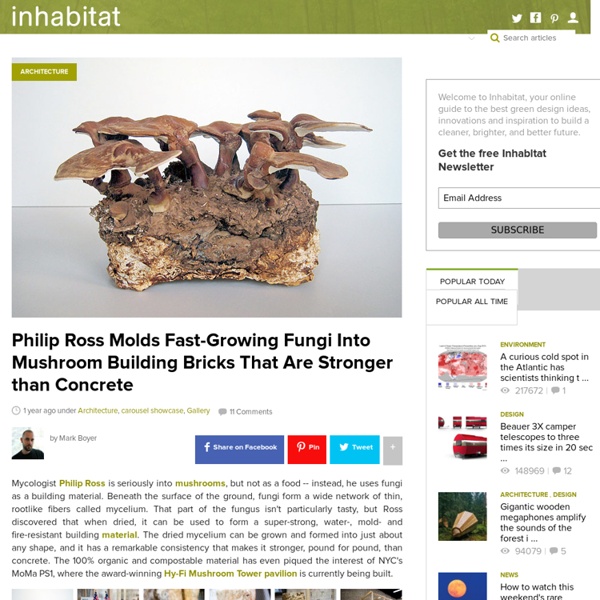 Mycologist Philip Ross is seriously into mushrooms, but not as a food -- instead, he uses fungi as a building material. Beneath the surface of the ground, fungi form a wide network of thin, rootlike fibers called mycelium. That part of the fungus isn't particularly tasty, but Ross discovered that when dried, it can be used to form a super-strong, water-, mold- and fire-resistant building material. We first discovered Ross’ unique mycelium material at The Workshop Residence in San Francisco’s Dogpatch neighborhood during the 2012 AIA SF‘s month-long Architecture and the City festival. The lab was still under construction when we visited, but some of Ross’ completed works were on display. Related: 3D-Printed Mycelium Chair Sprouts Living Mushrooms! “It has the potential to be a substitute for many petroleum-based plastics. + Philip Ross + The Workshop Residence Related:  New Materials

Better Batteries Through Mushroom Technology Mushrooms never cease to amaze. They’re one of the weirdest organisms on the planet, and we keep coming up with unexpected uses for them. Actually, some people think mushrooms aren’t from this planet at all. Now comes word that researchers at Researchers at the University of California, Riverside Bourns College of Engineering have found yet another use for mushrooms — in batteries. Magic Mushrooms In My Yard: Photos The UC research team has developed a new kind of lithium-ion battery anode using portobello mushrooms, which could eventually replace the industry standard of synthetic graphite. The development could have a fairly big impact in multiple industries, actually. Synthetic graphite, on the other hand, has a relatively high manufacturing cost due to specific preparation and purification processes that can also be harmful to the environment, according to the research team. Some Mushrooms Glow, And Here’s Why Mushrooms are also, as a rule, more tasty than graphite.

Matsutake culture medium for clay seed pellets - Masanobu Fukuoka Bamboo Composites Bamboo Composites Steel is heavy, environmentally unfriendly and corrodes. Actually 70% of today's structural damage is due to corrosion of steel within reinforced concrete buildings. Steel is also not widely available in many developing countries. Enter the super-fast-growing grass - bamboo - renewable, carbon sequestering, lightweight, corrosion-free, stress-resistant and less expensive than steel. Bamboo grows with abandon throughout tropical and temperate zones. Concrete reinforced with bamboo composite rods. Dirk Hebel of Advanced Fibre Composite Laboratory at FCL in Singapore and Assistent Professor at the Swiss Federal Institute of Technology, Zurich believes bamboo could replace steel in the not too distant future. The team is currently also testing the strength of concrete with bamboo composite mixed directly into the concrete. Resources: hebel.arch.ethz.ch sourceable.net

Plastic-Eating Mushroom Discovered in the Amazon Rainforest — A Solution for Our Trash Saturated World? By Carolanne Wright Contributing Writer for Wake Up World In a world addicted to plastic, it’s hard to imagine life without it. The problem is, plastic doesn’t breakdown safely and has proven itself to be exceedingly toxic for the planet and its inhabitants. Choking to Death on a Modern ‘Wonder’ Material Plastic is a relatively new material, developed in the last seventy years or so. “During World War II, raw materials were in short supply and we needed a resilient, economical and easily manufactured substitute. Jump to the present day. Plastic Plates and Cups: 780,000 tons were produced, and all 780,000 tons were discarded.Plastic Bags, Sacks and Wraps: 3,960,000 tons were produced. 9.8% was recovered (390,000). 3,570,000 tons were discarded.Plastic Trash Bags: 930,000 tons were produced, and all 930,000 were discarded. The material is made to endure — which it does, for hundreds of years. A Healthy Appetite for Polyurethane Additional Methods for Taming the Plastic Beast Article sources

All-black house in Poland is clad in sustainably harvested durable ThermoWood | Inhabitat - Green Design, Innovation, Architecture, Green Building Here at Inhabitat, we're all about new advancements when it comes to design. That's why we are so excited about an interesting technology coming from Scandinavia called ThermoWood, a sustainably harvested, extremely durable type of timber manufactured in Finland. Design studio też architekci chose ThermoWood as cladding material for their new residential project in Poland, prompting Treehugger's Lloyd Alter to take a closer look at the product, which combines benefits of both hardwoods and softwoods and offers an interesting alternative to the often hazardous chemically treated wood. We’ve seen some great new developments in the field of sustainable cladding materials, like low maintenance softwood by Norwegian manufacturer Kebony and clever reclaimed Wabi Sabi. That’s great, because pressure treated wood often features hazardous chemicals that increase its durability but can be toxic when loose wood dust particles or fine toxic residues are generated. Related: How sustainable is wood?

The Trouble With Tailings: Toxic Waste ‘Time Bombs’ Loom Large Over Alaska’s Salmon Rivers There are a few unarguable truths about mine tailings, the pulverized rock, water and sludge left over from mineral extraction — mining is a messy business, the leftovers have to be dealt with forever and it’s impossible to guarantee against another tailings dam failure such as the Mount Polley catastrophe. In B.C., there are 98 tailings storage facilities at 60 metal and coal mines, of which 31 are operating or under construction and the remaining 67 are at mines that are either permanently or temporarily closed That means communities throughout B.C. and Alaska are looking nervously at nearby tailings ponds, which sometimes more closely resemble lakes, stretching over several square kilometres, with the toxic waste held back by earth and rock-filled dams. The water is usually recycled through the plant when the mine is operating, but, after the mine closes, water, toxins and finely ground rock must continue to be contained or treated. “The concept of forever boggles people minds. B.C.'

Creating 'Living' Buildings The University of Greenwich's School of Architecture & Construction is poised to use ethical synthetic biology to create 'living' materials that could be used to clad buildings and help combat the effects of climate change. Researchers from the University of Greenwich are collaborating with others at the University of Southern Denmark, University of Glasgow and University College London (UCL) to develop materials that could eventually produce water in desert environments or harvest sunlight to produce biofuels. In collaboration with an architectural practice and a building materials' manufacturer, the idea is to use protocells -- bubbles of oil in an aqueous fluid sensitive to light or different chemicals -- to fix carbon from the atmosphere or to create a coral-like skin, which could protect buildings. ''We want to use ethical synthetic biology to create large-scale, real world applications for buildings,'' he says.

Radical Mycology book to be released February 2nd After two years in the making, the book Radical Mycology is set to release February 2nd, 2016! Stay tuned for more info on how to order the book. Pages: 600 pages Book Art: Black and white illustrations and photographs throughout, color plate center section Size: 8 x 10 inch Pub. Fungi are found throughout the world, often playing critical roles at the center of all ecological webs. In 2006 Peter McCoy founded Radical Mycology, a grassroots organization dedicated to increasing awareness of the many ways to work with fungi for personal, societal, and ecological health. Written for the beginner as well as the experienced mycologist, Radical Mycology is an invaluable reference book for anyone interested in Do-It-Yourself (or Do-It-Together) homesteading, community organizing, food security, natural medicine, grassroots bioremediation, and the evolution of human-fungal-ecological relations. Like this: Like Loading... Related

Metabolic Materials as a Measure of Architectural Quality | By Rachel Armstrong Between the 1830’s to 1840’s, the modern public health movement was started in Britain when Edwin Chadwick, advocate for the Poor Law, brought his vision of public health through sanitarianism into being through public works. This ultimately resulted in the construction of modern day water and sewage systems that set standards of urban infrastructure throughout the developed world. Today we are facing a similar urban crisis of environment due to the consequences of living in industrial pollution for the last 150 years. Global warming is a symptom of technological progress coupled with environmental belligerence and is facilitated by the industrial practices of capitalism. Architecture is a technology of environments. The architectural Green movement proposes designs for a nostalgic, rather pantheistic, rural existence that is perceived to be more ‘healthy’ by bringing biology itself into the urban environment in the form of green walls, roofs and even farms.

A Helmet Made of Mushroom Fiber? Whoever said internships had to be boring? This simulation shows how the geodesic structure would unfold into an easily stashed strip. (Image courtesy of Autodesk.) Six students, chosen to participate in Autodesk’s Applied Innovation Internship, spent their summers at Autodesk’s Pier 9 facility. Their mission? To create an original design and push the limits of Autodesk’s CAD/CAE/CAM platform Fusion 360. To this end, these interns designed a unique bicycle helmet. The interns’ solution combined their love of aesthetics and practicality. The video below illustrates the projects the Autodesk interns worked on. Drafting a Unique Helmet To achieve the helmet’s unique foldable characteristic, the team needed to find a plausible structure. This structure, formed by shaping various components into a dome, allows for easy disassembly and storage of the helmet. The students used Autodesk’s Fusion 360 software to draft and design their helmet concept piece by piece. Incorporating Mushroom Fiber