Video: Why Waste Coffee Grounds When Delicious Mushroooms Love to Grow on Them? 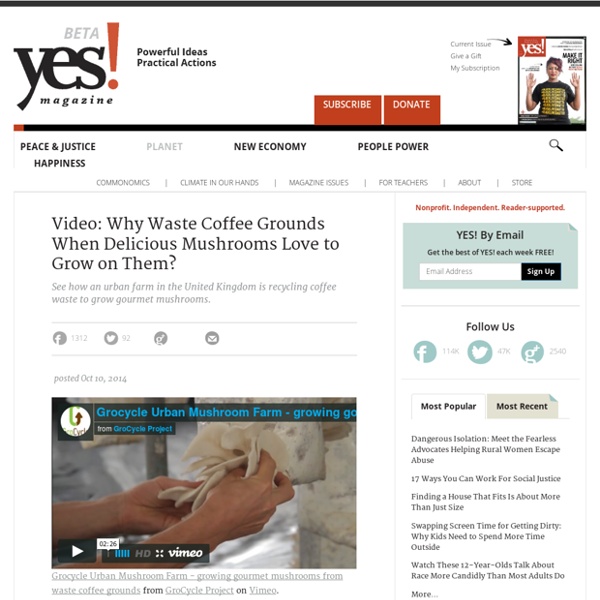 101 Gardening Secrets The Experts Never Tell You I like to use natural top soil to start my garden seedlings in. I usually don't use potting soil because it generally does not produce the results I want. I usually fill a large, deep baking pan I have with top soil and bake it for thirty minutes at 350 degrees. This sanitizes the soil and makes sure that no weeds or grass come up in your soil. I usually start on this project in the winter and I fill up a couple of large plastic barrels with lids with the sanitized soil. I fill my trays up with my potting soil and then I plant my seeds. I cover each seedling with a clear plastic cup that I wash and reuse. If you want to root a plant or cutting in water, add a aspirin or two to the water. If you plant your seeds outdoors sprinkle flavored powdered gelatin in the soil with the seeds. Transplanting Tomatoes Or Pepper Plants When planting any type of tomato or pepper plant, pinch off all but the top leaves of the plant. Then carefully fill the hole with dirt and pack the dirt down tight. 1.

A Delicious & Easy Way To Boost Your Immunity Here is a delicious and easy way to boost your body's ability to respond to allergies, infections and inflammatory conditions. Medicinal mushroom experts have been telling us for years that mushrooms can help prevent numerous immunological conditions, including cancer and inflammatory ailments. Is this simply wishful thinking? Now we find that even so-called culinary mushrooms also have many of these immunity-boosting effects. The most recent evidence comes in the form of a clinical study conducted at the University of Florida's Department of Food Science and Human Nutrition. The researchers conducted a four-week study using 52 healthy young adult volunteers, ages ranging from 21 to 41 years old. The test subjects were divided into two groups. Before and after the four weeks of mushroom consumption, the volunteers' blood and saliva were analyzed. After four weeks of eating the shiitake mushrooms, the subjects showed significant increases in immunity parameters. Additional Research:

Shiitake Mushroom Logs | Frühlingskabine Micro-Farm We are finally, finally getting our “Herb and ‘Shroom Garden” going. And when I say finally, I mean FINALLY. I have been working so hard to get the main garden planted (and reading fiction novels which is quite un-characteristic for this non-fiction bookworm) that I have been struggling to get the Herb and ‘Shroom Garden going. But it is my goal over this next week to be all set in finishing up the rest of my oak logs for shiitake mushrooms and to plant an oasis worth of basil, parsley, rosemary, and other herbs to fill up our teeny, tiny side yard. And as part of that goal, I have finished half of the one hundred (yeah… that’s not a typo) inoculated plugs I ordered. Making your own mushroom logs is this easy: Well, one, you need some 4-6″ diameter hardwood logs. Two, you will need some sort of power/electric drill with a 5/16″ drill bit. First, drill holes about 2″ inches deep in a diamond pattern along your log. Next, you will hammer in one dowel per hole. Like this: Like Loading...

The Most Potent Healing Mushroom on This Planet Photo credit: bigstock.com Of all the hundreds of varieties of edible mushrooms on this planet, one stands head and shoulders above the rest; Cordyceps. Although it has actually been used in traditional Chinese medicine for thousands of years, this mushroom really burst into the mainstream back in 1993 when the women’s track and field runners from China broke nine world records at the Chinese National Games, held that year in Beijing, China. Although Cordyceps has no steroidal compounds, it does improve performance, and helps the body to build muscle. This powerful fungus has been greatly treasured throughout China and has been used for numerous health conditions, as a sexual aphrodisiac, and as an adaptogenic herb, helping people’s body’s better cope with stress. There are two different types of Cordyceps mushrooms, Cordyceps militaris or Cordyceps sinensis. Although we call Cordyceps a medicinal mushroom, it’s actually a fungus. Continue to Page 2 1. 2. Continue to Page 3 3. 4. 5. 6.

Edible Flowers, How to choose Edible Flowers, Eatable Flowers, Edible Flower Chart, List of Edible Flowers, Incredible Edible Flowers Edible flowers are the new rage in haute cuisine Photo of edible flowers picked in Linda's garden in July (lavender, thyme, dill, cilantro, day lily, squash blossom, Nasturtiums, chives, and basil). After falling out of favor for many years, cooking and garnishing with flowers is back in vogue once again. Today, many restaurant chefs and innovative home cooks garnish their entrees with flower blossoms for a touch of elegance. One very important thing that you need to remember is that not every flower is edible. In fact, sampling some flowers can make you very, very sick. You also should NEVER use pesticides or other chemicals on any part of any plant that produces blossoms you plan to eat. Never harvest flowers growing by the roadside. Identify the flower exactly and eat only edible flowers and edible parts of those flowers. Always remember to use flowers sparingly in your recipes due to the digestive complications that can occur with a large consumption rate. Fruit Flowers: Herb Flowers:

Chaga Mushroom: The Immune-Boosting Superfood Chaga (Inonotus Obliquus) is a mushroom that typically grows on birch trees in colder climates across the Northern Hemisphere. At first glance, the mushroom doesn’t look very appealing; actually, it doesn’t even looks like a mushroom at all! Appearances can be deceiving, however, as this special mushroom packs a punch when it comes to its health value. What Is Chaga Mushroom? Chaga has been consumed for centuries in the East, most typically as tea, where its health benefits are well established. What Are the Benefits of Chaga Mushrooms? The health benefits of Chaga are numerous, many of which can be attributed to its immune-boosting ingredients and antioxidants. [1] Let’s go through each of the top 6 health benefits: 1. Chaga has an abundance of Beta-D-Glucans which help balance the response of the body’s immune system. 2. Chaga supports the integrity of blood vessels and provides soothing properties in times of irritation. 3. 4. 5. 6. 7. Antioxidant Properties 1. 2. 3. 4. 5. 6. Quinoa vs.

the tricky matter of when to harvest garlic TIMING IS EVERYTHING, THEY SAY, AND WITH GARLIC HARVEST that’s especially true. But since the crop is hidden underground, how do you know when this edible Allium is ready—when it’s just the right moment to insure a well-formed head that will also store well through the winter and beyond? Like fortune-telling, it’s all in reading the leaves, apparently. Don’t let its relatives mislead you. With garlic, though, waiting until all the leaves go brown will promote overripe bulbs whose cloves are starting to separate from one another, and the resulting un-tight heads won’t store as long. Most “experts” say to harvest when several of the lower leaves go brown, but five or six up top are still green—and depending on the weather, this typically happens here in late July. In the curing there’s another difference between the most popular Allium cousins, garlic and onion: Assuming it’s a dry day when harvest comes, onions can be left out to dry right beside the rows you dug them from. Related

Identify Poisonous Mushrooms: Some Detailed Tips Below you'll find a list of common characteristics to help you identify poisonous mushrooms of the Amanita genus. This list is by no means the final word! Weather and other environmental factors can change the shape of a mushroom, making it difficult to identify. So please remember that this is just a guide to supplement learning, which should be done through books and especially guided forays. An amanita forms as a small button in the shape of an egg. During the young button phase it's easy to mistake an amanita for a puffball. While not all amanitas are deadly, some contain the powerful toxin amanitin. Below are common traits that will help you identify these poisonous mushrooms (with some visual aids, of course!). 1. 2. 3. 4. 5. 6. Amanitas usually start appearing during the second half of the season, in summer and fall. Knowing how to identify poisonous mushrooms will go a long way towards the prevention of poisoning yourself. Not to be tried at home! Return to top ShareThis