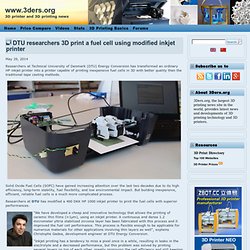 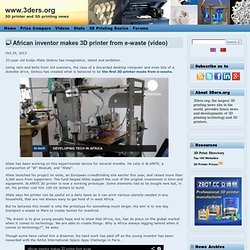 Using rails and belts from old scanners, the case of a discarded desktop computer and even bits of a diskette drive, Gnikou has created what is believed to be the first 3D printer made from e-waste. Afate has been working on this experimental device for several months. He calls it W.AFATE, a composition of "W" WoeLab, and "Afate". Afate launched his project on ulule, an European crowdfunding site earlier this year, and raised more than 4,000 euro from supporters. Afate says his printer can be useful on a daily basis as it can print various utensils needed in any household, that are not always easy to get hold of in west Africa.

But he believes this model is only the prototype for something much larger. "My dream is to give young people hope and to show that Africa, too, has its place on the global market when it comes to technology. LaserOrigami Uses a Laser Cutter to Create 3D Objects Faster than 3D Printers. It’s widely assumed that 3D printing represents the next frontier in fabricating objects of all types, but researchers at Germany’s Hasso Plattner Institute have come up with a novel way of creating 3D objects out of 2D pieces of plastic using a laser cutter. 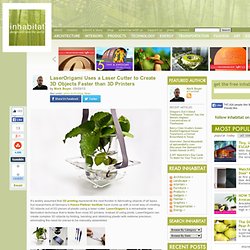 LaserOrigami is a remarkable new fabrication technique that is faster than most 3D printers. Instead of using joints, LaserOrigami can create complex 3D objects by folding, bending and stretching plastic with extreme precision, eliminating the need for pieces to be manually assembled. To create a 3D object, LaserOrigami makes precise cuts in some places, and in others it uses defocused lasers to heat up certain parts of the plastic until they become pliable, bending under the force of gravity. Using a defocused laser enables the machine to administer heat across a larger area, heating it up just enough that it bends into a new shape. 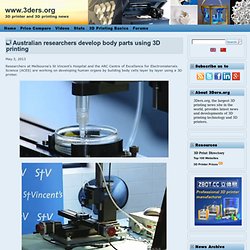 The team has used the 3D printer to make body cells, including muscle cells, nervous systems cells and cartilage. Professor Mark Cook, director of neurosciences at St Vincent's Hospital, said 3D body part printing was like 'bubble jet printers'. "Instead of putting in ink for printing, you can put in these new materials which will grow tissues successfully," he said. ACES director Professor Gordon Wallace said he believed it would be possible to manufacture living tissues like human skin, cartilage, arteries and heart valves which could be used in transplants and other operations within five years. Using a patient's own cells to create this tissue avoids issues of immune rejection, Prof Wallace said. (Images: ABC News Video) 3D Printing Industry - Latest news, insight articles and videos. Open3dp.me.washington.edu. Open source DIY electric kit car crowdfunding on Indiegogo.

Feb.11, 2013 Within three years open-framed, three-wheeled electric vehicles will drive on the roads of Texas. 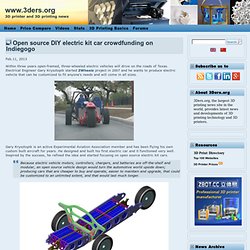 Electrical Engineer Gary Krysztopik started ZWheelz project in 2007 and he wants to produce electric vehicle that can be customized to fit anyone's needs and will come in all sizes. Gary Krysztopik is an active Experimental Aviation Association member and has been flying his own custom built aircraft for years. He designed and built his first electric car and it functioned very well. Inspired by the success, he refined the idea and started focusing on open source electric kit cars. Urbee 2: The world’s first 3D printed car ready for production. Feb.11, 2013 (Photos courtesy of KOR EcoLogic) Jim Kor is printing a car. 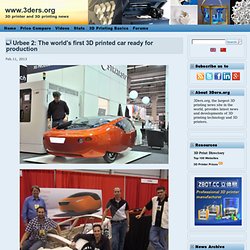 Sam Jacob on 3D printing. Opinion: in this week's column, Sam Jacob argues that instead of liberating us, 3D printing will merely "bind us even more closely to fewer and fewer corporations". 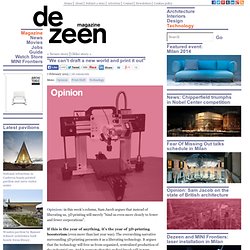 If this is the year of anything, it’s the year of 3D-printing boosterism (even more than last year was). The overarching narrative surrounding 3D printing presents it as a liberating technology. It argues that the technology will free us from organised, centralised production of the industrial era. Filabot Personal Filament Maker for 3D Printers - Desktop Extruding System – Environmentally Friendly. 3D Printing Basics. Table of contents: 1. 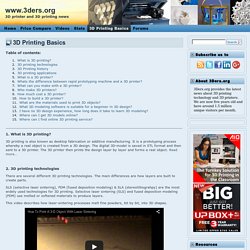 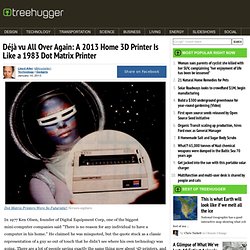 /Screen capture In 1977 Ken Olsen, founder of Digital Equipment Corp, one of the biggest mini-computer companies said "There is no reason for any individual to have a computer in his home. " He claimed he was misquoted, but the quote stuck as a classic representation of a guy so out of touch that he didn't see where his own technology was going. Concept Laser releases New Mlab Cusing R metal 3D printer. Jan.18, 2013 Since Concept Laser introduced the Mlab cusing machines at the start of 2011 they have been opening up the market segment for small delicate components in economic terms. 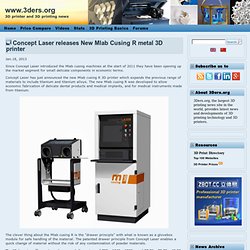 Concept Laser has just announced the new Mlab cusing R 3D printer which expands the previous range of materials to include titanium and titanium alloys. The new Mlab cusing R was developed to allow economic fabrication of delicate dental products and medical implants, and for medical instruments made from titanium. The clever thing about the Mlab cusing R is the "drawer principle" with what is known as a glovebox module for safe handling of the material.

CES 2013: New CubeX 3D Printer Spits Out Objects the Size of Basketballs. © Jaymi Heimbuch 3D System's Cubify printer made a real splash at last year's CES and is back again at this year's with new machines that offer even more options for designing and creating your own objects. The newest version of the Cubify's Cube printer now prints up to 1.5 times faster than the old model, and offers more materials, including both ABS and recyclable PLA plastics. These printers are exciting not only for being able to create your own stuff but also for makers and designers who want to create miniature prototypes of designs cheaply and without waste. The brightly colored printers were hard at work on the tradeshow floor showing off what they're capable of. The Portable Open Source 3D Printer. Artif-Orgs Are Almost Here with 3D Printed Skin. © University of Toronto Sci-Fi writer Philip K. Dick called them Artif-orgs- artificial organs.

3D printing: a replicator and teleporter in every home. In a few years, 3D printers will become a consumer electronics commodity. Today you can buy a MakerBot Thing-O-Matic, “the latest in cutting edge personal manufacturing technology,” for $2,500. You can plug it into your computer via USB, load up some freely-available 3D modeling software, and print stuff; it really is that simple. The only real barrier to mass adoption is the initial purchase price, and the printing material itself isn’t cheap either. Both of these costs will tumble in coming years, however. Printing — or additive manufacturing — techniques will improve. 3D printers will speed up, and the choice of colors and finishes will expand.

In other words, in a few short years, every household will have a device that’s capable of printing any solid object, and even basic mechanical objects. The next step will be 3D printers that come pre-loaded with popular designs. With our current grasp of additive manufacturing, we could do these things now. But what about living things?