New ultrasound research creates holographic objects that can be seen and felt. Haptic feedback has become a common feature of recent technology, but such systems usually rely on stimulation of parts of the user’s body via direct mechanical or acoustic vibration. 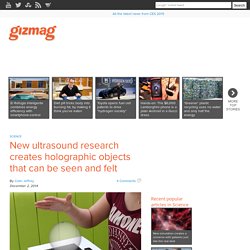 New ultrasound research creates holographic objects that can be seen and felt. Chemists create clever rewritable paper. MisterBrightLight standing desk knows when to get you out of your seat. Embrace medical-quality smartwatch predicts seizures. The Embrace is the first medical-quality smartwatch that helps predict epileptic seizures, and measure stress, activity and sleep. 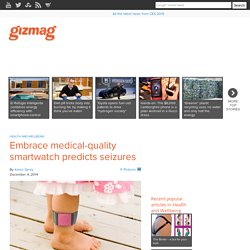 Designed to improve the lives of people with epilepsy, the sleek-looking device can also be worn purely as a stylish watch. View all According to the Institute of Medicine, one in 26 people in the US will suffer from epilepsy at some point in their life. Approximately 65 million people worldwide suffer from the brain disorder. Uno Noteband puts speed reading on your wrist. The Uno Noteband is the first wearable to make use of Spritz, a technology that aims to increase reading speed by showing individual words in quick succession. 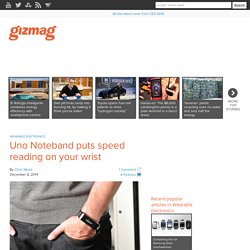 It connects via Bluetooth to Android and iOS devices, offering notifications, fitness tracking and (allegedly) long battery life. View all. Cicret wristband turns your arm into a touch screen. With wearables gaining some traction, smartphones and tablets are by no means the only mobile devices around nowadays. 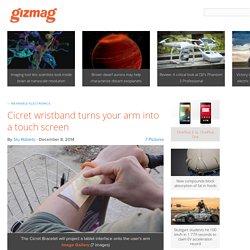 Learn Immersive teaches languages in virtual reality. The trouble with learning a foreign language is that to become fluent – or even just to be passably coherent in a reasonable timeframe – you need to be immersed in it. 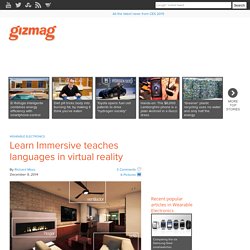 You need to live in a country where that language predominates. But cost or opportunity often make that infeasible. San Francisco startup Learn Immersive wants to create the next best thing. Its two-man team has built a virtual reality platform that transports you to real-world environments and helps you understand them in their native language. 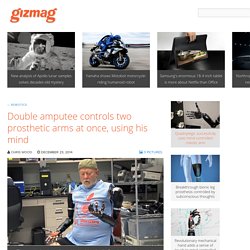 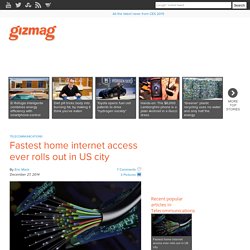 US Internet, based in the Minneapolis suburb of Minnetonka, announced this week that it has begun rolling out 10 gigabit per second internet access, ten times faster than Google Fiber's much-publicized gigabit connections, and similar planned networks in the UK. It's also much faster than typical speeds in South Korea, often cited as having the fastest average connections in the world. The company says that compared to the rest of the United States, 10 Gbps is about 200 times faster than the average home connection nationwide.

The fiber optic service will cost $399 per month and the company claims that it will deliver matching upload and download speeds. New Samsung app aims to aid social development for children with autism. A new app released by Samsung aims to improve the lives of children suffering from autism by presenting a fun, smartphone or tablet-based developmental aid. 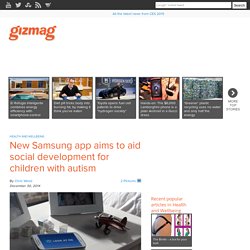 Many who have the condition struggle to convey the simplest of emotions or form bonds with others, due to the behavioral development issues that prevent simple interactions such as eye contact. The app, known as Look At Me, is targeted at improving the quality of life for those growing up with autism by aiding in the development of basic social skills. Narrative gives Clip 2 lifelogging camera better camera, wireless connectivity. Hands-on: Augmented and virtual reality come together in Sulon Cortex. Are augmented reality and virtual reality mutually exclusive? 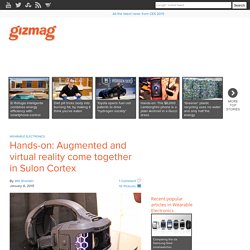 The 3Doodler 3D-printing pen is back and better than before. When WobbleWorks announced its 3Doodler pen a couple of years ago, it caused quite a stir. 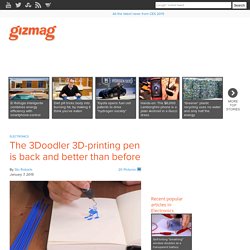 The device allows users to sketch in three dimensions, using strands of molten plastic that harden on contact with the air. Now, the company has announced an updated version. Top 10 emerging technologies for 2014. Technology has become perhaps the greatest agent of change in the modern world. While never without risk, positive technological breakthroughs promise innovative solutions to the most pressing global challenges of our time, from resource scarcity to global environmental change. However, a lack of appropriate investment, outdated regulatory frameworks and gaps in public understanding prevent many promising technologies from achieving their potential.

The World Economic Forum’s Global Agenda Council on Emerging Technologies identifies recent key trends in technological change in its annual list of Top 10 Emerging Technologies. 123D Catch Turns Pictures Into 3D Models. This post is a combination of cross-posts from my other blogs iPadApps4School.com and Android4Schools.com. 123D Catch is a free iPad and Android app. The app makes it possible to turn your pictures into a 3D model that you can manipulate on your iPad or on your Android tablet. To create a model with 123D Catch select a physical object that you can photograph with your tablet or phone. 7 Ed Tech Trends to Watch in 2014. Technology trends in both higher ed and K-12 classrooms continue to evolve and transform traditional learning environments.