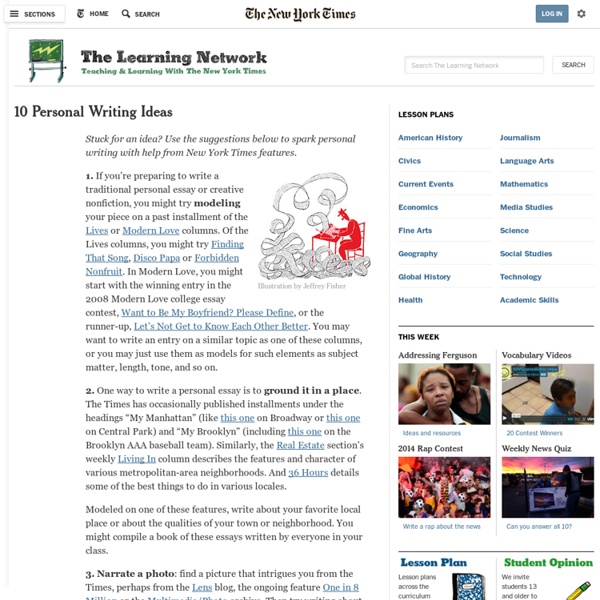 Stuck for an idea? Use the suggestions below to spark personal writing with help from New York Times features. Illustration by Jeffrey Fisher 1. 2. Modeled on one of these features, write about your favorite local place or about the qualities of your town or neighborhood. 3. Or, send a postcard to and/or from the subject of a Times photo, add speech and thought bubbles, or write about a photo that captures American culture. 4. The Learning Network’s Student Opinion featurethe Opinion sectionThe Choice, a blog on college admissionsThe Moral of the Story, a blog on the moral implications of news stories, and The Ethicist, both written by Randy CohenSocial Q’s, questions and answers on awkward or unclear social dilemmasThe Opinionator, which collects opinion from around the Webthe Education sectionthe Most E-mailed and Most Blogged lists. You might word your response as a Letter to the Editor. 5. 6. 7. 8. 9. 10.

150 Resources to Help You Write Better, Faster, and More Persuasively It doesn't matter if you're a student or a professional writer: there's always something new to learn and ways to make your writing more refined, better researched, and more effective. Writing is essential for students who want to succeed, whether they're enrolled in one of the top online colleges or an Ivy League university. As essential as it is, learning to write well isn't easy. The best practices for writing and research can sometimes be subjective, and the finer points of syntax and style often take a backseat to looming deadlines and strict citation guidelines. Luckily, there are many helpful resources that make it easier to build on your existing skills while learning new ones. We've compiled links to sites dedicated to helping students, bloggers, and professional writers improve their techniques while also becoming better editors and researchers. Blogs Copyblogger: On Copyblogger, Brian Clark offers tips on how to improve the content, marketing, and business of a blog. Genres

10 Commandments for a Happy Writer by Nathan Bransford Writers aren't generally known as the happiest lot. As a recent Guardian survey of some top writers shows, even the best ones don't particularly enjoy it all that much. And in case you think this is a new development, an 1842 letter from Edgar Allen Poe to his publisher recently surfaced in which he was found apologizing for drinking so much and begging for money. But believe it or not, writing and happiness can, in fact, go together. For our Thursday entry in Positivity Week, here are ten ways for a writer to stay positive: 1. 2. 3. 4. 5. 6. 7. 8. 9. 10. Nathan Bransford is the author of JACOB WONDERBAR AND THE COSMIC SPACE KAPOW, a middle grade novel about three kids who blast off into space, break the universe, and have to find their way back home, which was published by Dial Books for Young Readers in May 2011.

10 Things Teenage Writers Should Know About Writing Dear Teenage Writers: Hi there. I was once a teenage writer like you (see goofy picture to the right), although that was so long ago that between now and then, I could have been a teenager all over again. I’m going to talk to you about writing as straight as I can; there’s a possibility that some of what I say to you might come off as abrupt and condescending. 1. It’s nothing personal. There are reasons for this. a) You’re really young. Now, if you’re really good, you can fake perspective and wisdom, and with it a voice, which is almost as good as having the real thing. b) You’re besotted by your influences. You are not likely to have my influences, but you almost certainly have influences of some sort, who you love and to whom you look as models and teachers. c) When you’re young, it’s easier to be clever than to be good. There’s nothing wrong with being clever, and it’s possible to be clever and good at the same time. So those are some of the reasons your writing sucks right now. 2.

4 Warning Signs Your Novel Isn’t Working By Jennifer Blanchard As writers, we tend to “fall in love” with the stuff we’re working on—whether that be our blog, a novel we’re writing, a short story, our poetry or any other number of things. I’m the first one to argue that love and passion are an extremely important part of being a writer. But when that love and passion is being spent on a writing project that just doesn’t seem to be working, it’s time to take a step back and evaluate things. Here’s an example of what I’m talking about. In 2008, I finished my first novel. Then came step two, editing and rewriting the draft. And two years later, step two is still in the half-way stages. I’ve followed all of the advice in Larry Brooks’ eBook, Story Structure—Demystified. But no matter how much time and effort I put into it. It’s now time for me to tell myself the one truth no writer wants to hear, let alone utter—The story isn’t working. This realization is still a bit new for me, so the wound hasn’t quite healed.

57 Tips For Writers, From Writers The entire writing process is fraught with perils. Many writers would argue that the hardest part of writing is beginning. When asked what was the most frightening thing he had ever encountered, novelist Ernest Hemingway said, “A blank sheet of paper.” Other writers believe that ideas are easy, it’s in the execution of those ideas that the hard work really begins. You have to show up every day and slowly give shape to your ideas, trying to find just the right words, searching for the right turn of phrase, until it all morphs into something real. So just how do you go about facing an empty page, coaxing your ideas into the world of form, and steering the end result toward shore? Tips For Writers From Stephen King “If you want to be a writer,” says Stephen King , “you must do two things above all others: read a lot and write a lot.” King, who has written over 50 books, emphasizes that writers have to be well-read. Tips For Writers From John Grisham Tips For Writers From Erica Jong 1. 2. 3. 4.

7 Ways to Stop Procrastinating and Start Writing Procrastination is like leaving the headlights on in a parked car: it’s a slow drain on your mental battery. The longer the lights are on, the harder it is to get the engine started. By continually avoiding doing something you know you need to do, procrastination sucks the energy out of you. This is doubly true for a task like writing. The longer you procrastinate writing a piece, the harder it becomes to start. However, even if you put off a task for weeks or months, it’s never too late to start. Procrastination is usually a symptom of some other problem: poor preparation, perfectionism, a fear of failure or rejection, or just a simple lack of motivation and interest. The reason you left your headlights on isn’t important. • Organize Your Ideas - Staring at a blank screen with no support materials or written notes is like building a house without a blueprint: the end result will be a mess and it could kill someone. • Freewrite – Forget about logical flow for a minute. Seth M.

Baby Boomers Write By Audrey Owen Are you are a baby boomer visiting this site? You are or could become a baby boomer writer. As a writer and an editor, I notice that baby boomer writers sit in the enviable position of looking both backward and forward. If we look back on our lives we discover, sometimes to our utter shock, that we grew up in historical times. Anything from our young lives counts as history. There is a place for memoir in the world of literature. Baby boomer writers can look ahead as well as back. If you think you may need to reinvest some of your money to prepare better for retirement, put your research to work in a secondary stream by writing a book or Web site for others in the same position. Are you facing an empty nest? Can you put your past and future together? As baby boomer writers we can use where we've been and look into the future, enriching both those coming after and those who have gone before us. If you are a baby boomer writer, submit your work for a sample edit here.