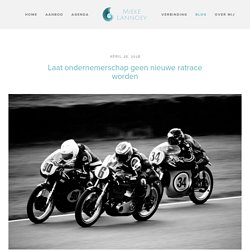 How to set-up a Y-Community in your company? - Activities - ADM. The format of a Y-Community is not important - it can be very informal or very formal. 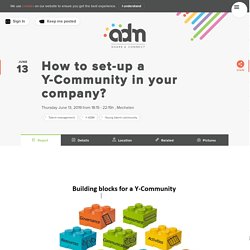 As long as it fits the company culture, it will be a valuable contributor to the job satisfaction of the (young) employees, ànd consequently to their productivity. That was the conclusion of the Y-ADM experts. They defined 9 building blocks to help you set-up a Y-community! During our brainstorming session in November 2018 on how to companies organise their Y-community, it was obvious that everybody had a different way to go about, had different experiences ..

That lead to the idea to assemble these best practices in order to inspire others. Four evening working sessions filled with many ideas and discussion later, the hero's* of the ADM session on 13 June presented the building blocks that they identified and that can help a company to set up a Y-community. On the "related" tab on this page, you will find the powerpoint of the evening, a write-up of the whole presentation. Sustainable Higher Education - Future Forward (58 books) Most of the $2 billion spent on focus groups last year was wasted. - Let's Take a Closer Look. Thousands of businesses threw away their money last year because they used focus groups for some very bad reasons. 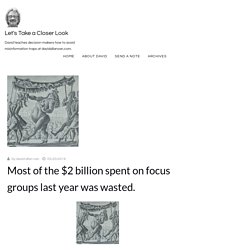 Most wanted to validate decisions they’d already made. Focus groups are great for this, as participants can be easily steered to provide the answers you’re looking for. All you have to do is have a cooperative moderator, stack the deck with leading questions, and make it absolutely clear that you are not only looking for agreement, but for group consensus.Too many treated focus groups as quantitative data. Nothing is more absurd than counting qualitative responses as if they were part of a statistically valid sample of randomly selected participants.Some did groups because they liked the voyeuristic feel of sitting in the dark behind a mirror eavesdropping on the conversations of others. Erika Hall of Mule Design calls focus groups “useless research theatre.” Most of us learned the hard way how what people say is not always what they do. Here’s a simple example. 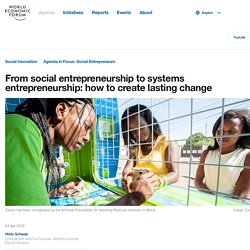 My husband Klaus Schwab and I started the Schwab Foundation for Social Entrepreneurship because we sensed that a distinct, more entrepreneurial approach to alleviating problems associated with poverty and social and environmental challenges was emerging. We saw a new generation of social entrepreneurs who channelled their passion, resources, creativity and sense of injustice into finding new ways to achieve real change. Too often however, especially in the early years, they worked in relative obscurity in their home countries. They typically had trouble accessing high-level decision-makers who could support their efforts or help them scale, and they were frequently misunderstood by authorities, funders, the media and the general public. 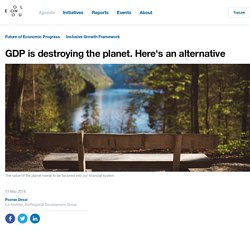 We need economic growth, but we cannot continue to measure it using GDP. We need a ‘quality adjusted’ GDP linked to transactions which recognise how much social and natural capital they are building. Although the International Energy Association reported that carbon emissions stabilised for 3 years in the 2014-2016, the best estimates for 2017, which are waiting formal confirmation, are that they increased 2%. This is in the context of Christina Figueres, former chair of the UN Framework Convention on Climate Change, together with leading scientists, saying that we have “three years for carbon emissions to peak and drop rapidly to avoid catastrophic climate change”. That was June 2017. Despite the urgency of the situation, we still talk about the economic and business case for sustainability. Money is lent to people and growth is needed to repay the debt created. Image: Credit Suisse Share. Build Your Venture from Scratch - Bundl.