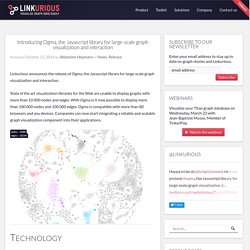 State of the art visualization libraries for the Web are unable to display graphs with more than 10 000 nodes and edges. With Ogma is it now possible to display more than 100 000 nodes and 100 000 edges. Ogma is compatible with more than 80 browsers and any devices. Companies can now start integrating a reliable and scalable graph visualization component into their applications. Technology Modular architecture Ogma makes it possible by leveraging the full performances of WebGL combined with a modular architecture. Dynamic graphs The library is designed for graphs with living data where nodes, edges, and their properties can change in real time due to user interactions or updates from data sources. Level-of-details A key challenge in visualizing large dynamic graphs is to display the less information possible on screen to avoid getting overwhelmed by the amount of data.

Data Wrangler. UPDATE: The Stanford/Berkeley Wrangler research project is complete, and the software is no longer actively supported. 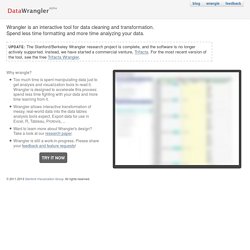 Instead, we have started a commercial venture, Trifacta. For the most recent version of the tool, see the free Trifacta Wrangler. Why wrangle? Too much time is spent manipulating data just to get analysis and visualization tools to read it. iVisDesigner. iVisDesigner stands for Information Visualization Designer, which is a platform in which users can interactively create customized information visualization designs for a wide range of data structure. iVisDesigner was started around March 2013 as the undergraduate thesis project of Donghao Ren, its overall goal comes partially from the previous Visualization Assembly Line project, which allows users to freely create axis-based visualizations for multidimensional datasets, like scatterplots and parallel coordinates. 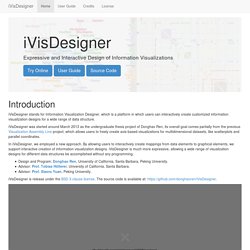 In iVisDesigner, we employed a new approach. By allowing users to interactively create mappings from data elements to graphical elements, we support interactive creation of information visualization designs. iVisDesigner is much more expressive, allowing a wide range of visualization designs for different data structures be accomplished without any programming. Welcome. DataBasic.io. Ly.js Open-Source Announcement. November 17, 2015 A growing number of graphing tools and libraries allow anyone to make beautiful, interactive web-based graphs. 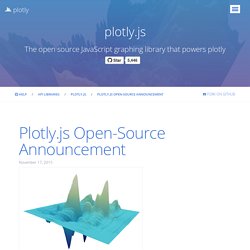 By interactively visualizing our data online, we share complex ideas in an exploratory, visual, open, and collaborative way. Today, Plotly is announcing that we have open-sourced plotly.js, the core technology and JavaScript graphing library behind Plotly’s products (MIT license). It's all out there and free. Any developer can now integrate Plotly’s library into their own applications unencumbered. We’re big fans of collaboration, freedom, and perpetual motion. Despite the possibilities that the web offers, the core plotting libraries in scientific software like MATLAB, R, and Python still create static image files rather than dynamic, interactive charts. Tilegrams: More Human Maps. About a month ago, while plotting demographic data on a US county map, we became frustrated. 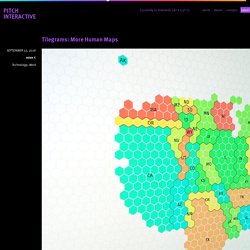 The data was about employment in the financial industry, and we expected to see Manhattan light up—but on our map, Manhattan was barely bigger than a freckle. Meanwhile, thinly populated rural counties (ahem, Lincoln County, Nevada) occupied vast swaths of screen space. Much of the West was visually over-represented, while urban areas were not represented enough. There’s an essential rural bias in geographic visualizations that we needed to overcome. 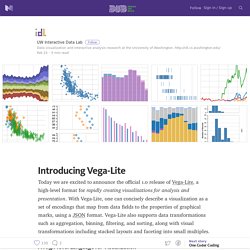 Vega-Lite’s compiler automatically chooses default properties of a visualization based on a set of carefully designed rules. However, one can specify additional properties to customize the visualization. For example, the stacked bar chart on the left has a custom color palette. 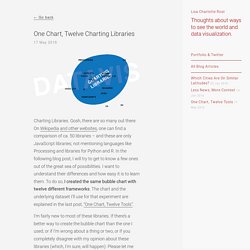 Gosh, there are so many out there. On Wikipedia and other websites, one can find a comparison of ca. 50 libraries – and these are only JavaScript libraries; not mentioning languages like Processing and libraries for Python and R. In the following blog post, I will try to get to know a few ones out of the great sea of possibilities. I want to understand their differences and how easy it is to learn them. I’m fairly new to most of these libraries. R – native R is the hippest statistical language around these days. #set working directorysetwd("Desktop") #read csvd = read.csv("data.csv", header=TRUE) #plot chart, set range for x-axis between 0 and 11symbols(log(d$income),d$health,circles=d$population,xlim = c(0,11)) R – ggplot2 Native R is ok, but ggplot2 is where the fun begins.

One Chart, Twelve Tools · Lisa Charlotte Rost. 17 May 2016 Which tool or charting framework do you use to visualize data? 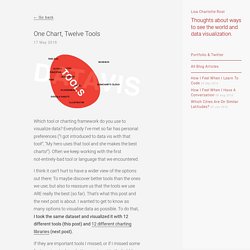 Everybody I’ve met so far has personal preferences (“I got introduced to data vis with that tool!” , “My hero uses that tool and she makes the best charts!”). Often we keep working with the first not-entirely-bad tool or language that we encountered. I think it can’t hurt to have a wider view of the options out there: To maybe discover better tools than the ones we use; but also to reassure us that the tools we use ARE really the best (so far). Data visualization & presentation tool. 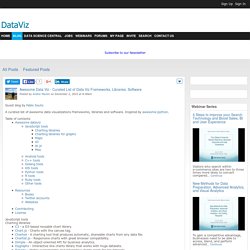 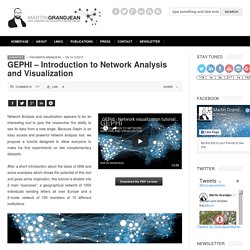 Because Gephi is an easy access and powerful network analysis tool, we propose a tutorial designed to allow everyone to make his first experiments on two complementary datasets. After a short introduction about the basis of SNA and some examples which shows the potential of this tool and gives some inspiration, this tutorial is divided into 2 main “exercices”: a geographical network of 1000 individuals sending letters all over Europe and a 2-mode network of 100 members of 10 different institutions. 1.1 A short introduction to Social Network Analysis.

Datavisualization.ch Selected Tools. Vega: A Visualization Grammar. iNZight for Data Analysis. The 38 best tools for data visualization. It's often said that data is the new world currency, and the web is the exchange bureau through which it's traded. As consumers, we're positively swimming in data; it's everywhere from labels on food packaging design to World Health Organisation reports. As a result, for the designer it's becoming increasingly difficult to present data in a way that stands out from the mass of competing data streams.

One of the best ways to get your message across is to use a visualization to quickly draw attention to the key messages, and by presenting data visually it's also possible to uncover surprising patterns and observations that wouldn't be apparent from looking at stats alone. And nowadays, there's plenty of free graphic design software to help you do just that. As author, data journalist and information designer David McCandless said in his TED talk: "By visualizing information, we turn it into a landscape that you can explore with your eyes, a sort of information map. 01. 02. 03. 04.

Vischeck: Home. Welcome. NodeBox is a node-based software application for generative design. It's built from the ground up by designers to be easy-to-use, efficient, and fast. p5.js. Makinguse - carlo zapponi. Flik - Business Intelligence. Tableau - Business Intelligence and Analytics. Make charts and dashboards online.