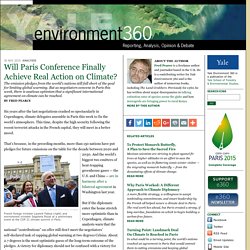 This time, despite the high security following the recent terrorist attacks in the French capital, they will meet in a better mood. That’s because, in the preceding months, more than 150 nations have put pledges for future emissions on the table for the decade between 2020 and Thomas Samson/AFP/Getty Images. COP21 - L'énergie du futur : "Le roi pétrole se meurt, vive le roi charbon" The Paris Climate Talks Will Be a Historic Success. And a Historic Disaster. Here’s how to think about what happens in Paris over the course of the next two weeks: The conference isn’t the game — it’s the scoreboard. 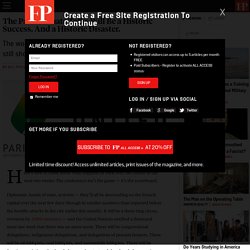 Diplomats, heads of state, activists — they’ll all be descending on the French capital over the next few days (though in smaller numbers than expected before the horrific attacks in the city earlier this month). It will be a three-ring circus, overseen by 3,000 reporters — and the United Nations notified a thousand more last week that there was no more room. There will be congressional delegations, indigenous delegations, and delegations of peasant farmers. There will be oil lobbyists, coal lobbyists, and automobile lobbyists.

There will be frantic negotiations that break down and restart and then break down again. But for the most part the decisions have already been made. Paris will go better. First, engineers have upped their game. And it means that much is possible we couldn’t have dreamed of just a few years ago. And they will. Paris climate conference: How public development banks can boost private climate investment. The 2015 United Nations Climate Change Conference began in Paris on 30 November. 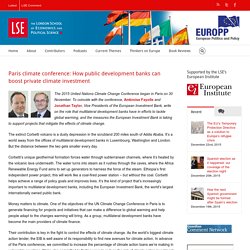 To coincide with the conference, Ambroise Fayolle and Jonathan Taylor, Vice Presidents of the European Investment Bank, write on the role that multilateral development banks have in efforts to tackle global warming, and the measures the European Investment Bank is taking to support projects that mitigate the effects of climate change. The extinct Corbetti volcano is a dusty depression in the scrubland 200 miles south of Addis Ababa. It’s a world away from the offices of multilateral development banks in Luxembourg, Washington and London. But the distance between the two gets smaller every day. Corbetti’s unique geothermal formation forces water through subterranean channels, where it’s heated by the volcanic lava underneath.

Money matters to climate. Their contribution is key in the fight to control the effects of climate change. Of course, climate action works anywhere in the world. None of this is easy. 5 ways a climate deal would benefit the economy. We know that Paris could determine our ability to keep global warming below 2 degrees and avoid its catastrophic impacts. 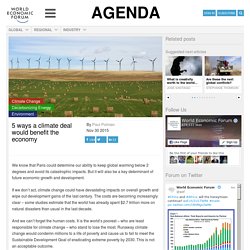 But it will also be a key determinant of future economic growth and development. If we don’t act, climate change could have devastating impacts on overall growth and wipe out development gains of the last century. The costs are becoming increasingly clear – some studies estimate that the world has already spent $2.7 trillion more on natural disasters than usual in the last decade. And we can’t forget the human costs. It is the world’s poorest – who are least responsible for climate change – who stand to lose the most. Beyond the imperative of avoiding these disastrous impacts, there’s actually a strong economic opportunity in addressing climate change. At Unilever, we’re already starting to see the results of our ambition to decouple growth from our environmental footprint. COP21: 9 questions for a renewable energy expert. Mark Jacobson is a Stanford University professor and director at The Solutions Project, which aims to help the world move to 100% renewable energy. 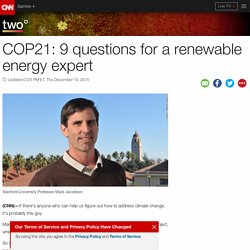 So it's no wonder so many of you joined us on Facebook to bring him your most pressing questions and concerns about Earth's future. Here are some of the questions you posed along with Jacobson's answers, live from the COP21 climate conference in Paris. Question: With so many billionaires and government bodies that have invested so much in these industries that cause or produce pollutions, the issue of climate change will only seem like an anti-profit call to their investments. How do you hope to go about addressing their fears?

Jacobson: Changing to an entirely clean, renewable wind, water, solar (WWS) energy economy will create 22 million more jobs worldwide than the fossil economy and save society $25-50 trillion per year in health and climate costs while stabilizing energy prices and reducing international conflict. Fossil Fuel Companies Desperate to Influence Decisions at COP21 - TheQuint. Following the launch of the International Solar Alliance by Prime Minister Narendra Modi in Paris last week, the Guardian newspaper has reported that the companies involved in the alliance include Areva, Engie, Enel, HSBC France and Tata Steel. 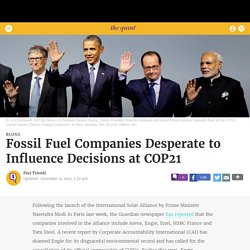 A recent report by Corporate Accountability International (CAI) has shamed Engie for its disgraceful environmental record and has called for the cancellation of its official sponsorship of COP21. Earlier this year, Engie announced that it will not build new coal plants. Replying to the claims made by CAI, Engie replied that, ‘All of us are concerned by the question of climate: governments, companies and citizens. Some actors, like ENGIE, are already mobilised and propose solutions in order to reduce greenhouse gas. ENGIE supports an equitable world climate agreement in order to limit global warming to 2°C.