The Visual Display of Quantitative Information. Algebrarules.com: The Most Useful Rules of Basic Algebra. Reclaiming Data Trusts. While we’re far from settled practice, there are currently at least three prevalent types of use cases for data trusts: multi-stakeholder data and intellectual property-sharing relationships for individual gain; organizations building functional infrastructure to support the development or distribution of shared digital assets; and groups using data, infrastructure or services to align a group’s interests around a common purpose. 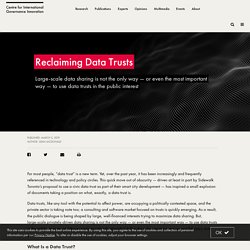 Each of these use cases represents a functionally different relationship context and set of resulting operational requirements. Blockchain Just Became Obsolete. The Future is Hashgraph. Swirlds is a software platform that has developed the hashgraph consensus algorithm: an entirely new distributed ledger technology that is much more cost-effective (no proof-of-work), 50,000 times the speed, safer (Byzantine), more efficient (no stale blocks) and mathematically fairer than the blockchain. 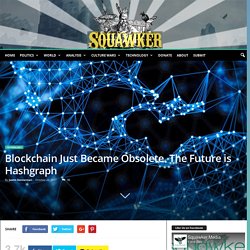 Let the Dataset Change the Mindset. I was born and raised in California, but there has never been a time when I haven’t felt, in the deepest part of the very core of my being, that I was made for New York City. 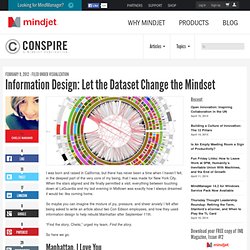 When the stars aligned and life finally permitted a visit, everything between touching down at LaGuardia and my last evening in Midtown was exactly how I always dreamed it would be: like coming home. So maybe you can imagine the mixture of joy, pressure, and sheer anxiety I felt after being asked to write an article about two Con Edison employees, and how they used information design to help rebuild Manhattan after September 11th.

“Find the story, Chelsi,” urged my team. Find the story. So here we go. Manhattan, I Love You After a chat with another Con Edison employee, Systems Specialist David Hill, it was decided that a mind map was in order. Are You a Curator or a Dumper? Pretty pictures: Can images stop data overload? 16 April 2012Last updated at 19:01 ET By Fiona Graham Technology of business reporter, BBC News Brain scan: Research suggests that one way to avoid being overloaded by data is by presenting it visually rather than text or numbers Sitting at your desk in the middle of the day, yet another email notification pops up in the corner of the screen, covering the figures you're trying to digest in the complicated spreadsheet in front of you. 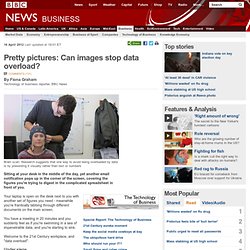 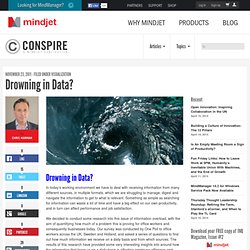 In today’s working environment we have to deal with receiving information from many different sources, in multiple formats, which we are struggling to manage, digest and navigate the information to get to what is relevant. Mindjet Drowning in Data. Data Ethics - What Is It Good For? Data ethics might be complicated, but it is essential to business success The field of data ethics (or tech ethics, or AI ethics, or responsible AI…) has been having something of a moment. 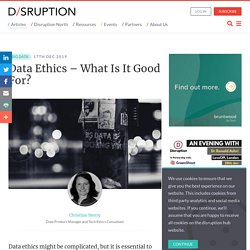 A recent study showed there were close to 100 sets of data or AI ethics principles out there. (Full disclosure: I’ve worked on some too!) There’s been enough of a trend that it has already got its own backlash on various grounds: that the ethics are good but not practical enough to make decisions (and so we need tools…); that (some) organisations are building principles in an attempt to avoid regulation (ethics washing); that human rights legislation already protects people and the attempt to make AI rules look like a different thing is to duck engaging with that, as well as contributing in itself to a story about the inevitability and power of tech.

Doing Data for Good Right. As an organization focused on using data science to support humanitarian issues, DataKind knows that ethics are of the utmost importance. 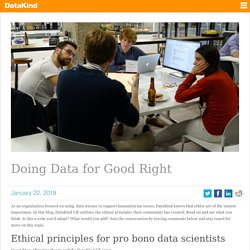 In this blog, DataKind UK outlines the ethical principles their community has created. Read on and see what you think. Is this a code you’d adopt? What would you add? Join the conversation by leaving comments below and stay tuned for more on this topic. Project Nightingale: What Does Google Know About Your Health? The Wall Street Journal reports Google’s ‘Project Nightingale’ Gathers Personal Health Data on Millions of Americans. 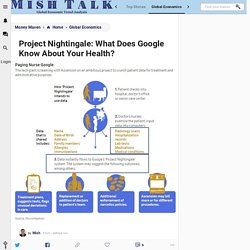 Google is engaged with one of the U.S.’s largest health-care systems on a project to collect and crunch the detailed personal-health information of millions of people across 21 states. The initiative, code-named “Project Nightingale,” appears to be the biggest effort yet by a Silicon Valley giant to gain a toehold in the health-care industry through the handling of patients’ medical data. Amazon.com Inc., Apple Inc. and Microsoft Corp. are also aggressively pushing into health care, though they haven’t yet struck deals of this scope. Google began Project Nightingale in secret last year with St. Louis-based Ascension, a Catholic chain of 2,600 hospitals, doctors’ offices and other facilities, with the data sharing accelerating since summer, according to internal documents. Federal Inquiry Underway. Seeing Theory - Probability and statistics. The Data Visualisation Catalogue. Information Is Beautiful.

Data Visualization, Infographics, and Statistics. How to use Our World in Data. We try to make the embed tool as useful as possible: For example, you can focus on Africa instead of World in the map above; and you can move the time slider to 2015 (you will get this). 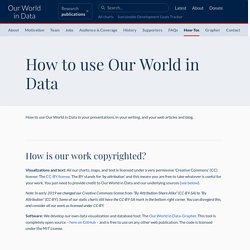 Now when you click on </> Embed you get the following bit of code: If you copy-paste this code your article will embed the map with a focus on Africa and the fertility rate for 2015. And the same works for the chart view. Create Infographics, Presentations & Flyers. AIyaiYAIyiyAI.