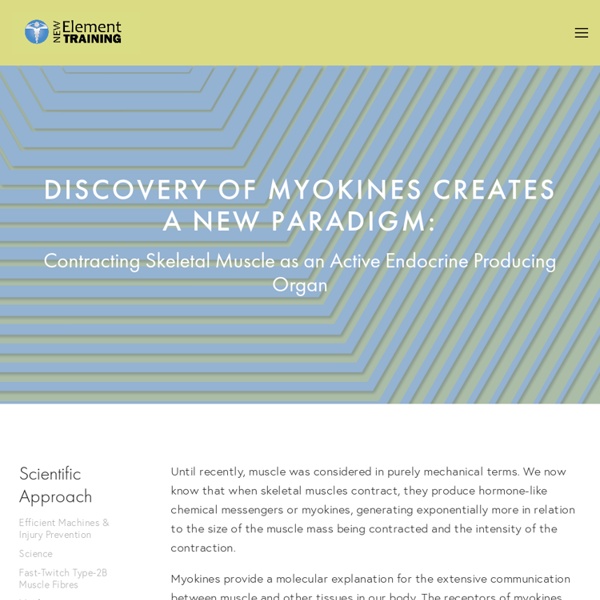 Neuroanthropology This page gathers together several type of resources: our on-site resources to help you explore anthropology and the brain sciences; sites which provide news and info on anthropology and on brain science; some sites which present tutorials or overviews of neuroscience (including brain disorders); and finally some blogs of interest (which need updating, so check our blogroll too…). This page is a work in progress, so if you want to make a worthy addition, please leave a comment below or email me at dlende @ nd.edu On Site Younger Skin Through Exercise Photo Phys Ed Gretchen Reynolds on the science of fitness. Editors’ note: We’re featuring thes article again because who doesn’t want to look younger? Exercise not only appears to keep skin younger, it may also even reverse skin aging in people who start exercising late in life, according to surprising new research.

Panic Attack Symptoms + 10 Unexpected Panic Attack Triggers Have you ever experienced panic attack symptoms? If you have, then you know that the sensations are so intense it feels like you could be having a heart attack or other serious health issue. Panic attacks are characterized by a fear of losing control or surviving a disaster, even though there is no real danger in that moment. Network structure and dynamics of the mental workspace Author Affiliations Edited by Michael S. Gazzaniga, University of California, Santa Barbara, CA, and approved August 28, 2013 (received for review June 11, 2013)

Glutathione: Top 9 Foods & Supplements to Boost It Coined “The Mother of All Antioxidants” by Mark Hyman, MD, glutathione is one of the hottest topics in both natural health and medical circles today. (1) Pronounced “gloota-thigh-own,” over 139,000 peer-reviewed scientific articles have addressed this powerhouse molecule, and experts are now recognizing that an alarming rate of people are deficient because of: Pre-mature agingInfectionsChronic stressInjuriesEnvironmental toxinsSo-called “health foods”Genetically modified foodsArtificial sweetenersOveruse of antibioticsAnd radiation therapy that is all too easily given to cancer patients today. What Is Glutathione?

Evolutionary Psychiatry: Depression crashed your party I've told you before I like Dr. Maes. Turns out he's been working the depression = inflammation angle for the past twenty years, isolating all the cellular mechanisms while we were all busy getting bored by drug reps peddling their newest serotonin reuptake inhibitors. Maes is not only brilliant, but cranky. The main page of his website is devoted to accusing a Dr. Dantzer of stealing his ideas, and much of the introduction of this brand new paper harps on the fact that Dowlati's recent major meta-analysis of depression and inflammation left out much of Maes' work.

How and where imagination occurs in human brains Philosophers and scientists have long puzzled over where human imagination comes from. In other words, what makes humans able to create art, invent tools, think scientifically and perform other incredibly diverse behaviors? The answer, Dartmouth researchers conclude in a new study, lies in a widespread neural network -- the brain's "mental workspace" -- that consciously manipulates images, symbols, ideas and theories and gives humans the laser-like mental focus needed to solve complex problems and come up with new ideas. Their findings, titled "Network structure and dynamics of the mental workspace," appear the week of Sept. 16 in the Proceedings of the National Academy of Sciences. "Our findings move us closer to understanding how the organization of our brains sets us apart from other species and provides such a rich internal playground for us to think freely and creatively," says lead author Alex Schlegel , a graduate student in the Department of Psychological and Brain Sciences.

Reduce Depression with Posture Researchers have found evidence suggesting that feelings of depression can be lessened simply by sitting up straight, rather than slouching. It’s estimated that between 7% and 10% of the American population suffers from some type of depression. While many seek treatment through the use of anti-depressant drugs, a growing number of people look for non-drug related therapies. Exercise, acupuncture, meditation, yoga, light therapy, and diet among others have been included in that group of remedies. Now, a new study suggests another non-drug avenue to explore.

Science Isn’t Broken Graphics by Ritchie King If you follow the headlines, your confidence in science may have taken a hit lately. Peer review? More like self-review. An investigation in November uncovered a scam in which researchers were rubber-stamping their own work, circumventing peer review at five high-profile publishers. Scientific journals?

Yoga reduces cytokine levels known to promote inflammation, study shows Regularly practicing yoga exercises may lower a number of compounds in the blood and reduce the level of inflammation that normally rises because of both normal aging and stress, a new study has shown. The study, done by Ohio State University researchers and just reported in the journal Psychosomatic Medicine, showed that women who routinely practiced yoga had lower amounts of the cytokine interleukin-6 (IL-6) in their blood. The women also showed smaller increases in IL-6 after stressful experiences than did women who were the same age and weight but who were not yoga practitioners. IL-6 is an important part of the body's inflammatory response and has been implicated in heart disease, stroke, type-2 diabetes, arthritis and a host of other age-related debilitating diseases. Reducing inflammation may provide substantial short- and long-term health benefits, the researchers suggest.

Big hospital systems buying up public hospitals Among other problems with for-profit health systems is that even when they work today, tomorrow is not likely to bode well for patients. The good hospitals that spend money to deliver high-value care and still succeed financially are a smart investment for the predator companies that acquire them, knowing they can profit big time off of them. Not surprisingly, big hospital systems are buying up public hospitals. Of course, the bigger the hospital systems, the greater the power they have over costs.

It’s time for science to abandon the term ‘statistically significant’ The aim of science is to establish facts, as accurately as possible. It is therefore crucially important to determine whether an observed phenomenon is real, or whether it’s the result of pure chance. If you declare that you’ve discovered something when in fact it’s just random, that’s called a false discovery or a false positive.