* Are You a Curator or a Dumper? 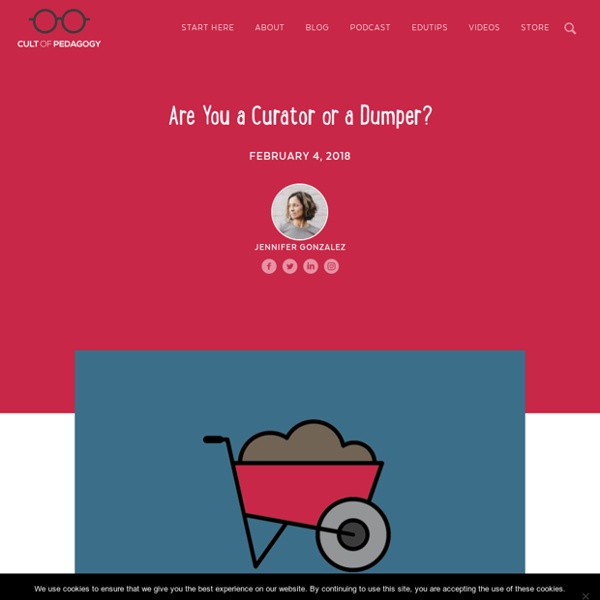 *Curation Situations: Let us count the ways Curation is a funny word. When my colleagues and I wrote our Social Media Curation Library Technology Report for ALA, we struggled with a definition. The folks we interviewed across library land curated in several different ways and we used the term curation differently depending on current community needs or where they were in any particular project. Richest 1% on target to own two-thirds of all wealth by 2030 The world’s richest 1% are on course to control as much as two-thirds of the world’s wealth by 2030, according to a shocking analysis that has lead to a cross-party call for action. World leaders are being warned that the continued accumulation of wealth at the top will fuel growing distrust and anger over the coming decade unless action is taken to restore the balance. An alarming projection produced by the House of Commons library suggests that if trends seen since the 2008 financial crash were to continue, then the top 1% will hold 64% of the world’s wealth by 2030.

Let the Dataset Change the Mindset I was born and raised in California, but there has never been a time when I haven’t felt, in the deepest part of the very core of my being, that I was made for New York City. When the stars aligned and life finally permitted a visit, everything between touching down at LaGuardia and my last evening in Midtown was exactly how I always dreamed it would be: like coming home. So maybe you can imagine the mixture of joy, pressure, and sheer anxiety I felt after being asked to write an article about two Con Edison employees, and how they used information design to help rebuild Manhattan after September 11th. Tool literacy as a new process I’ve been thinking a bit about the notion of app smashing and the way we introduce learning challenges in our classrooms and libraries. And I am thinking there’s a thinking process going on that we’re not thinking about nearly enough. The Evolution of the Desk by Best Reviews Introducing a tool and saying you are going to use this tool to tell this story is kinda like saying go to page 347 and do exercises three through five. The notion of app smashing was coined by Greg Kulowiec (@gregkulowiec) of EdTechTeacher Loosely, it’s the process of using multiple applications together in order to to complete complex tasks or projects.

Pretty pictures: Can images stop data overload? 16 April 2012Last updated at 19:01 ET By Fiona Graham Technology of business reporter, BBC News Brain scan: Research suggests that one way to avoid being overloaded by data is by presenting it visually rather than text or numbers Sitting at your desk in the middle of the day, yet another email notification pops up in the corner of the screen, covering the figures you're trying to digest in the complicated spreadsheet in front of you. HyperDocs and the teacher librarian The concept of HyperDocs is spreading all over edtech land. HyperDocs are perfect opportunities to grow teacher librarian/ classroom teacher partnerships. A true extension of what TLs do or should be doing in a hyperlinked information landscape, HyperDocs are all about curation and collaboration, instruction based on engaged inquiry, as well as our mission to inspire learning communities to think, create, share and grow. While it’s quite possible you’ve been building HyperDocs-like instruction for years on a variety of platforms, we can now connect our work to an accepted model and a growing and generous community!

Drowning in Data? Drowning in Data? In today’s working environment we have to deal with receiving information from many different sources, in multiple formats, which we are struggling to manage, digest and navigate the information to get to what is relevant. Something as simple as searching for information can waste a lot of time and have a big effect on our own productivity, and in turn can affect performance and job satisfaction. We decided to conduct some research into this issue of information overload, with the aim of quantifying how much of a problem this is proving for office workers and consequently businesses today. Our survey was conducted by One Poll to office workers across the UK, Sweden and Holland, and asked a series of questions to find out how much information we receive on a daily basis and from which sources.

The 5 Models Of Content Curation Curation has always been an underrated form of creation. The Getty Center in Los Angeles is one of the most frequently visited museums in America – and started as a private art collection from one man (J. Paul Getty) who had a passion for art. Aside from a few well known examples like this one, however, the term curation has rarely been used outside of the world of art … until now. One of the hottest trends in social media right now is content curation – thanks in no small part to the leading efforts of several thought leaders actively promoting the idea.