Social isolation can be defined as having the lack of social connections or interactions between the people around an individual such as family, friends and neighbours.

Recognizing the Signs of Isolation. It’s natural to worry about a single or widowed parent being lonely. 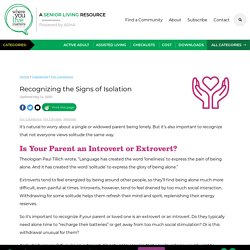 But it’s also important to recognize that not everyone views solitude the same way. Is Your Parent an Introvert or Extrovert? Theologian Paul Tillich wrote, “Language has created the word ‘loneliness’ to express the pain of being alone. And it has created the word ‘solitude’ to express the glory of being alone.” Extroverts tend to feel energized by being around other people, so they’ll find being alone much more difficult, even painful at times. So it’s important to recognize if your parent or loved one is an extrovert or an introvert. And which are you? Signs of Isolation in Seniors Loneliness and isolation can have a devastating impact on one’s emotional well-being, physical health, and even length of life. The AARP Foundation lists four signs that a person may be isolated: How often do you feel unhappy doing so many things alone?

Add up the response to each question. How to Identify and Overcome Social Isolation in Seniors. Many Canadian seniors are socially isolated, meaning they have little contact with other people and few rewarding relationships. 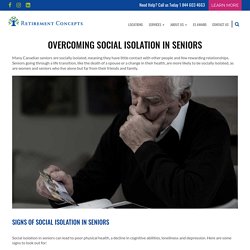 Seniors going through a life transition, like the death of a spouse or a change in their health, are more likely to be socially isolated, as are women and seniors who live alone but far from their friends and family. Signs of Social Isolation in Seniors Social isolation in seniors can lead to poor physical health, a decline in cognitive abilities, loneliness and depression.

Here are some signs to look out for: Neglecting personal hygieneHaving trouble sleeping, or sleeping more than usualA drastic change in weight and/or appetiteDeclining cognitive abilitiesLoss of interest in their hobbiesLoss of interest in socializing How to Overcome Social Isolation Connecting with others is sometimes easier said than done but taking steps to stay physically and mentally active creates many opportunities for socializing. Find Out Why We’re So Great to Come Home To. Causes of Social Isolation in Elderly Adults. No one likes to feel lonely or isolated, but for many seniors, it’s a feeling they know all too well. 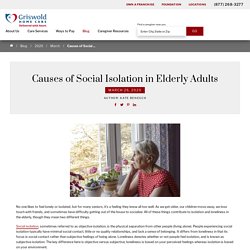 As we get older, our children move away, we lose touch with friends, and sometimes have difficulty getting out of the house to socialize. Social Isolation and the Elderly (75+) - Little BrothersLittle Brothers. “It is up to us as a society to ask ourselves how we can pull together to put an end to this isolation and reach out to our senior citizens.” — Caroline Sauriol, Executive Director of Little Brothers, in an interview with Marie-France Bazzo. 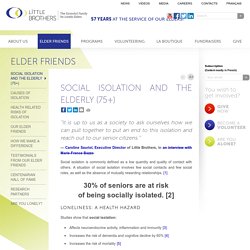 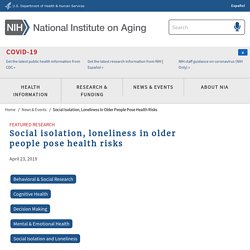 Our connection to others enables us to survive and thrive. Yet, as we age, many of us are alone more often than when we were younger, leaving us vulnerable to social isolation and loneliness—and related health problems such as cognitive decline, depression, and heart disease. Fortunately, there are ways to counteract these negative effects. Health impact of social isolation, loneliness on seniors.

Social isolation among seniors. Avoiding social isolation. Print People experience social isolation for a variety of reasons such as discrimination, lack of employment, being homeless or generally being in situations where they feel like their ideas and opinions are not valued. 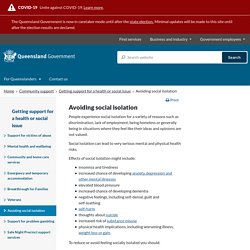 Social isolation can lead to very serious mental and physical health risks. Effects of social isolation might include: insomnia and tirednessincreased chance of developing anxiety, depression and other mental illnesseselevated blood pressureincreased chance of developing dementianegative feelings, including self-denial, guilt and self-loathingself-harmthoughts about suicideincreased risk of substance misusephysical health implications, including worsening illness, weight loss or gain. To reduce or avoid feeling socially isolated you should: Social Isolation and Loneliness in Older Adults: Opportunities for the Health Care System. Among older adults” (p. e37). 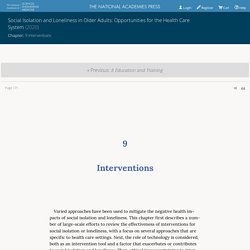 One of the most common and frequently examined social robots is PARO, a robotic baby harp seal, which has been tested in various settings with older adults with and without cognitive limitations (Jøranson et al., 2016; Liang et al., 2017; Robinson et al., 2013). Other examples include a robotic dog named AIBO (Banks et al., 2008), a humanoid communication robot called NAO (Soler et al., 2015), a humanoid robot designed to communicate and behave like a 3-year-old boy (Tanaka et al., 2012), and health care robots IrobiQ and Cafero (Broadbent et al., 2014).

Broader in concept than social robots, conversational agents are “systems that mimic human conversation using text or spoken language” (Laranjo et al., 2018, p. 1248). Conversational technologies involve the use of intuitive, natural language on the part of both the user and the system. Agents and agent-based systems refer to technologies that are capable of autonomous action.