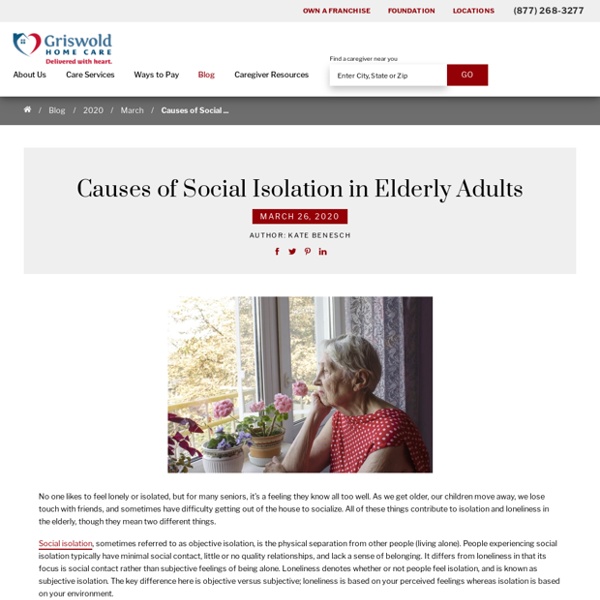 No one likes to feel lonely or isolated, but for many seniors, it’s a feeling they know all too well. As we get older, our children move away, we lose touch with friends, and sometimes have difficulty getting out of the house to socialize. All of these things contribute to isolation and loneliness in the elderly, though they mean two different things. Social isolation, sometimes referred to as objective isolation, is the physical separation from other people (living alone). People experiencing social isolation typically have minimal social contact, little or no quality relationships, and lack a sense of belonging. It differs from loneliness in that its focus is social contact rather than subjective feelings of being alone. People are considered to be isolated if they live alone, never go out of the house, have no close relatives, never visit anyone, have no contact with neighbors, have no phone, or are alone for more than 9 hours a day. Download a Free Guide to Home Care Summary

What is social isolation? Written by: No Isolation Last updated: June 5, 2020 Social isolation is a term often used interchangeably with loneliness, but while the two are closely related, they do not necessarily mean the same thing. You can be lonely in a crowd, but you will not be socially isolated. Isolation has been defined as an objective state whereby the number of contacts a person has can be counted, whereas loneliness is a subjective experience. While the terms may have slightly different meanings, both can be painful experiences and have a harmful impact on the individual.

Social isolation and the elderly poor in Singapore SINGAPORE: Her one-room flat was a cluttered mess, and Madam Helen Fernandez herself never seemed to bathe, said her neighbours who always saw her in the same set of clothes. When case workers first visited the unkempt and confused elderly widow, they had to rush her to hospital for very high blood pressure – which resulted because she hadn’t been taking her medication and had been missing doctors’ appointments. Since her husband died 17 years ago, Mdm Fernandez had been living alone with no friends or family – and slowly falling prey to loneliness and dementia. There were times when she’d even call up the police just to talk.

7 factors that could lead to social isolation Winter can be an especially solitary time for some seniors, who may find they are spending more time alone in their homes because of bad weather or lack of transportation. Canadian research shows that isolation isn’t just confined to the winter months for older adults: a recent federal government profile of social isolation estimated that 30 per cent of seniors are at risk of becoming socially isolated.* A report from the International Federation of Ageing also identified social isolation as one of the top issues facing Canada’s aging population.* What does it mean to be socially isolated? While researchers give us differing versions of a complex term, it’s generally agreed to include a low number and quality of contact with others, as well as a lack of rewarding relationships.

Stunning Facts About Senior Isolation Nearly one-third of all seniors live by themselves, according to the U.S. Census Bureau. That’s close to 13.8 million seniors aging alone. Social isolation, loneliness in older people pose health risks Human beings are social creatures. Our connection to others enables us to survive and thrive. Yet, as we age, many of us are alone more often than when we were younger, leaving us vulnerable to social isolation and loneliness—and related health problems such as cognitive decline, depression, and heart disease. Fortunately, there are ways to counteract these negative effects. NIA-supported researchers are studying the differences between social isolation and loneliness, their mechanisms and risk factors, and how to help people affected by these conditions.

Social Isolation and Loneliness in Older Adults: Opportunities for the Health Care System at the status of at-risk populations in other countries (e.g., Steptoe et al., 2013; Zebhauser et al., 2014), studies focusing on at-risk subpopulations in the United States are sparse. Two populations in the United States that have been researched more extensively than others are immigrants and individuals who identify as part of the gay, lesbian, bisexual, and transgender community. Research pertaining to these two groups is described below. Immigrants Evidence suggests that immigrants are more likely to experience social isolation and possibly loneliness than non-immigrants. For example, Latino immigrants have fewer social ties and lower levels of social integration than U.S.

Coronavirus: Elderly hit hard by social isolation amid circuit breaker measures, Health News A needle and the television set - these two objects have been keeping 83-year-old Nellie Woo company from morning to night for the past week while she is holed up alone at home. She used to enjoy playing bingo and exercising with her elderly neighbours at the Senior Activity Centre (SAC) downstairs, as well as chatting with volunteers who visited her studio flat. Now that all activities for seniors - including home visits - have ceased due to strict circuit breaker measures, Madam Woo is feeling lonely and emotionally down. Ways of Preventing Social Isolation Among Seniors As seniors age, their lives can become more isolated. Their families are no longer at home with them, and they may begin to isolate themselves from the outside world because it has become more difficult for them to get out. Social isolation among seniors can also impact their health. A study by the Proceedings of the National Academy of Sciences showed that seniors have a 26 percent higher death risk than the elderly that remain social.