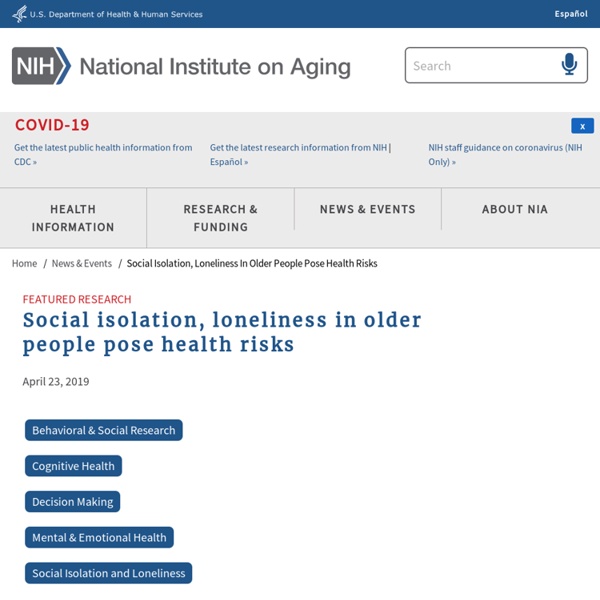 Health Effects of Social Isolation and Loneliness – Aging Life Care Association™ Clifford Singer, MD Adjunct Professor, University of Maine Chief, Geriatric Mental Health and Neuropsychiatry Acadia Hospital and Eastern Maine Medical Center 268 Stillwater Avenue Bangor Maine 04402 207.973.6179 csinger@emhs.org Cliff Singer is a geriatrician and psychiatrist. He lives in Orono, Maine and directs the Mood and Memory Clinic at Acadia Hospital and Alzheimer’s Disease Research Program for Acadia Hospital and Eastern Maine Medical Center in Bangor. He trained in general psychiatry and geriatric medicine at Oregon Health and Science University and served on the faculties of psychiatry and neurology there and at the University of Vermont before moving to Maine in 2010. Clifford Singer, MD ABSTRACT: Human beings are social animals and our biological, psychological, and social systems evolved to thrive in collaborative networks of people.

Causes of Social Isolation in Elderly Adults No one likes to feel lonely or isolated, but for many seniors, it’s a feeling they know all too well. As we get older, our children move away, we lose touch with friends, and sometimes have difficulty getting out of the house to socialize. All of these things contribute to isolation and loneliness in the elderly, though they mean two different things. Social isolation, sometimes referred to as objective isolation, is the physical separation from other people (living alone). People experiencing social isolation typically have minimal social contact, little or no quality relationships, and lack a sense of belonging. It differs from loneliness in that its focus is social contact rather than subjective feelings of being alone.

Coronavirus: Elderly hit hard by social isolation amid circuit breaker measures, Health News A needle and the television set - these two objects have been keeping 83-year-old Nellie Woo company from morning to night for the past week while she is holed up alone at home. She used to enjoy playing bingo and exercising with her elderly neighbours at the Senior Activity Centre (SAC) downstairs, as well as chatting with volunteers who visited her studio flat. Now that all activities for seniors - including home visits - have ceased due to strict circuit breaker measures, Madam Woo is feeling lonely and emotionally down. She thinks about suicide sometimes, and has spent so much time staring at her patchwork and TV lately that her doctor had to give her antibiotics for dry eyes. For such elderly people, the ills that come with social isolation pose a significant health risk, say some seniors and social workers. Out of the 208,000 people who live alone in Singapore, at least a quarter of them are elderly.

10 Ways to Help Seniors Deal with Isolation and Depression – DailyCaring Many seniors go through major life changes that could make them more vulnerable to depression. But it’s heartbreaking to stand by and watch someone deal with depression or loneliness on their own. Zara Lewis shares 10 ways you can help your older adult cope with symptoms and improve their quality of life. According to WHO estimates, depression affects about 350 million people of all ages worldwide. While coping with depression is tough, it’s even more difficult to watch an aging family member struggle with it. As my depressed mother-in-law’s caregiver, I’ve come up with a list of tips I wish to share with other caregivers to make it easier for them to help their older adult deal with isolation and depression.

Social isolation and loneliness among older adults in the context of COVID-19: a global challenge Social isolation is defined as the objective state of having few social relationships or infrequent social contact with others while loneliness is a subjective feeling of being isolated. Social isolation and loneliness are serious yet underestimated public health risks that affect a significant portion of the older adult population. In the U.S., approximately one-quarter of community-dwelling older adults are considered to be socially isolated, and 43% of them report feeling lonely [2]. The COVID-19 pandemic is increasing the number of older adults who are socially isolated including both community-dwelling older adults and nursing home residents, as many countries have issued stay-at-home orders and banned visits for nursing home residents.

14 Ways to Help Seniors Avoid Social Isolation - A vast body of evidence demonstrates the physical benefits of a healthy social life. Conversely, loneliness and social isolation have been clearly linked to poor health outcomes. Numerous studies have shown that socially isolated seniors even have a shorter life expectancy. “A Review of Social Isolation” by Nicholas R. Nicholson published in The Journal of Primary Prevention, is a definitive scholarly article on social isolation and a comprehensive “study of studies.” Its introduction observes bluntly that “social isolation has been demonstrated to lead to numerous detrimental health effects in older adults, including increased risk for all-cause mortality, dementia, increase risk for re-hospitalization, and an increased number of falls.”

How Social Interaction Plays a Principal Role in Dementia Dementia is an umbrella term for a progressive age-related disorder which is primarily seen in senior patients. It is associated with deterioration of the patients’ memory, cognition, behavior and a decline in their ability to perform activities of daily living. Alzheimer’s disease is the most common type of dementia that makes up nearly 70 percent of the cases. Ways of Preventing Social Isolation Among Seniors As seniors age, their lives can become more isolated. Their families are no longer at home with them, and they may begin to isolate themselves from the outside world because it has become more difficult for them to get out. Social isolation among seniors can also impact their health.

Helping The Elderly During This COVID-19 Circuit Breaker Season - Promises Healthcare Dr Rajesh Jacob (Senior Consultant Psychiatrist @ Promises Healthcare) was interviewed by Tamil Murasu on 19th April about his views on ways we can help the elderly during this COVID 19 Circuit Breaker season. Here’s an English translation of that interview: 1.What kind of mental issues that the elderly can experience during a pandemic like COVID 2019 Physical distancing during this public health crisis is essential in preventing the spread of the virus, but it can come at a high cost to seniors’ mental health and well-being, resulting in loneliness, anxiety, depression, and cognitive problems. Self-isolation will disproportionately affect elderly individuals whose only social contact is out of the home, such as at daycare venues, community centres, and places of worship. Those who do not have close family or friends, and rely on the support of voluntary services or social care, could be placed at additional risk, along with those who are already lonely, isolated, or secluded.

The loneliness of social isolation can affect your brain and raise dementia risk in older adults Physical pain is unpleasant, yet it’s vital for survival because it’s a warning that your body is in danger. It tells you to take your hand off a hot burner or to see a doctor about discomfort in your chest. Pain reminds us all that we need to take care of ourselves. Feeling lonely is the social equivalent to feeling physical pain. It even triggers the same pathways in the brain that are involved in processing emotional responses to physical pain. Just like feeling physical pain, feeling lonely and disconnected from others is also a signal that we need to take care of ourselves by seeking the safety and comfort of companionship.