The importance of cognitive abilities among older adults

Developmental Psychology explains the science behind one's physical, emotional and behavioural growth throughout his or her lifespan.

This particular study will be focusing on reasons why adults should stay active to maintain their cognitive abilities, and provide suggestions on feasible ways for them to do so. What Are Cognitive Skills? A Guide - Health, Brain and Neuroscience. The human brain is the center of cognition. 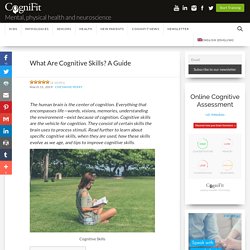 Everything that encompasses life—words, visions, memories, understanding the environment—exist because of cognition. Cognitive skills are the vehicle for cognition. They consist of certain skills the brain uses to process stimuli. Cognitive Aging: Progress in Understanding and Opportunities for Action. Paired decision making, which can reduce an individual’s ability to drive or increase the individual’s vulnerability to financial abuse or exploitation. 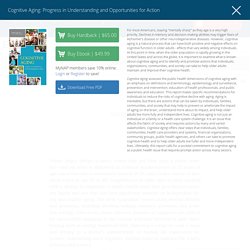 Cognitive impairment also affects society and the public’s quality of life. At this point in time, when the older population is rapidly growing in the United States and across the globe, it is important to carefully examine what is known about cognitive aging, to identify the positive steps that can be taken to maintain and improve cognitive health, and then to take action to implement those changes by informing and activating the public, the health sector, nonprofit and professional associations, the private sector, and government agencies. This Institute of Medicine (IOM) study examines cognitive aging, a natural process associated with advancing years. This report focuses on one aspect of health in older adults—cognitive health. Box S-1 provides the committee’s characterization of cognitive aging. Exploring Interventions to Reduce Cognitive Decline in Aging. Promoting cognitive health in older adults. We recently published an evidence-based resource to support local authorities, commissioners and providers to promote cognitive health in older adults aged 55 and above. 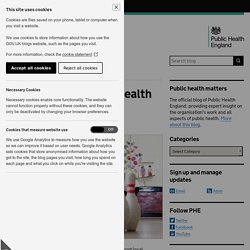 This is an important issue because, whilst the fact that people are living longer lives is a public health success story, we know that many of these extra years are spent in ill health or disability. Senior citizens need to understand Cognitive Aging – It’s not Alzheimer’s or dementia. Aging & Longevity Senior citizens need to understand Cognitive Aging – not Alzheimer’s or dementia New free report from Institute of Health is a good source for understanding the mental challenges of aging By Tucker Sutherland, editor-publisher, SeniorJournal.com. 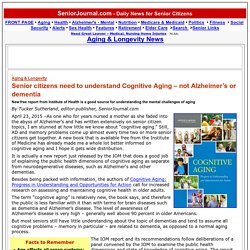 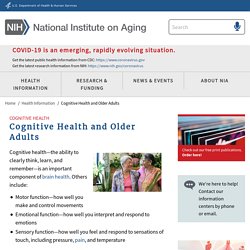 Others include: Exercising Your Brain into Old Age May Keep Memory Sharp. Keeping your brain busy from childhood into old age may help keep dementia and memory loss at bay, even for people who already have early signs of dementia, a new study says. 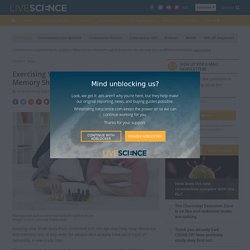 Mental exercises during both the grade-school years and late adulthood independently contributed to a slower mental decline in old age, according to the study. About one-third of cognitive decline in older adults could be explained by physical abnormalities in the brain, such as damage from stroke, or plaques of amyloid beta proteins linked to Alzheimer's disease, the study showed. But the amount of cognitive activity throughout a person's lifetime could explain an additional 10 percent of their cognitive decline, the researchers said. Age-Related Memory Loss. Worried about your forgetfulness? Learn what’s normal when it comes to memory and aging, and how to recognize the signs of more serious problems.

Memory and aging We’ve all misplaced keys, blanked on someone’s name, or forgotten a phone number. When you’re young, you don’t tend to pay much attention to these lapses, but as you grow older, you may worry about what they mean. Perhaps you start to talk about a movie you saw recently when you realize you can’t remember the title. As you grow older, you experience physiological changes that can cause glitches in brain functions you’ve always taken for granted. Age-related memory loss. How memory and thinking ability change with age. Scientists used to think that brain connections developed at a rapid pace in the first few years of life, until you reached your mental peak in your early 20s. 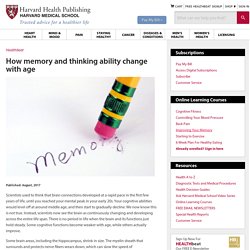 Your cognitive abilities would level off at around middle age, and then start to gradually decline. We now know this is not true. Instead, scientists now see the brain as continuously changing and developing across the entire life span. There is no period in life when the brain and its functions just hold steady. Some cognitive functions become weaker with age, while others actually improve. Some brain areas, including the hippocampus, shrink in size. Cognitive Skills and the Aging Brain: What to Expect. Every day we perform hundreds of cognitive tasks but are mostly unaware of the effort involved. 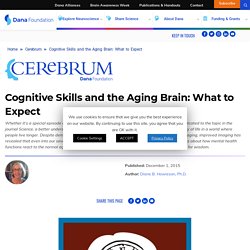 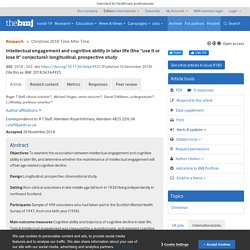 Design Longitudinal, prospective, observational study. Setting Non-clinical volunteers in late middle age (all born in 1936) living independently in northeast Scotland. Participants Sample of 498 volunteers who had taken part in the Scottish Mental Health Survey of 1947, from one birth year (1936). Use It or Lose It. Source: www.freepik.com In our book ‘Living with Mild Cognitive Impairment: A Guide to Maximizing Brain Health and Reducing Risk of Dementia’ and in a recent blog posting, the benefits of cognitive engagement for optimizing memory have been emphasized. 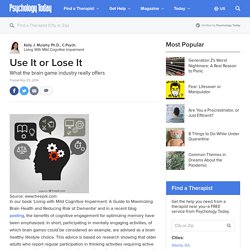 In short, participating in mentally engaging activities, of which brain games could be considered an example, are advised as a brain healthy lifestyle choice. This advice is based on research showing that older adults who report regular participation in thinking activities requiring active learning, problem solving, and decision making, often do better on tests of learning and memory as compared to peers who are less engaged in cognitively stimulating past-times. It is also based on research indicating a long-term effect of a cognitively engaged lifestyle is a lower chance of developing dementia. article continues after advertisement.

Use It or Lose It: The Principles of Brain Plasticity ... Dr. Mercola mercola.com It was once thought that any brain function lost was irretrievable. Today, research into what's referred to as "brain plasticity" has proven that this is not the case. Use it or lose it: Active learning improves cognitive learning in active adults. Older adults who learn a new, mentally demanding skill can improve their cognitive function, according to research by Jennifer Lodi-Smith, PhD, assistant professor of psychology at Canisius College. Lodi-Smith and her colleagues, including lead researcher Denise Park of the University of Texas at Dallas' Center for Vital Longevity, randomly assigned 221 adults, ages 60-90, to engage in a particular type of activity for 15 hours a week over the course of three months. Some participants were assigned to learn a new skill -- digital photography, quilting, or both − which required active engagement and tapped working memory, long-term memory and other high-level cognitive processes.

The study took place from 2009-2011. "At the end of three months, we found that only the group who learned digital photography grew in their memory skills," says Lodi-Smith. Use it or Lose it? Wii Brain Exercise Practice and Reading for Domain Knowledge. SOCIAL ENGAGEMENT AND COGNITIVE FUNCTION IN OLD AGE. Aging Well. Staying healthy and feeling your best is important at any age. These tips can help you cope with change and live life to the fullest. How to Stay Socially Engaged as You Age.

Looking for that ever-elusive fountain of youth? Look no further. There are many things you can do to stay vital and healthy as you get older — such as exercising regularly and eating a healthful diet — but experts now believe that one of the best ways to age gracefully is to engage in a little social networking, both online and off. The Benefits of Staying Engaged. Importance of Social Activities for Seniors. Want to add more life to your years? Social connections ... When we’re young, we expect to live forever. It’s easy to stay focused on the present and avoid thinking about a reality that we all inevitably face – aging.

Older Adults' Health and Age-Related Changes. Senior Exercise and Fitness Tips. No matter your age, it’s never too late to get fit. These easy tips will help you get started safely and make it fun. Physical Activity Improves Cognitive Function. Source: This week, two studies were released showing that physical activity done today can benefit cognitive function for decades down the road. 10 Reasons Why Seniors Should Be Active - NWPC. Healthy ageing - stay mentally active. Perceptions and Beliefs About the Role of Physical Activity and Nutrition on Brain Health in Older Adults.

We use cookies to enhance your experience on our website.By continuing to use our website, you are agreeing to our use of cookies. You can change your cookie settings at any time. <a href=" Find out more</a> For older adults, a better diet may prevent brain shrinkage. How to reduce the risk of cognitive decline with age. Research into how we can keep our brains healthy as we age has gained momentum in recent years. There is now an increased focus on the changes that we can makes to our health and lifestyle, which may prevent dementia. Here are some things that research has shown reduce a person’s risk of cognitive decline with age. Sex Our latest study shows that having more sex is associated with better cognitive function. 5 Benefits of Exercise for Seniors and Aging Adults. How Exercise Helps Protect Your Brain From Cognitive Decline. 9 Nutrients Older Adults Need for Nutrition and Health. Healthy eating for older adults.