Health impact of social isolation, loneliness on seniors. How isolation affects seniors during COVID-19. COVID-19 and the consequences of isolating the elderly - The Lancet Public Health. As countries are affected by coronavirus disease 2019 (COVID-19), the elderly population will soon be told to self-isolate for “a very long time” in the UK, and elsewhere. 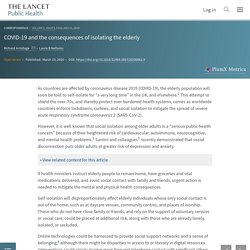 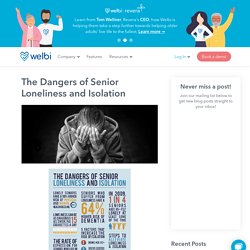 For seniors, loneliness can be as large of a health risk as obesity, smoking, or alcoholism. Senior loneliness and isolation are not issues that should be ignored or taken lightly. A Statistics Canada study from 2009 showed that around 20% of seniors aged 65 and older felt lonely at least some of the time. For seniors aged 85 and older, this figure was 25%. This is a problem that gets worse with age, and it can have major negative consequences. Loneliness vs. A distinction should be made between loneliness and isolation, as they are not the same. Loneliness in Seniors: The Impact of Social Isolation on our Brains. 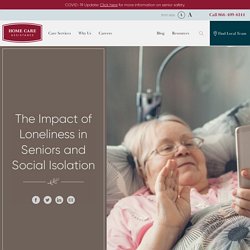 Yes, it’s true — feeling alone is no fun. But the fact remains that many American seniors spend most of their lives lonely and isolated from the outside world. Sure, everyone enjoys a little alone time. However, for too many seniors, remaining isolated does more than diminish one’s zest for life. It can increase the risk of disease — and may even precipitate an early death. The Science Behind Excess Alone Time on Senior Brains According to the Pew Research Center, over 27% of people over the age of 60 live alone. According to AARP survey results, 1 in 3 adults say they lack regular companionship, and 1 in 4 say they feel isolated from other people at least some of the time. A Clear Connection to Senior Health Issues Conquering Isolation Get moving. How Loneliness Affects the Elderly. Loneliness is a surprising epidemic that affects millions of people. 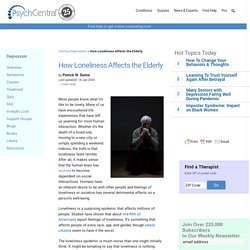 Studies have shown that about one-fifth of Americans report feelings of loneliness. It’s something that affects people of every race, age, and gender, though senior citizens seem to have it the worst. The loneliness epidemic is much worse than one might initially think. It might be tempting to say that loneliness is nothing more than a feeling, but researchers have found that it can be deadlier than obesity. (To be specific, lonely people have a 50% greater mortality rate than non-lonely people whereas obese people have an 18% greater mortality rate than non-obese people.) One study from Jama International Medicine observed the lifestyles and habits of about 45,000 people over a four year period. In a follow-up study, researchers looked at how loneliness affects people age 60 and up over a six year period. Another major reason loneliness can be deadly is the way that it affects your immune system.

Related Articles. Stunning Facts About Senior Isolation. Nearly one-third of all seniors live by themselves, according to the U.S. 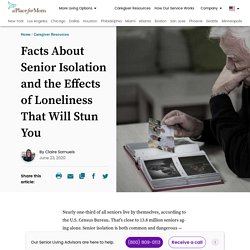 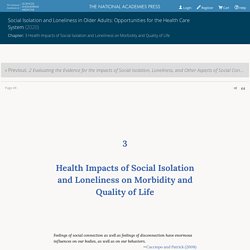 Assessed loneliness at baseline was found to correspond with the rate of motor function decline, with a higher assessed loneliness at baseline resulting in more rapid rates of motor function decline. (See Chapter 4 for information regarding risk factors associated with frailty in older adults.) Several aspects of the structural and functional characteristics of social connection have been associated with newly and previously diagnosed type 2 diabetes mellitus (T2DM).

One study found that individuals with a smaller social network size were more likely to have newly diagnosed and previously diagnosed T2DM; no such relationship was found for pre-diabetes (Brinkhues et al., 2017). Loneliness may also have a reciprocal relationship with diabetic outcomes. Social connections even appear to influence susceptibility to colds. The loneliness of social isolation can affect your brain and raise dementia risk in older adults. Physical pain is unpleasant, yet it’s vital for survival because it’s a warning that your body is in danger.

As scholars at the Center for Healthy Aging at Penn State, we study the impact of stress on the aging body and brain, including how it can worsen cognitive decline and risk for dementia.