Effects of social isolation for seniors

Welcome to our eldercare services sharing session!
Who were at risk for the negative effects of social isolation?

Social isolation and the elderly poor in Singapore. SINGAPORE: Her one-room flat was a cluttered mess, and Madam Helen Fernandez herself never seemed to bathe, said her neighbours who always saw her in the same set of clothes. When case workers first visited the unkempt and confused elderly widow, they had to rush her to hospital for very high blood pressure – which resulted because she hadn’t been taking her medication and had been missing doctors’ appointments. Since her husband died 17 years ago, Mdm Fernandez had been living alone with no friends or family – and slowly falling prey to loneliness and dementia. There were times when she’d even call up the police just to talk. Coronavirus: Elderly hit hard by social isolation amid circuit breaker measures, Health News.

A needle and the television set - these two objects have been keeping 83-year-old Nellie Woo company from morning to night for the past week while she is holed up alone at home. She used to enjoy playing bingo and exercising with her elderly neighbours at the Senior Activity Centre (SAC) downstairs, as well as chatting with volunteers who visited her studio flat. Now that all activities for seniors - including home visits - have ceased due to strict circuit breaker measures, Madam Woo is feeling lonely and emotionally down. She thinks about suicide sometimes, and has spent so much time staring at her patchwork and TV lately that her doctor had to give her antibiotics for dry eyes. For such elderly people, the ills that come with social isolation pose a significant health risk, say some seniors and social workers. Out of the 208,000 people who live alone in Singapore, at least a quarter of them are elderly.

​Ms Linda Loh joined exercise classes to combat loneliness when her grown-up children moved out of the family home. 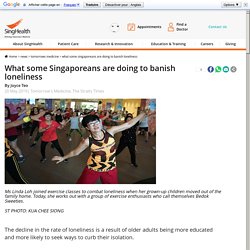 Today, she works out with a group of exercise enthusiasts who call themselves Bedok Sweeties. The decline in the rate of loneliness is a result of older adults being more educated and more likely to seek ways to curb their isolation. Free social activities for seniors. How gardening is being used to tackle loneliness in Singapore. By Beh Lih Yi SINGAPORE, July 22 (Thomson Reuters Foundation) - Since her mother died last year, 74-year-old Lim Yeo Hong has been living alone in a flat on the outskirts of Singapore, scavenging for cardboard scraps which she sells for a living. 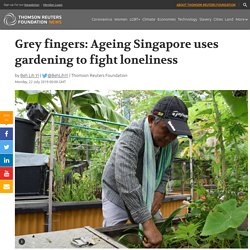 The only time she meets anyone is once a month when she collects food from a charity. "There's nothing else I can do at home, I watch TV," the frail woman told the Thomson Reuters Foundation, taking a break from pushing her cart full of cardboard around an industrial estate on the 5.6 million-strong island nation. Asked if she felt lonely, she said, "Yes of course I do, but what choice do I have? " Making friends & Sharing passion. 63-year old retiree pursues second career.

At age 63, Mr Gabriel Gan swapped his flight attendant uniform for a set of chef’s whites. 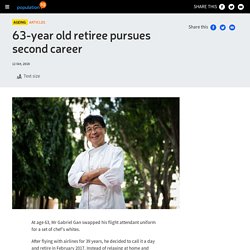 After flying with airlines for 39 years, he decided to call it a day and retire in February 2017. Instead of relaxing at home and taking life easy, the retiree chose to return to school to pursue his other passion. Today, he is pursuing a six-month internship at a commercial kitchen, as part of an 18-month diploma programme in culinary arts at At-Sunrice GlobalChef Academy. While one might think that an internship may be less taxing than a regular job, Mr Gan’s job switch has him working longer hours. “I told my colleagues that in all my years of working, I’ve never worked a six-day week. This 80-year-old woman makes history as university's oldest graduate: ‘Age is not a barrier’ When it comes to chasing your dreams, it’s never too late to achieve them -- and for one Alabama woman, that means never giving up on graduating from college. 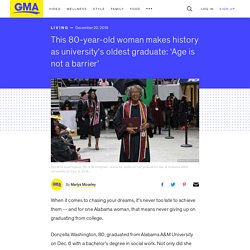 Donzella Washington, 80, graduated from Alabama A&M University on Dec. 6 with a bachelor’s degree in social work. At 70, he has 5 diplomas, 3 bachelor's, 1 master's, Latest Singapore News. This article is more than 12 months old He may be 70 years old, but his thirst for knowledge is unquenchable. Yesterday, adjunct lecturer Johnnie Chia Swee Hock added a diploma in Digital Advertising Technology and Analytics from Temasek Polytechnic to his list of academic achievements.

He became the oldest-ever student to graduate from the poly, says Temasek Polytechnic. The inspirational lifelong learner boasts a master's degree in Social Sciences (Economics), three bachelor's degrees and five diplomas. He had started out with a Bachelor of Arts (Economic and Philosophy) in 1971 and added two more accounting-related degrees along the way, as well as an Association of Chartered Certified Accountants professional accounting qualification.

Mr Chia also has diplomas and certificates in a variety of fields ranging from computing to food hygiene. He has taught there since 2001. He also uses the knowledge gleaned from his diploma to help his friends improve their website traffic. Renewing life purpose and regaining competence. More seniors adopting technology. Still lost: Seniors shunning technology. How to keep loneliness at bay for the elderly during Covid-19, Latest Health News. The elderly, being one of the most vulnerable population groups, have been strongly advised to continue to stay home and avoid crowded places and large group gatherings due to the Covid-19 situation. However, long-term social isolation and loneliness have shown to be risk factors for various conditions including dementia, based on the findings of previous studies. As much as it is important to prevent the elderly from contracting the virus, their mental well-being is also vital. With the lifting of the circuit breaker measures on June 2, visiting of parents and grandparents is allowed.

Here are some activities and ideas to meaningfully engage the elderly in your family during a visit, or even virtually when you are unable to do so in person. Recollection of memories together Family members can do an interesting reminiscence activity with their elderly parents or grandparents. Some resources include www.singaporememory.sg and the My House of Memories app. Watch movies together. Exploring the virtual world. Promoting Active Ageing through Virtual & Augmented Reality. Human beings have long desired to live longer, and now our advances have made this dream possible. 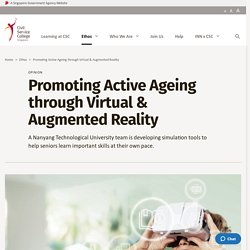 However, greater life expectancy comes with a price. As the elderly population in our societies rise, we are seeing attendant challenges such as social isolation, loneliness, and increased depression rates among the elderly. Social counsellors have identified several reasons for this trend, including a lost sense of purpose in life, a lack of confidence in dealing with their own decline, and the refusal to be a burden to others.1 Almost a third of the elderly have reported experiencing loneliness.

Perhaps more important than how long we live, is how well we live. Virtual reality & augmented reality learning system. Smart, Assistive Technology for the Elderly and Caregivers. In Singapore, the number of senior citizens aged 65 and above is expected to reach 900,000 by 2030. 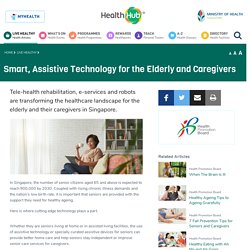 Coupled with rising chronic illness demands and the nation’s low birth rate, it is important that seniors are provided with the support they need for healthy ageing. Here is where cutting edge technology plays a part. Whether they are seniors living at home or in assisted living facilities, the use of assistive technology or specially curated assistive devices for seniors can provide better home care and help seniors stay independent or improve senior care services for caregivers. Instead of alienating seniors, healthcare digital transformation can provide them and caregivers with support. SG Smart Nation Initiative. Seniors Go Digital.