Social isolation is defined as the absence of social interactions, contacts, and relationships with the individual's social groups such as family, friends, relatives, neighbors, etc.

Denoting the absence of this meaningful relationship, social isolation could cause various risk factors in older individual's, namely the elderly (Berg & Vassells, 1990). Let us take a look at the effects of social isolation on the elderly's development.

Social relationships are imperative to human wellbeing and are critically involved in health maintenance. Individuals who have satisfying relationships with their social groups are happier and have less health challenges. On the contrary, a lack of social connections is linked with depression and later-life cognitive decline (Olufemi, 2017). It is also challenging to distinguish social isolation and loneliness from one another; as not all who are isolated are lonely and not all who are lonely are alone. 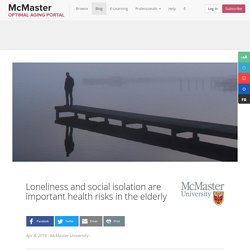 Recently, these issues have also been gaining increased attention from policymakers and the media. In Canada, the National Council of Seniors declared social isolation among seniors as its priority area for 2013-14. In the United Kingdom, the “Campaign to End Loneliness” is tackling loneliness by disseminating research knowledge and providing service organizations with information on how to approach the issue. CBC Headlines like “One is the loneliness number”1 have brought these issues to the attention of the general public.

As scholars at the Center for Healthy Aging at Penn State, we study the impact of stress on the aging body and brain, including how it can worsen cognitive decline and risk for dementia. The health consequences of loneliness The COVID-19 pandemic has put many older adults’ social lives on hold, leaving them at greater risk for loneliness. Channel NewsAsia. Social isolation and the elderly poor in Singapore. SINGAPORE: Her one-room flat was a cluttered mess, and Madam Helen Fernandez herself never seemed to bathe, said her neighbours who always saw her in the same set of clothes. When case workers first visited the unkempt and confused elderly widow, they had to rush her to hospital for very high blood pressure – which resulted because she hadn’t been taking her medication and had been missing doctors’ appointments.

Since her husband died 17 years ago, Mdm Fernandez had been living alone with no friends or family – and slowly falling prey to loneliness and dementia. There were times when she’d even call up the police just to talk. It was how her case got referred to the Social Service Office, and then to case worker Ahmala Rajoo in 2015. “She was receiving financial assistance, about S$500 a month,” said Ms Ahmala, a care executive with NTUC Health Cluster Support in Bukit Merah. But the neatly-groomed Mdm Fernandez you meet today almost doesn’t seem the same person. “Her memory has worsened. Old and home alone in Singapore, Singapore News & Top Stories The Straits Time. 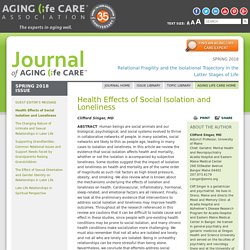 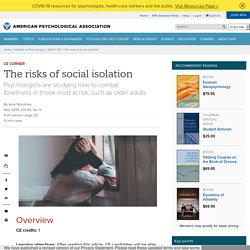 For more information on earning CE credit for this article, go to www.apa.org/ed/ce/resources/ce-corner.aspx. According to a 2018 national survey by Cigna, loneliness levels have reached an all-time high, with nearly half of 20,000 U.S. adults reporting they sometimes or always feel alone. Such numbers are alarming because of the health and mental health risks associated with loneliness. Social isolation results in memory loss in later life. Social isolation contributes to memory loss in older age, research by LSE's Care and Evaluation Centre has shown for the first time. 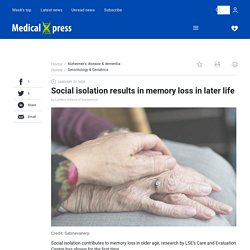 The paper, published in Journals of Gerontology, found that both men and women were affected, but in different ways. Men with high levels of social isolation experienced subsequent memory decline. For women it was not the overall level of lack of social contact, but rather increases in isolation that were important. Researchers studied data from 6123 women and 5110 men over the age of 50, from the English Longitudinal Study of Ageing (ELSA), over six two year intervals from 2002.

By using a statistical model to analyze the changes in levels of social isolation and memory loss over time, they were able to establish that isolation precedes memory loss—rather than the other way around. Dr. For women it was more relative—when isolation increased by two points, women's memory declined, on average by 18 percent over the next two years.

How Social Isolation Affects the Brain. Daisy Fancourt was at her home in Surrey in southeast England when the UK government formally announced a nationwide lockdown.

Speaking in a televised address on March 23, UK Prime Minister Boris Johnson laid out a suite of measures designed to curb the spread of COVID-19, including closing public spaces and requiring people to stay home except for exercise and essential tasks. For Fancourt, an epidemiologist at University College London (UCL), the announcement meant more than just a change to her daily life. It was the starting gun for a huge study, weeks in the planning, that would investigate the effects of enforced isolation and other pandemic-associated changes on the British public. We’re a social species.

We really need others to survive. Impact of social relationships on Alzheimer’s memory impairment: mechanistic studies. Effects of social isolation, loneliness and frailty on health outcomes and their possible mediators and moderators in community-dwelling older adults: A scoping review. Arksey and O’Malley, 2005 H. 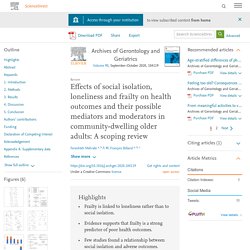