According to the Singapore Mental Health Study (SMHS) (2016), psychological disorders in Singapore is on the rise. Raising awareness of these mental disorders is crucial to prepare the nation to face the situation.

Knowledge of the symptoms, treatments and the institutional support available would provide anyone who might be having a mental disorder to seek help earlier and clarify any misconceptions.

A supportive and well-informed community helps build a more caring society as the citizens are more aware of the stigmas faced by persons with mental disorders.

These videos by Institute of Mental Health bring us closer to understand persons with mental disorder. As fellow countrymen, we have a shared responsibility to create an inclusive society for everyone.

From Ward To Gallery: The Artist With Schizophrenia. The Story of Ai Leng. 6 common mental disorders affecting Singaporeans today and where you can go to get help, Business Insider - Business Insider Singapore. Pexels There’s been an increase in the number of Singapore adults who have suffered from a mental disorder in their lifetimes, the Institute of Mental Health (IMH) said recently.

According to a 2016 study, one in seven people in Singapore have experienced specific mood, anxiety, or alcohol use disorders in their lifetime, up from roughly one in eight six years prior. Depression. WE CARE Community Services : Alcohol Addiction. Do you continue to drink when it causes you problems? What you should be aware of when you drink Alcohol is often used as a social lubricant in social settings. Drinking is legal in Singapore if you are 18 and above. Even though alcohol is legal and socially accepted, there are risks and problems associated with persistent drinking. Risky Drinking When you are intoxicated, you put yourself and others at some risk.

Moreover, the ability to manage your emotions and behaviour is compromised. Binge Drinking Binge drinking is defined as 4 or more standard alcoholic drinks* on one occasion for women, and 5 or more for men. When you do not need to drink every day, you may think you do not have a drinking problem. *A standard alcoholic drink contains 10 gm of alcohol. Obsessive-Compulsive Disorder. Obsessions are defined as recurrent, persistent ideas, images or impulses. Compulsions are an attempt to reduce the anxiety caused by the obsession. Compulsive behaviour may be physical or mental acts that are repetitive and purposeful, and performed in response to an obsession.

Individuals with OCD may have co-morbid depression. To watch videos on other common conditions, click here. Signs and Symptoms Common obsessions include: Institute of Mental Health. Alcohol Abuse Support. Whether it is binge drinking, smoking, drug or solvent abuse, you do not need to be a lone ranger in the fight against addiction. 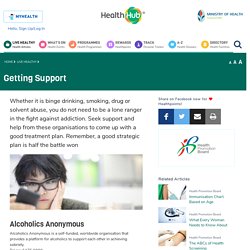 Seek support and help from these organisations to come up with a good treatment plan. Remember, a good strategic plan is half the battle won <div class="ExternalClass2FD74442A00E4B45B722792E3A2F5BF3"><h2>Alcoholics Anonymous</h2><div>Alcoholics Anonymous is a self-funded, worldwide organisation that provides a platform for alcoholics to support each other in achieving sobriety. </div><div>Tel no&#58; 6475 0890</div><div>Address&#58; 1 Commonwealth Drive, Singapore 149603</div><div>Email&#58; help@singaporeaa.org</div><div>Website&#58; <a href="http&#58;//www.singaporeaa.org/" rel="nofollow">http&#58;//www.singaporeaa.org</a></div><div> </div><h2>Al-Anon family groups</h2><div>The Al-Anon Family Groups offers help and support to families and friends of alcoholics. 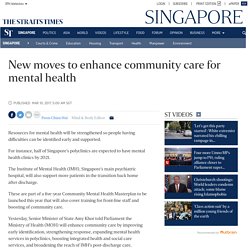 For instance, half of Singapore's polyclinics are expected to have mental health clinics by 2021. The Institute of Mental Health (IMH), Singapore's main psychiatric hospital, will also support more patients in the transition back home after discharge. These are part of a five-year Community Mental Health Masterplan to be launched this year that will also cover training for front-line staff and boosting of community care. Yesterday, Senior Minister of State Amy Khor told Parliament the Ministry of Health (MOH) will enhance community care by improving early identification, strengthening response, expanding mental health services in polyclinics, boosting integrated health and social care services, and broadening the reach of IMH's post-discharge care. Dr Khor said the number of community outreach teams will also go up from 18 to 50 by 2021.

SPEECH BY MINISTER FOR HEALTH AT SINGAPORE MENTAL HEALTH CONFERENCE 17 OCT 2014 Final. Coping with depression. Everyone has felt sad at one time or another. Usually it is due to a disappointment, frustration or losing someone. Such sadness is normal. Time heals, the mood lifts and people continue to get on with their lives. Stigma towards mental health disorder. Many still steer clear of people with mental illness: Poll, Singapore News. Even as more people are seeking outpatient treatment at the Institute of Mental Health (IMH), more than five in 10 respondents in a recent survey indicated they are unwilling to live with, live nearby or work with a person with a mental health condition.

The survey, which is the first of its kind by the National Council of Social Service (NCSS), found that most people agree that more needs to be done to reduce societal stigma, yet they are also reluctant to accept them on an individual level. Stop the Stigma. ‘Crazy, weird, scary’: Survey unveils negative labels youths associate with mental illness. SINGAPORE — Researchers have called for regular and compulsory education on mental health for youths, in the wake of a study that found a large proportion of this group having misconceptions of mental illness.

Almost half (44.5 per cent) of 940 teenage students polled attached negative and pejorative labels to people with mental illness. “Crazy”, “weird”, “scary”, “stupid” and “dangerous” were among the words that came to mind then the respondents heard the term “mental illness”, reported the study, which was presented at the Frontiers in Mental Health symposium organised by the Institute of Mental Health (IMH) and Nanyang Technological University’s Lee Kong Chian School of Medicine on Tuesday (March 6).

Some 46.2 per cent of the respondents, who were aged between 14 and 18, also said they would be “very embarrassed” if they were diagnosed with a mental illness, while nearly a quarter (22.7 per cent) said they would not want others to know if their relative were mentally ill. Support for Individuals and Caregivers. Support for Individuals and Caregivers As an individual living with a mental illness, social inclusion plays a central role in recovery. However, the lack of understanding about mental illness, compounded by the negative portrayals of the mentally ill in the media, often adds to the marginalisation of this misunderstood group.

Without acceptance from the community, people with mental illness often face discrimination, lack social support, and find themselves isolated. It is therefore important to build the emotional resilience and find pillars of support at home, at work and in the community. As a caregiver, one may experience various issues and problems in caring for his loved one who has mental illness. Read about Madam Wee's plight when she cared for her 80-year-old husband who had anxiety disorder and depression. The following helplines manned by key partner organisations will help both individuals and caregivers find further assistance in the community.

A Handbook for Caregivers on Depression. Caregiver Support Groups in Singapore. Engulfed by Depression - A Story on Depression. Worried Sick - All About Generalised Anxiety Disorder. Gotta Get It Right - Struggle with Obsessive Compulsive Disorder.

I Hear Voices - A Story on Schizophrenia. A Social Experiment on Mental Health Stigma.