Want to find out more about the effects of social isolation on elderly's development in Singapore context?

Read more for the facts, statistics, social isolation effects, and where to find help

Home alone older adults in singapore. Old and home alone in Singapore, Singapore News. Longevity is bittersweet for Madam Ng Poh Choo. At 83, Madam Ng, who used to serve drinks at a coffee shop, has outlived three older brothers who died of cancer or old age. The single woman has been living alone in a one-room rental flat in Bukit Merah for the last 13 years. "I do get lonely and I can't remember my friends' numbers to call, so I don't have a choice," she said. Social workers found her lonely and depressed three years ago and referred her to an eldercare centre nearby for activities. Madam Ng is among a rapidly growing group of elderly folk here who live alone. The elderly make up about a third of all one-person households here. Sociologists interviewed said such solo elderly households are more prevalent now due to factors such as an ageing population and changing family structures resulting from a low birth rate, rising divorce rate and estranged familial relations.

"Current infrastructure and resources are clearly not adequate to meet the demand. " Social isolation and the elderly poor in Singapore. SINGAPORE: Her one-room flat was a cluttered mess, and Madam Helen Fernandez herself never seemed to bathe, said her neighbours who always saw her in the same set of clothes. When case workers first visited the unkempt and confused elderly widow, they had to rush her to hospital for very high blood pressure – which resulted because she hadn’t been taking her medication and had been missing doctors’ appointments.

Since her husband died 17 years ago, Mdm Fernandez had been living alone with no friends or family – and slowly falling prey to loneliness and dementia. There were times when she’d even call up the police just to talk. It was how her case got referred to the Social Service Office, and then to case worker Ahmala Rajoo in 2015. “She was receiving financial assistance, about S$500 a month,” said Ms Ahmala, a care executive with NTUC Health Cluster Support in Bukit Merah. But the neatly-groomed Mdm Fernandez you meet today almost doesn’t seem the same person. 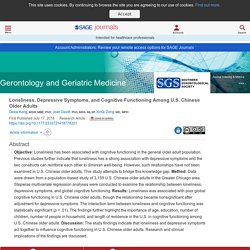 It is estimated that the age-specific prevalence of cognitive impairment among Asian Americans is comparable with that of the general U.S. older adult population (J. C. Chen, Borson, & Scanlan, 2000; Manly & Mayeux, 2004). Older Chinese adults represent one of the largest and fastest growing older Asian American subgroups (Hoeffel, Rastogi, Kim, & Hasan, 2012). Importance of Hypertension and Social Isolation in Causing Sleep Disruption in Dementia. Introduction Approximately one-fourth of the adults with dementia1 including 40% of patients with Alzheimer’s disease2 report sleep disturbances. 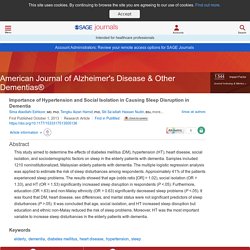 Although sleep problems cause much burden to people and society, mostly (80%-90%) they remain undiagnosed.3 Sleep quality is associated with accidents, mental problems, cardiovascular diseases,3 cognitive impairments, executive functions,2 and quality of life.3 It has been established that sleep disruption can cause hypertension (HT),4 diabetes mellitus (DM),3 and heart disease.5 The DM is an age-related chronic disease6 associated with glucose intolerance. Methodology The project was registered in the National Medical Research Register (Project Code: NMRR-09-443-4148). Approval and permission for conducting the study were received from the Ethical Committee of the Ministry of Health. Statistical Analysis Results Analysis was run on data collected from 1210 respondents who were the Malaysian elderly patients with dementia.

Table 1. The Benefits of Social Technology Use Among Older Adults Are Mediated by Reduced Loneliness. Security of Attachment to Spouses in Late Life: Concurrent and Prospective Links With Cognitive and Emotional Well-Being. Loneliness and Social Isolation as Risk Factors for Mortality: A Meta-Analytic Review. Looking Out For The Silver Generation. 'Like a knife poking my heart': Loss, loneliness and the killing pain of elderly depression.

SINGAPORE: Linda Loh remembers a time when her 85-year-old mother used to be a “very nice person”. As the tantrums began, at first the family put this down to Mdm Lee Sui Yee’s old age – but then, nothing seemed acceptable to her. “I’d talk to her, but she’d say that I never listen to her,” said her daughter. “I’d try to cool myself down … just walk into the kitchen and stay away from her. Loneliness amongst Low-Socioeconomic Status Elderly Singaporeans and its Association with Perceptions of the Neighbourhood Environment. Health impacts on social isolation and loneliness in older adults. The buffering effect of tangible social support on financial stress: influence on psychological well-being and psychosomatic symptoms in a large sample of the adult general population. Study design, population and procedure This was a cross-sectional study. 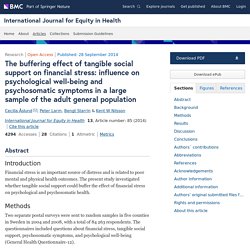 Postal surveys are distributed every four years by the county councils in the five Swedish counties of Uppsala, Sörmland, Västmanland, Värmland, and Örebro, in order to monitor the psychosocial health of the population. In total, the five counties comprise about 1 400 000 inhabitants. The present study involves data from one survey that was distributed during September to November 2004, and one survey that was distributed during March to May 2008.

Random samples of 68 460 people for the 2004 survey and 68 710 for the 2008 survey, aged 18-84 years and stratified by sex, age, and city (and parts of the city for larger cities), were drawn from the total population by Statistics Sweden. The study followed the Swedish guidelines for studies of social sciences and humanities according to the Declaration of Helsinki. Measures Demographic data Sex was categorised as (1) male and (2) female. Year of survey Financial stress 1. Seniors felt less socially satisfied, more isolated during Covid-19 circuit breaker period: Survey, Singapore News. SINGAPORE - Social isolation during the circuit breaker period resulted in lower social satisfaction levels for senior citizens, according to results from a monthly survey of about 7,500 people aged between 55 and 75 here.

The loneliness of old age - and an experiment to see if Instagram can be a cure. SINGAPORE: One by one, her family and friends had died or disappeared, leaving her alone. 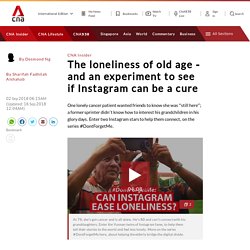 Isolated, Madam Wong Sok Ying could go for days without human contact, holed up most of the day in her one-room rental flat sparsely furnished with an arm chair, single bed, wardrobe, table and little else. “The TV is my best friend. No TV, I cannot pass the day. (I’d be) so lonely,” she said with a wry smile. “The radio is my friend, the newspaper is my friend. It is not as if she’s hungry for visitors. But there’s a grimmer reason behind her reluctance to socialise. Physical and Mental Health Effects of Family Caregiving. Battling with stress while taking care of the elderly. Coronavirus: Vulnerable seniors being supported during circuit breaker, Singapore News. Seniors in need are continuing to receive help as social service agencies and volunteer networks providing essential aid remain active during the circuit breaker period. Vulnerable elderly is supported during the circuit breaker period.

Helplines in Singapore. Successful Ageing in Singapore. Interventions targeting social isolation in older people: A systematic review. Study selection Of the 7067 studies identified, 6930 did not meet the selection criteria. 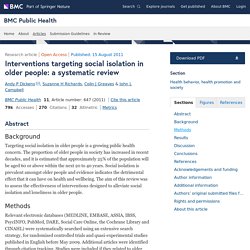 Full papers were obtained for 137 studies. After application of the study inclusion criteria, 32 studies were deemed eligible for inclusion (Figure 1). Eligibility and screening of papers considered for the systematic review. Description of included studies. TODAYonline. SINGAPORE — After moving into Kampung Admiralty in Woodlands last November, Mr Robert Koh has been interacting more with his neighbours, who are all seniors like him. 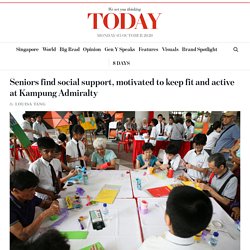 The 70-year-old also exercises twice a week at the NTUC Health Active Ageing Hub, and enjoys the events held frequently at the community plaza on the ground floor of his public housing block. He and his wife used to live with their daughter and her family nearby, but now that they have a place of their own, they still get to spend time with their granddaughter, who goes to the childcare centre operated by My First Skool in Kampung Admiralty. Mr Koh picks the girl up in the afternoons and takes care of her till her parents are done with work.

“There are many activities here for us to keep busy,” the retiree told TODAY. Action plan for ageing population in Sg. What the Action Plan is about.