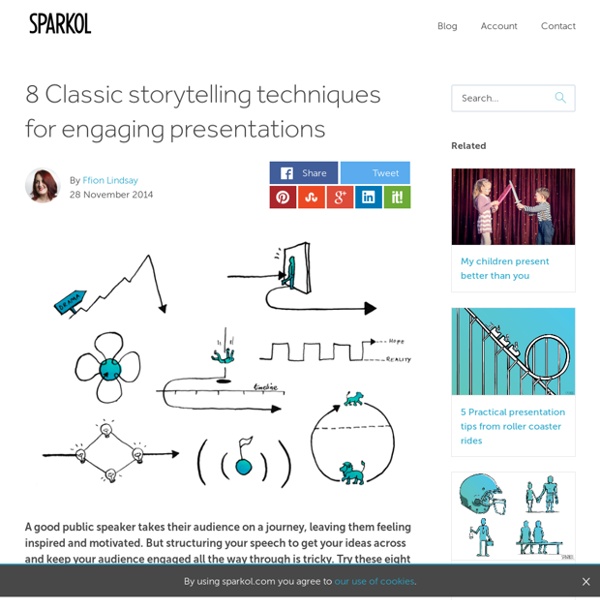 A good public speaker takes their audience on a journey, leaving them feeling inspired and motivated. But structuring your speech to get your ideas across and keep your audience engaged all the way through is tricky. Try these eight storytelling techniques for a presentation that wows. You’re doing a presentation, so you start with the facts you want to get across. Wrong! Humans are hardwired for stories. Deliver a presentation that captures the hearts and heads of your audience by stealing one of these classic storytelling techniques. 1. The monomyth (also called the hero’s journey), is a story structure that is found in many folk tales, myths and religious writings from around the world. In a monomyth, the hero is called to leave their home and sets out on a difficult journey. After overcoming a great trial, they return home with a reward or newfound wisdom – something which will help their community. Good for: See also: The Hero’s Journey by Joseph Campbell 2. 3. 4. 5. 6. 7. 8.

Strategies in Visual Narrative Strategies in Visual Narrative ©Werner Hammerstingl 1998,1999 Narrative 1. 8 Classic Storytelling Techniques for Engaging Presentations Via Sparkol.com This post appeared on Sparkle.com on November 28 2014 and was written by Ffion Lindsay. This is an excerpt from the full article, and is reprinted here with permission. Read the full article here. Teaching strategies I admit I sometimes feel jealous when I read other language teaching blogs I follow (most of them, actually): one-to-one settings, diligent adult students who choose to be in the classroom, or small groups at language schools where grouping students for a variety of tasks does not seem to be a problem and language appears to flow naturally and simultaneously. Yes, I know – those teachers have many years of teaching under their belt and with a good repertoire of classroom management strategies! I don’t even know if I could succeed in any of those settings, to be honest.

Wall-E and Toy Story Screenwriter Reveals the Clues to a Great Story Warning: this video contains strong language Last week we posted Pixar’s 22 Rules of Storytelling, a list of 22 golden tips first tweeted by Pixar Story Artist Emma Coats.The article received a tremendous response and since then a number of people have mentioned to us this TED talk by Andrew Stanton. Stanton was the writer for all three Toy Story movies, as well as being the writer/director for Wall-E, Finding Nemo and John Carter. How Visual Thinking Improves Writing Younger kids typically love to draw and aren’t too worried about the outcomes of their artwork — until they get older. By the time they’ve learned to read and write, art takes a back burner to academics, primarily because of what most schools prioritize. Over time it becomes harder for kids to think in pictures the way they once did. But what if students were encouraged to think in pictures alongside words? “There’s something about writing that is a link to your brain,” said Marissa Moss, author of the popular children’s book series Amelia’s Notebook. In the books, Moss takes on the persona of a little girl expressing her ideas about the world and people around her.

The 7 universal story plots that still entrance audiences - Sparkol Plotting the story – a common stumbling block for even the most seasoned storyteller. The options seem endless. But what if there were just 7 universal plots underpinning all stories? What if finding the right one could bring your message alive and captivate your audience every time? In The Seven Basic Plots: Why We Tell Stories, Christopher Booker explains how our best-loved stories throughout history fall into only 7 distinct story types. He follows in a long line of theorists who have tried to explain why storytelling is such a universally powerful means of communication.

What Keeps Students Motivated to Learn? Educators have lots of ideas about how to improve education, to better reach learners and to give students the skills they’ll need in college and beyond the classroom. But often those conversations remain between adults. The real test of any idea is in the classroom, though students are rarely asked about what they think about their education. A panel of seven students attending schools that are part of the “deeper learning” movement gave their perspective on what it means for them to learn and how educators can work to create a school culture that fosters creativity, collaboration, trust, the ability to fail, and perhaps most importantly, one in which students want to participate. Project-based learning is the norm among these students, but they also have a lot of ideas about what makes a good project work. Students want projects to be integrated across subjects, not separated by discipline.

Pixar’s 22 Rules of Storytelling These rules were originally tweeted by Emma Coats, Pixar’s Story Artist. Number 9 on the list – When you’re stuck, make a list of what wouldn’t happen next – is a great one and can apply to writers in all genres. You admire a character for trying more than for their successes.You gotta keep in mind what’s interesting to you as an audience, not what’s fun to do as a writer. They can be very different.Trying for theme is important, but you won’t see what the story is actually about til you’re at the end of it. Now rewrite.Once upon a time there was ___.

School of Education at Johns Hopkins University-In A Single Bound: A Short Primer on Comics for Educators by Drego Little There is a long and well-documented history of prejudice against comics and what educators think they might represent. Despite this history, comics have a strong following among writers and other serious artists. 66 Experiments by Charles Bernstein Category: Writing Techniques 1. Homolinguistic translation: Take a poem (someone else's, then your own) and translate it "English to English" by substituting word for word, phrase for phrase, line for line, or "free" translation as response to each phrase or sentence.

Quillionz - Get Quiz Questions Automatically Generated From Documents Quillionz is a new supporter of FreeTech4Teachers.com Quillionz is a new service that makes it super easy to have a set of reading comprehension questions and quiz questions generated from a passage of text. There is a free version and pro (paid) version of Quillionz. How Stories Change the Brain Ben’s dying. That’s what Ben’s father says to the camera as we see Ben play in the background. Ben is two years old and doesn’t know that a brain tumor will take his life in a matter of months. Ben’s father tells us how difficult it is to be joyful around Ben because the father knows what is coming.

28 Creative Writing Exercises and Prompts This is my first year teaching high school creative writing, and at the beginning of the year, I wasn’t entirely sure what to do, or how to do it. I’d only ever taught college-level fiction workshops and I knew the same approach wouldn’t work with younger students and a ten-month class, so I have kind of trial-and-errored my way through the year, and am pretty pleased with how things have turned out. I decided to structure my class by spending about 4-6 weeks on each of the following: General intro to literary devices/elements of craft (voice, POV, imagery, etc), fiction, poetry, drama, and creative nonfiction.