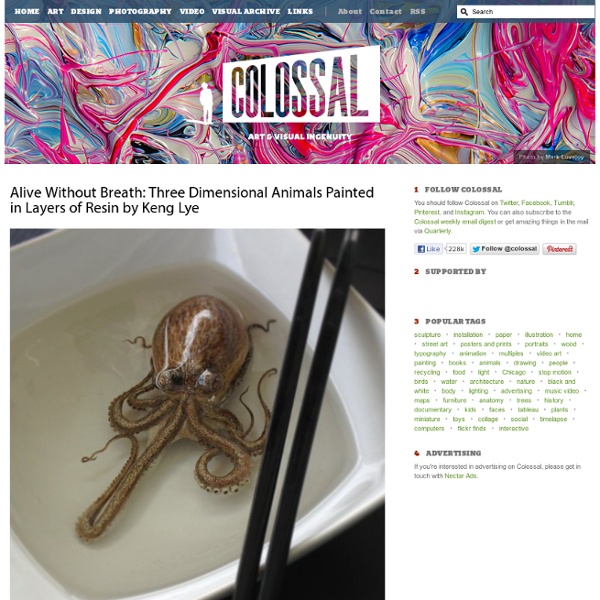 Singapore-based artist Keng Lye creates near life-like sculptures of animals relying on little but paint, resin and a phenomenal sense of perspective. Lye slowly fills bowls, buckets, and boxes with alternating layers of acrylic paint and resin, creating aquatic animal life that looks so real it could almost pass for a photograph. The artist is using a technique very similar to Japanese painter Riusuke Fukahori who was featured on this blog a little over a year ago, though Lye seems to take things a step further by making his paint creations protrude from the surface, adding another level of dimension to a remarkable medium. See much more of this series titled Alive Without Breath over on deviantART. (via ian brooks) Update: I have some additional details from the artist that I’d like to add here, as this post seems to be getting a lot of attention.

The 6 Most Incredible Real World Beast Masters Disney movies make hanging out with wild animals look like a walk in a fun, happy, completely predator-free park. But in the real world, being around untamed wildlife isn't so much about carefree singing and dancing and monkeyshinin' as it is about running and screaming. Then coming back later to clean up the poop trail you inevitably left behind. Or it usually is, anyway. #6. To explain this picture of a child cuddling his 20-foot-long snake, we have to tell a story. Fotobank.ruSurprisingly, it didn't end with the kid as poop. Imagine you're the proud parents of a 3-month-old baby. GettyAll that's missing is the colic. So, small. Not Koun Samang's dad, who found a python in his baby's bed and sweetly returned it to the jungle, presumably while giving it a back massage and singing it snaky lullabies. Herald Sun"Hey, what's the worst that could happen?" Seven years later, Samang and the now-giant snake he named "Lucky" are going strong. Herald SunTasting. #5. topdesignmag.com Come on, dude.

Spoon & Tamago World’s Best Father documents what an amazing parent he is [30 pictures] In this ongoing series from photographer Dave Engledow, we get real insight into what it means to be an amazingly good dad. You may think some of the images show him being something less than exemplary in his parenting, but you’d be wrong and he has the mug to prove it… (via Pleated Jeans, Sad and Useless) Spectacular Moleskine Doodles Explode with Energy - My Modern Met Philippines-based illustrator Kerby Rosanes proves that doodling can be so much more than scratching unintelligible scribbles on paper. Through his Sketchy Stories blog, Rosanes shares his wonderful world of doodling in a simple Moleskine sketchbook. Equipped with an ordinary Moleskine, a few Uni Pin drawing pens, and his innate gift for drawing, the artist is able to transport viewers to a world where tiny, cartoonish creatures explode with gusto to make up larger entities. Each of the illustrator's complex and crowded sketches are filled with minute details that allow the eye to wander and discover new characters and designs at every turn. Kerby Rosanes websiteKerby Rosanes on deviantART via [Gaks]

Quilling - Turning Paper Strips into Intricate Artworks Quilling has been around for hundreds of years, but it’s still as impressive and popular now as it was during the Renaissance. The art of quilling first became popular during the Renaissance, when nuns and monks would use it to roll gold-gilded paper and decorate religious objects, as an alternative to the expensive gold filigree. Later, during the 18th and 19th centuries, it became a favorite pass-time of English ladies who created wonderful decorations for their furniture and candles, through quilling. Basically, the quilling process consists of cutting strips of paper, and rolling them with a special tool. Because it requires so few supplies, quilling is available to anyone with enough patience to give it a try, and with a little bit of practice you’ll be creating some pretty amazing paper artworks, just like iron-maiden-art, whose works I think show the beauty of quilling. Reddit Stumble

Hurricane Rescue Story for Pet Lovers The story begins with the rescuers finding this poor little guy they named Ralphie that someone had already taken under their wing but weren't equipped to adopt; Ralphie, scared and nearly starved - joined the rescuers I wouldn't think anything could live thru this...but we were wrong this little lady survived that wreckage ... here she is just placed in the car - scared, but safe :) and no longer alone! Instant friends, they comforted each other in the car. Add two more beagles found after that ...the more the merrier... Oh oh - a new traveler is added to the mix... (note: the cat coming over the seat needing shelter...) how is this going to work??? It's going to work just fine, thank you! Life is Good! Hope this brings a little sunshine to your day.

Design Ideas and Tech Concepts - Toxel.com Fake Capsizing Boat Artist Julien Berthier created a boat, named Love Love, that looks like it’s sinking, but actually has a motor that allows it to be driven around, fully afloat. Check past the jump for a picture of the boat out of the water. As one can plainly see, the boat has a proper bottom: This picture of the boat in port was too hilarious not to include: Julien Berthier: Unique artist, troll of the high seas, or both? >>>See also: Optical illusion of little girl chasing a ball down the street used to slow down reckless drivers. (designboom via DVICE via Geekologie) Crazy Awesome Paintings by Vladimir Kush Here is a collection of the incredible paintings of Vladimir Kush. Vladimir has been creating these surrealistic paintings since the late 80’s. I’m extremely impressed by his work, and you should be as well! Related Plywood Paintings by Robert Romanowic Plywood Paintings by Robert Romanowic, very unique and awesome! February 8, 2011 In "Inspiration" Amazing Contemporary Paintings by Christine Krainock Christine Krainock creates original, abstract oil painting & acrylic knife painting. December 12, 2011 In "Fine Art" Ellison Design student based in CA who was one of the co-founder of AIA and CubeBreaker.com