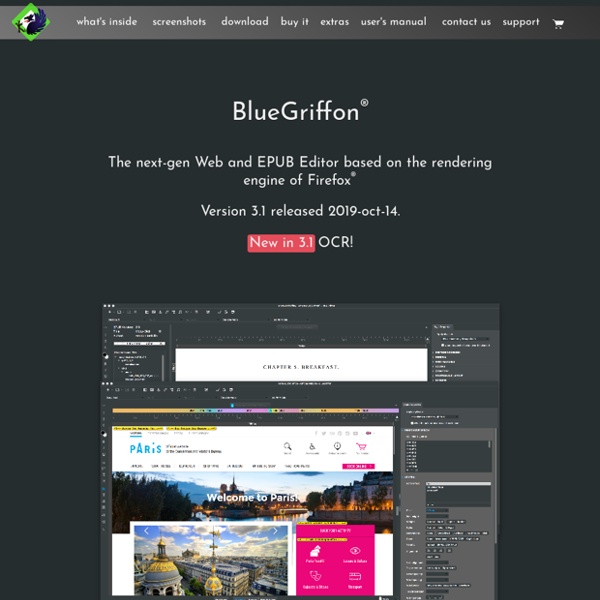 BlueGriffon is a new WYSIWYG content editor for the World Wide Web. Powered by Gecko, the rendering engine of Firefox, it's a modern and robust solution to edit Web pages in conformance to the latest Web Standards. It's free to download (current stable version is 1.7.2) and is available on Windows, Mac OS X and Linux. BlueGriffon is available in English, Dutch, Finnish, French, Czech, German, Hebrew, Hungarian, Italian, Japanese, Korean, Polish, Simplified Chinese, Serbian, Slovenian, Spanish, Swedish and Traditional Chinese BlueGriffon is an intuitive application that provides Web authors (beginners or more advanced) with a simple User Interface allowing to create attractive Web sites without requiring extensive technical knowledge about Web Standards. Because Gecko lives inside BlueGriffon, the document you edit will look exactly the same in Firefox.

Thorium Reader – Liseuse pour livres au format EPUB Thorium Reader is the EPUB reader of choice for Windows 10, MacOS and Linux. This EDRLab application is in constant development and aims at becoming a reference for accessing EPUB 3 publications in reflow or fixed layout format, audiobooks and visual narratives, LCP protected or not. It is localized in a large set of languages, each version offering new languages. Lokalize Lokalize is also a general computer-aided translation system (CAT) with which you can translate OpenDocument files (*.odt). Translate-Toolkit is used internally to extract text for translation from .odt to .xliff files and to merge translation back into .odt file. Lokalize with French translation of Konqueror Lokalize under Windows and OS X There are stripped-down Qt-only versions of Lokalize which are self-contained, i.e. they do not need KDE installed to run:

10 Simple Steps to Operating Microsoft's System Preparation Tool Guest blogger D. J. Moore noticed that we’ve not been covering IT content as much as we have in the past, and this saddened him. In an effort to correct our course, he’s submitted these 10 simple steps to operating Microsoft’s System Preparation Tool so that we might pass them along to you. Learn CSS Positioning in Ten Steps: position static relative absolute float 1. position:static The default positioning for all elements is position:static, which means the element is not positioned and occurs where it normally would in the document. Normally you wouldn't specify this unless you needed to override a positioning that had been previously set. 2. position:relative

LaTeX - Mac OS, Windows, Linux The LaTeX team cannot guarantee that TeX distributions, even recent ones, contain the most recent version of LaTeX. It may happen that you need a more recent LaTeX than the one that your favourite TeX distribution carries, e.g., in order to get a particular bug fix. In that case you will need to fetch LaTeX from CTAN and install it on top of your distribution. See below for details. TeX Distributions If you’re new to TeX and LaTeX or just want an easy installation, get a full TeX distribution.

ArtfulBits > Products > Android > aiLocalizer Introduction Android Localizer is a simple application written with use of .NET Framework 2.0. It's main goal is to simplify localization of the application as much as possible, give user and developer a new tool that helps in localization providing. Application is very simple and has smallest learning curve. So even end user of the application can use it even without any deep technical skills.

HTMLPad - Product line Rapid CSS Editor Buy Now from $29.95 More Info Lightweight HTML and CSS editor for designers who work with CSS and HTML most of the time and do not do script programming. HTMLPad