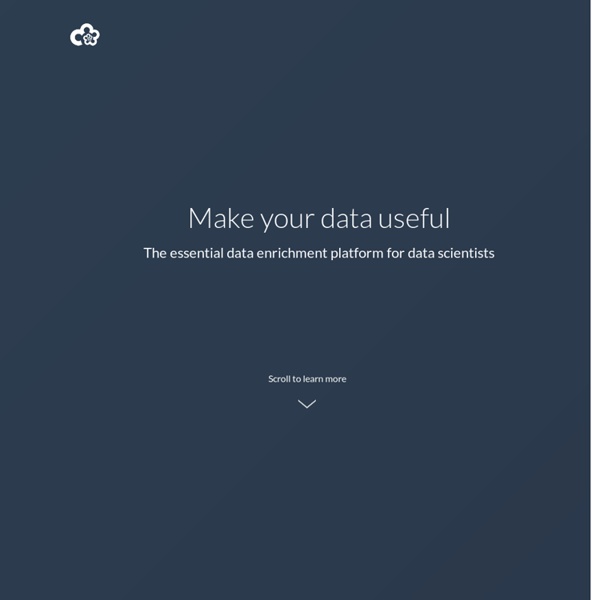 Distributed Productino (Gutenberg project) Trans-Pacific Partnership (TPP) The Trustees of Distributed Proofreaders Foundation are concerned about a new international agreement, the Trans-Pacific Partnership (TPP). The TPP will result in significant copyright term extensions in signatory countries, which will have the immediate impact of slowing or halting growth of the public domain in many parts of the world. The agreement was drafted in secret. Personal Internet Fundraisers It will take anywhere from 3 seconds to 1 minute for your pic to upload, depending on how big it is. You're going to see this message every time you post a new pic. So, we're making the text really long so that it'll take you at least five picture uploads to read it all. Here's what we're thinking...While your first picture is uploading think about someone you want to kiss. When you upload your second pic think about one friend who you can beat in a race.

Human Workers, Managed by an Algorithm Global workforce: Remote digital workers earned $0.32 each for producing these self-portraits. Stephanie Hamilton is part of something larger than herself. She’s part of a computer program. The 38-year-old resident of Kingston, Jamaica, recently began performing small tasks assigned to her by an algorithm running on a computer in Berkeley, California. That software, developed by a startup called MobileWorks, represents the latest trend in crowdsourcing: organizing foreign workers on a mass scale to do routine jobs that computers aren’t yet good at, like checking spreadsheets or reading receipts.

Community Tools Download Community ToolsVersion 2.0 beta 3 · 10.01.2013 · Changelog · License: free, GPL You need a web server with PHP and MySQL to run this package. If you have ever installed a CMS such as WordPress, Joomla or Drupal, everything should be familiar. Please note: As our software is quite complex, it needs a bit more memory during the initial setup compared to usual configurations. Please select a hosting provider where you can set PHP memory limit (php_value memory_limit) to 128MB. The Beginner’s Guide to Outsourcing Effectively My journey with outsourcing began in college. I wish I could say that I accomplished something. I wish I could say that my decision to outsource made me money, or even just saved me time. Yet, I can’t. I did everything wrong. I saved up $800 for outsourcing tasks (which was also my net worth at the time).

Wired 14.06: The Rise of Crowdsourcing Remember outsourcing? Sending jobs to India and China is so 2003. The new pool of cheap labor: everyday people using their spare cycles to create content, solve problems, even do corporate R & D. By Jeff HowePage 1 of 4 next » 1. The Professional Mobile App Challenge Home Latest App News Run Your Own Contest Blog Eflux Welcome to e-flux projects. In 2001 we initiated a program of special projects for e-flux.com. The early part of this program focused on web publications and art works that explicitly engage audience participation. In 2004 e-flux opened a storefront space in New York's Chinatown where this program evolved into a series of physical public projects, which subsequently travel to contemporary art institutions worldwide. In 2006 e-flux opened a second location in Berlin.