The Verge interview: David Carr on curation, crowdsourcing, and the future of journalism 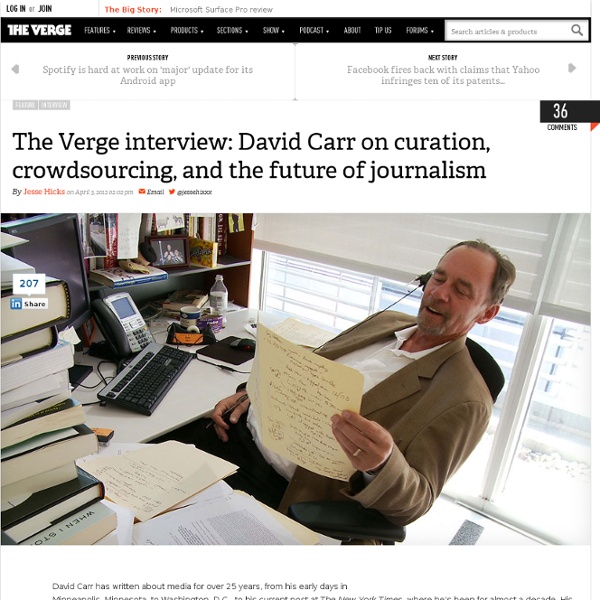 212inShare Jump To Close David Carr has written about media for over 25 years, from his early days in Minneapolis, Minnesota, to Washington, D.C., to his current post at The New York Times, where he’s been for almost a decade. Let’s start by talking about the Curator’s Code. I paid attention to it, number one, because of who was proposing it. The other thing is, people generally talk on backchannels: ‘Oh, I had that first,’ or ‘That guy ripped me off,’ or ‘She’s always picking my pocket.’ I just think that people seem less and less concerned about where their information comes from at a time when I think they should be more and more concerned about it. Do you consider that lack of concern about where content comes from a problem because it means fewer clicks for people who do create original content — or is there some more abstract sense of community that gets lost when we forget where things come from? I think the primary concern is consumer literacy. Section TOC Title Related:  CROWDSOURCING

Edit Huddle: The Crowd as Editor By Rachel Hyman, head of marketing at Edit Huddle Blog Errors are a Problem Think about your favorite blogs, whether they’re political, tech, or news blogs. If they publish frequently, chances are their posts have errors — something is misspelled, the grammar is wonky, or there’s a broken link. That’s where Edit Huddle comes in. Everyone on the Edit Huddle team is a huge blog reader, and we all get frustrated over errors, especially when the comment section gets inundated with people more concerned with pointing out mistakes than with having a productive discussion. We believe that there’s a large market of blog readers who would avail themselves of the Edit Huddle tool — much larger than self-proclaimed grammar Nazis who take to the comment section upon spotting errors. Thought Catalog posts about 65 times a week. The crowd is so essential to Edit Huddle because they, the blog readers, are the ones spotting the errors and flagging them to be sent to the blogger. History + Progress

Five Ways Crowdsourcing Can Accelerate Your Start-Up Crowdsourcing is a multifaceted creature, one that can put the power of automation and the flexibility of distributed work into the backbone of your start-up. Here are five simple ways you can use crowdsourcing accelerate your startup: 1. Crowdfunding is a new way to raise money online that is gaining popularity. Platforms like Kickstarter, Indiegogo, and Rockethub have helped launch donation-based platforms into the limelight. Currently illegal in the U.S., but perfectly legal in parts of Europe, equity-based crowdfunding is where people buy an ownership stake in your business. There are two ways to legally crowdfund your for-profit startup in the U.S. Another possibility for the more risk tolerant is to pre-sell a yet to be developed product. One of the myriad Kickstarter projects seeking funding. 2. Sites like Idea Offer and Jig can give start-ups a great place to go when they are stuck for ideas. 3. Need a new name for your company or product? 4. 5. 6.

威客-猪八戒网，中国最大的威客网站 Witkey - task of China's leading professional Witkey website Distilled Wisdom, Emerging forms of Crowdsourcing Crowdsourcing Gazette UK Story Exchange What is Story Exchange? Story Exchange gives listeners a chance to help create quality local journalism by directly supporting stories that matter to them. Story Exchange is a project of the Public Radio Exchange (prx.org), Louisville Public Media and Spot.us. How does it work? There's a great story out there that needs telling. That's where Story Exchange comes in: With the help of listeners like you, your support can directly make that story become reality. You have a direct stake in creating the journalism that matters to you. In further stages of this project, we'll be soliciting story ideas from you and then connecting them to producers, reporters, and listeners who will combine efforts to make them happen. Does it work? Yes! Pitching and funding a story Story Exchange will be designed so any producer can pitch a story and then as for funding. How does the money part work? What does public radio add to all this? You prove that support when you pledge and listen to public radio. Questions?

s Hall of Fame There are a myriad of possibilities in the search for crowdsourcing milestones that announced its advent and its adoption as a model for online production, problem solving and for organizing for collective action: Commercial applications, advertising campaigns that succeed or backfire, funding for entrepreneurial ventures. This list of one dozen focuses on the pinnacles that demonstrate crowdsourcing’s highest potential: For public good, scientific research and technological innovation. Each of these events involves a seminal moment when crowdsourcing came into greater public awareness being driven from calls to action that resulted in ever increasing numbers of individuals working together in a manner that has raised our collective consciousness. We have selected our landmark crowdsourcing events based on criteria that make them notable because of their scale, their impact and the extent of their outreach to a wider audience both demographically and geographically.

Crowdsourcingpower's Blog Crowdbands: A Fan-Sourced Record Label – Fans Buy-In and Help Make Creative Decisions Crowdbands is a fan-sourced record label that lets fans in on discussions and creative decisions surrounding the release of an album. Currently, The Donnas have partnered up with the site and are letting fans determine the nature of a partnership between them and Joan Jett. Should The Donnas record one of her classics or should they make an original with Jett? It's your choice. If that is, you're a fan that's willing to pay the membership fee of $25 per year. If so, you'll get to make the call. "This decision could be a failing when it comes to building out a business, in our opinion, as bands of the nature... aren't exactly tumbling out of trees," writes Brenna Ehrlich at Mashable. As one commenter put it, Crowdbands is like Sellaband meets Stereofame. Having just launched, there aren't too many decisions for fans to vote on, but in time, there could be some interesting input to be had. Here, Brett Anderson, the vocalist for The Donnas, talks about Crowdbands:

Business Insider Crowdsourcing Management Reviews for Better Management - Linda Hill & Kent Lineback by Linda Hill & Kent Lineback | 9:49 AM January 13, 2012 The January-February issue of Harvard Business Review features a series of short articles that each present an “audacious idea.” Our piece in that series — “Crowdsource Management Reviews — And Make Them Public, Too” asks what you would do if your employees were assessing their bosses online and making their collective assessments public. Here’s the situation we described: A group of employees has set up an independent website where all employees can use online social collaboration tools to assess their bosses on eight key managerial dimensions — such as delegation, communication, clarity of direction, and the like — taken from your company’s basic course on management. All the individuals’ ratings for a boss are aggregated into a single rating for each dimension. Individual comments are aggregated into a single review — like a wiki, which is a single document composed by multiple authors. Good management. Will this be easy?