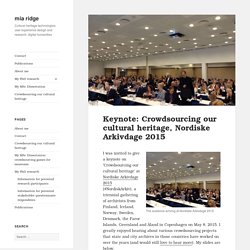 I greatly enjoyed hearing about various crowdsourcing projects that state and city archives in those countries have worked on over the years (and would still love to hear more). My slides are below. Play to Cure: Genes in Space » EuroPAWS. Play to Cure: Genes in Space was developed by Guerilla Tea Games in collaboration with Cancer Research UK, and was released on iOS and Android. 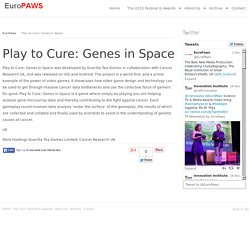 The project is a world first, and a prime example of the power of video games. It showcases how video game design and technology can be used to get through massive cancer data bottlenecks and use the collective force of gamers for good. Play to Cure: Genes in Space is a game where simply by playing you are helping analyse gene microarray data and thereby contributing to the fight against cancer. Each gameplay round involves data analysis ‘under the surface’ of the gameplay, the results of which are collected and collated and finally used by scientists to assist in the understanding of genetic causes of cancer. Mark Hastings Guerilla Tea Games Limited, Cancer Research UK wpcf-series-title: Looking for (crowdsourcing) love in all the right places - Open Objects. One of the most important exercises in the crowdsourcing workshops I run is the ‘speed dating’ session. 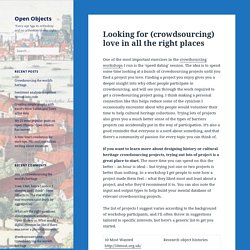 The idea is to spend some time looking at a bunch of crowdsourcing projects until you find a project you love. Finding a project you enjoy gives you a deeper insight into why other people participate in crowdsourcing, and will see you through the work required to get a crowdsourcing project going. I think making a personal connection like this helps reduce some of the cynicism I occasionally encounter about why people would volunteer their time to help cultural heritage collections. Trying lots of projects also gives you a much better sense of the types of barriers projects can accidentally put in the way of participation.

Race and the Digital Humanities: A Crowdsourced Project List (with image) · adelinekoh. The Memory Project: Home. FACITY.COM. A Thousand Faces Staring Back At You. A Thousand Faces is a website where you can have your portrait published, along with some personal information. 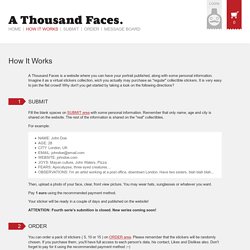 Imagine it as a virtual stickers collection, wich you actually may purchase as "regular" collectible stickers. It is very easy to join the flat crowd! Why don't you get started by taking a look on the following directions? Fill the blank spaces on SUBMIT area with some personal information. Remember that only name, age and city is shared on the website. For example: NAME: John DoeAGE: 28CITY: London, UKEMAIL: johndoe@email.comWEBSITE: johndoe.comJOYS: Mayan culture, John Waters, PizzaFEARS: Apocalypse, three eyed creatures…OBSERVATIONS: I'm an artist working at a post office, downtown London.

Then, upload a photo of your face, clear, front view picture. Pay 1 euro using the recommended payment method. Operation War Diary. Mapping Main Street » A Collaborative Documentary Media Project. Historypin. UT Austin:Portugal Documentary Workshops Lisbon. Mapping Flickr Commons. Update 6 Oct 2012 – I now have a web-based map up and running Did you know that Flickr Commons, home to some of the finest images from many of the best public collections in the world, currently has 181,247 images of which 17,456 (9.6%) 218,514 images of which 27,343 (12.5%) are geotagged? 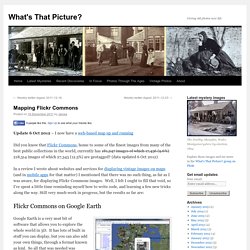 (data updated 6 Oct 2012) In a review I wrote about websites and services for displaying vintage images on maps (and in mobile apps for that matter) I mentioned that there was no such thing, as far as I was aware, for displaying Flickr Commons images. Well, I felt I ought to fill that void, so I’ve spent a little time reminding myself how to write code, and learning a few new tricks along the way. Still very much work in progress, but the results so far are: Flickr Commons on Google Earth Flickr Commons on Google Earth Google Earth is a very neat bit of software that allows you to explore the whole world in 3D. How to view Commons images on Google Earth. Jisctsw_10_01opt.pdf. The Civil War . Images of the Civil War. Background on the Archival Images: In late September 1862, Mathew Brady opened an exhibition entitled "The Dead of Antietam" at his New York gallery. 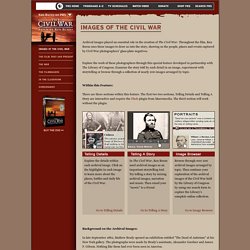 The photographs were made by Brady's assistants, Alexander Gardner and James F. Gibson. Nothing like them had ever been seen in America. The Valley of the Shadow: The War Years, Civil War Images. Historypin. A Lente Verde : Castro do Zambujal. Browse Exhibits · History Harvest. The Lincoln, Nebraska Refugee Community History Harvest took place throughout the Fall 2012 semester at the University of Nebraska-Lincoln. 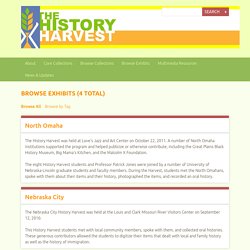 A number of local institutions supported the program and helped publicize or otherwise contribute to the program, including the Center for People in Need and the Nebraska Department of Health and Human Services. The eleven History Harvest students and Professor Patrick Jones were joined by a number of University of Nebraska-Lincoln graduate students and faculty members. During the Harvest, students met with refugees and former refugees and spoke with them about their items and their history, photographed the items, and recorded oral histories. Further Reading. Significant Objects. Object No. 94 of 100 [The auction for this Significant Object, with story by Victor LaValle, has ended. 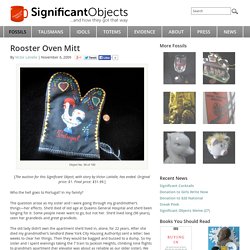