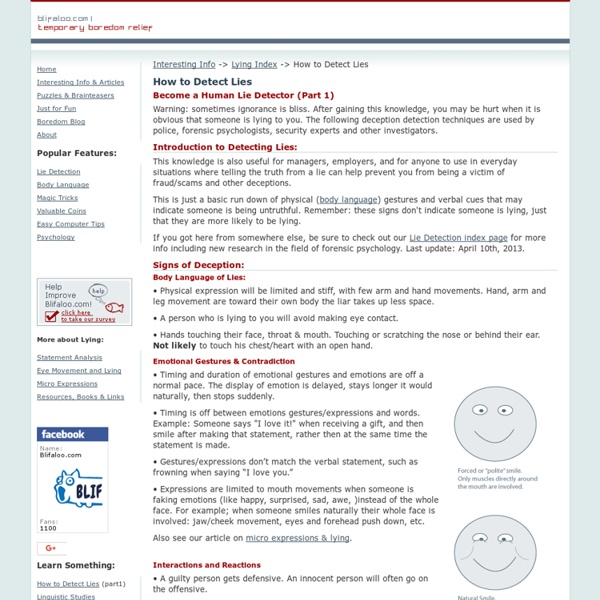 Interesting Info -> Lying Index -> How to Detect Lies Become a Human Lie Detector (Part 1) Warning: sometimes ignorance is bliss. After gaining this knowledge, you may be hurt when it is obvious that someone is lying to you. The following deception detection techniques are used by police, forensic psychologists, security experts and other investigators. Introduction to Detecting Lies: This knowledge is also useful for managers, employers, and for anyone to use in everyday situations where telling the truth from a lie can help prevent you from being a victim of fraud/scams and other deceptions. This is just a basic run down of physical (body language) gestures and verbal cues that may indicate someone is being untruthful. If you got here from somewhere else, be sure to check out our Lie Detection index page for more info including new research in the field of forensic psychology. Signs of Deception: Body Language of Lies: • A person who is lying to you will avoid making eye contact. Bored?

Related:  Manipulation and Persuasion • zebalafre • Forensics In The 1600s • Psychology and Relationships

The tricks propagandists use to beat science Back in the 1950s, health professionals became concerned that smoking was causing cancer. Then, in 1952, the popular magazine Reader’s Digest published “Cancer by the Carton,” an article about the increasing body of evidence that proved it. The article caused widespread shock and media coverage. Today the health dangers of smoking are clear and unambiguous. And yet smoking bans have been slow to come into force, most having appeared some 40 years or more after the Reader’s Digest article.

Useful and Handy Info You Must Know Useful and handy information that you probably don't know Ants Problem : Ants hate cucumbers. Keep the skin of cucumbers near the place or ant hole. To get pure and clean ice : Boil water first before freezing. To make the mirror shine : Clean with spirit To remove chewing gum from clothes : Keep the cloth in the freezer for an hour. People Can Be Convinced They Committed a Crime That Never Happened – Association for Psychological Science – APS Evidence from some wrongful-conviction cases suggests that suspects can be questioned in ways that lead them to falsely believe in and confess to committing crimes they didn’t actually commit. Research provides lab-based evidence for this phenomenon, showing that innocent adult participants can be convinced, over the course of a few hours, that they had perpetrated crimes as serious as assault with a weapon in their teenage years. The research, published in Psychological Science, a journal of the Association for Psychological Science, indicates that the participants came to internalize the stories they were told, providing rich and detailed descriptions of events that never actually took place. “Our findings show that false memories of committing crime with police contact can be surprisingly easy to generate, and can have all the same kinds of complex details as real memories,” says psychological scientist and lead researcher Julia Shaw of the University of Bedfordshire in the UK.

Body Language and Flirting - Blifaloo Interesting Info -> Body Language -> Flirting Body Language (part 1) Quick Jump: General Signs of Flirting | Male Flirting | Female Flirting Also See: Body Language Resources | Decoding Male Body Language Updated March 21st - 2012. What is your body language saying? Narrowing the red margins of your lips is a clear sign of anger, while massaging your forehead can signal uneasiness. Brushing hair off your face is a combination of nerves and flirtationIf you nod in clusters of three, the speaker will sense your interestStuffing your hands in your pockets means you're probably hiding somethingIn a seated conversation, lifting your toes means your feelings are extra-positive (RealSimple.com) -- Every last gesture -- whether it's a tilt of the head or plain fidgeting -- tells a story. Do you look down when you speak? Play with your hair? Lean to one side?

5 things the media does to manufacture outrage. 5 things the media does to manufacture outrage. People are so sensitive these days! People are just offended by every little thing! Visual Expert Human Factors: Eyewitness Memory Is Unreliable Eyewitness Memory is Unreliable Marc Green Seminar Available on this topic. Australian eyewitness expert Donald Thomson appeared on a live TV discussion about the unreliability of eyewitness memory. What Does Your Body Language Say About You? How To Read Signs and Recognize Gestures - Jinxi Boo - Jinxi Boo Art by LaetitziaAs we all know, communication is essential in society. Advancements in technology have transformed the way that we correspond with others in the modern world. Because of the constant buzz in our technological world, it's easy to forget how important communicating face-to-face is. When conversing old-school style, it's not only speech we verbalize that matters, but what our nonverbal gestures articulate as well. Body language is truly a language of its own. We all have quirks and habits that are uniquely our own.

25 Awesome Virtual Learning Experiences Online - Virtual Education Websites Just because you’re online doesn’t mean that you can’t experience the world first-hand — or as close to first-hand as possible. Here are websites that feature virtual learning experiences, exposing online visitors to everything from history to geography, astronomy to anatomy, literature to government. 7 Wonders Panoramas – 360-degree views of the Seven Wonders of the World. Arounder Virtual Tour of the Moon – 360-degree panoramic views of the moon, courtesy of the Apollo 11, 12 and 17 missions. (Many other Earth locations also available on arounder.com.) Weasel word - Wikipedia A weasel word, or anonymous authority, is an informal term for words and phrases aimed at creating an impression that a specific or meaningful statement has been made, when instead only a vague or ambiguous claim has actually been communicated. This can enable the speaker to later deny the specific meaning if the statement is challenged. Where this is the intention, use of weasel words is a form of tergiversation. Weasel words can be used in advertising and in political statements, where it can be advantageous to cause the audience to develop a misleading impression. Some weasel words have the effect of softening the force of a potentially loaded or otherwise controversial statement through some form of understatement; for example, using detensifiers such as "somewhat" or "in most respects".[1] Origin[edit]

7 Bizarre Witch Trial Tests 1. Swimming Test As part of the infamous “swimming test,” accused witches were dragged to the nearest body of water, stripped to their undergarments, bound and then tossed in to to see if they would sink or float. Since witches were believed to have spurned the sacrament of baptism, it was thought that the water would reject their body and prevent them from submerging. According to this logic, an innocent person would sink like a stone, but a witch would simply bob on the surface. The victim typically had a rope tied around their waist so they could be pulled from the water if they sank, but it wasn’t unusual for accidental drowning deaths to occur.

Color Psychology by David Johnson Like death and taxes, there is no escaping color. It is ubiquitous. Yet what does it all mean?