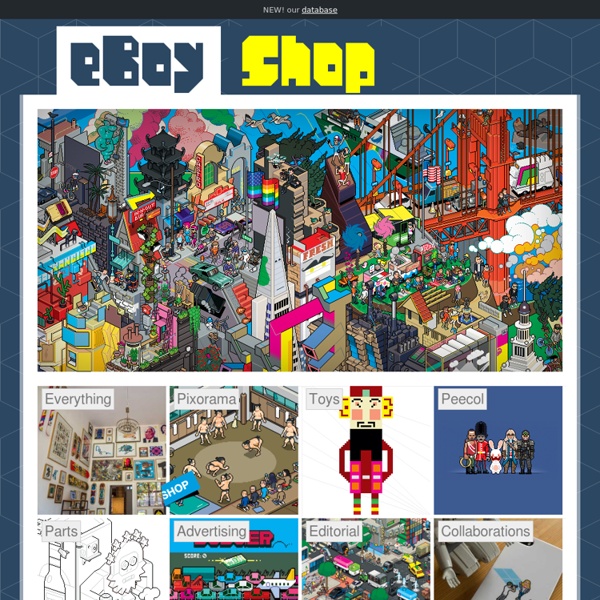 Selected Works 138 Years of Popular Science (2011) In the Fall of 2011, I was asked by the publishers of Popular Science magazine to produce a visualization piece that explored the archive of their publication. PopSci has a history that spans almost 140 years, so I knew there would be plenty of material to draw from. Working with Mark Hansen, I ended up making a graphic that showed how different technical and cultural terms have come in and out of use in the magazine since its inception. Bearded Celebrity Women Have you ever wondered as to what Jessica Alba, Katy Perry, Lily Allen, Kate Beckinsale or other beautiful celebrity women would look like if they had hair like a man? We’re not talking on the head, but the face, arms and chest. Anyway, Freaking News has put on a contest for those with advanced Photoshop skills in which they ask contestants to slap on a beard, chest hair and maybe even a unibrow to some of today’s most popular female celebrities.

Architectural Absurdities by Tom Ngo Toronto-based illustrator Tom Ngo has updated his drawing series of "architectural absurdities" with additions including a building made of stairs and an impossible lighthouse. Above and top: Dim House (2012) - "a depiction of a blind building, as it has no windows on its dormers" Building on the themes of his first sketches from 2009, Tom Ngo imagines fantastical structures that reinterpret the architectural vocabulary of common building typologies. Greg Broadmore - Home Welcome to the website of artist, writer and friend to robots, Greg Broadmore. During the day he works as an illustrator, writer and conceptual designer for Weta Workshop and has designed for the motion pictures: District 9, King Kong, The Lion, the Witch and the Wardrobe, and Black Sheep amongst many, many others. Through Weta Workshop, he is the creator and designer of Dr. Grordbort's world of Rayguns and contraptions. Go and click the link and check it out, it's really good and I'm not just saying that! It's not all roses and lollipops though - he worked on the feature films, Halo and Evangelion, both of which fell over during production, but there are no surviving documents that prove that it was his fault.

The Half Graffiti Hotel Room by Tilt The Au Vieux Panier Hotel in Marseille, France, has worked with graffiti artist Tilt on the Half Graffiti Hotel Room. The outcome is certainly impressive, especially the sharp division of colorful and white that the artist went with. The hotel offers 6 artist rooms, and this new one by Tilt, is for sure the most impressive. In the end it is all about the details that make it stand out, because the concept could have gone wrong really easily in our mind. The consequence of the concept is the most impressive part of the project. Take a more detailed look at the Half Graffiti Hotel Room after the jump. Creative Dismantling exploding hospital pictures by espai MGR A disused hospital building in Valencia explodes and shifts into new configurations in this series of manipulated photographs by Spanish studio espai MGR (+ slideshow + movie). Led by espai MGR, the architects manipulated photographs of the former Hospital Universitario La Fe to draw attention to the need for "urban recycling" to revive empty buildings. "Nothing is unrelated in a city.

Martin Wittig Well, I am finally back from my Greece/ Russia trip. I had an AWESOME time!!! Greece was just plain beautiful, and Russia was exciting as well. I did a lot of sketching as you can imagine, but I also took plenty of time to just relax. This is going to be a really crazy month for me, so I am glad to feel rested and ready to tackle the work ahead. I will be posting more sketches, once I get the opportunity to scan them in....Here are a few that I put together.