Culture Code: Building A Company YOU Love. Science Of Persuasion. Trading Up The Chain: How To Make National News in 3 Easy Steps (Ex... Why Ideas And Products Become Contagious: The Jonah Berger Formula. [Ed note: For more on Jonah Berger's mission to map virality, pick up the April issue of Fast Company. 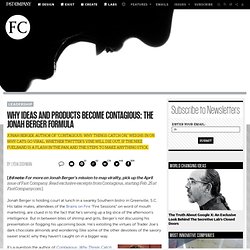 10 Sure-Fire Headline Formulas That Work. 13 Content Marketing Mistakes you Cannot Afford to Make. Content marketing is a very powerful tool, but you can easily sink yourself if you make any of these 13 critical mistakes. 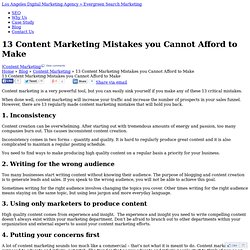 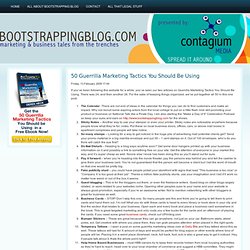 Propaganda critic: index of site dedicated to propaganda analysis. Brand Marketing: The Six Principles Of Persuasion. In my research of the psychology of persuasion I have found there are six overarching principles. 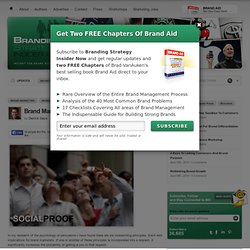 Each with implications for brand marketers. Report: We Are More Creative When We Help Others, Not Ourselves. There is an interesting set of findings from psychological experiments that suggest we see others' flaws and strengths more clearly than our own (I wrote about this in Good Boss, Bad Boss) and that, on average, human-beings make more rational decisions when make them for others rather than themselves. 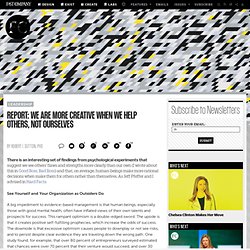 As Jeff Pfeffer and I advised in Hard Facts: See Yourself and Your Organization as Outsiders Do A big impediment to evidence-based management is that human beings, especially those with good mental health, often have inflated views of their own talents and prospects for success. This rampant optimism is a double-edged sword. The upside is that it creates positive self-fulfilling prophecies, which increase the odds of success. Do Less and Focus Hard: If You're Busy, You're Doing Something Wrong. This article is like a game of "telephone," in which the message gets distorted more and more the further you get from the source. 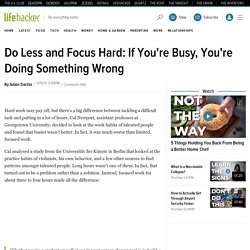 It's a thirdhand report, and the conclusions don't square with the secondhand source, which in turn distorts the original. First of all, you've conveniently omitted the fact that your secondhand source notes that both groups of violinists are working 50 hours a week on their music, so it's not like the elite group is relaxing more (50 hours is in excess of a typical full-time job), they're just allocating their "intensive practice" time differently and perhaps spending it differently. Second of all, if you scroll down, one of the commenters on the secondhand source went back to the original paper and discovered, "“At age 13 the award-winning musicians practiced 13.7 hr per week (Ruoff, 1981), an amount close to the 12.2 hr estimated by our best group and higher than the 8.8 and 6.2 hr per week estimated by the good and music teacher groups, respectively.

The Truth About Being "Done" Versus Being "Perfect" SMB-Branding-Infographic-Clives-Car.png (imagen PNG, 600 × 1920 píxeles) Consumer Behavior: The Psychology of Marketing. The 14 Most Powerful and Effective Words in Marketing. In Go Mobile, the book I’ve written with Jeanne Hopkins from HubSpot, we review a list of the 14 most powerful words in marketing so that readers can use them in their mobile marketing campaigns. 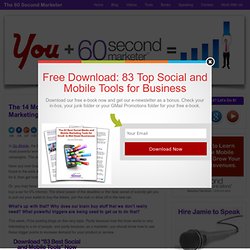 This post gives you a sneak peak at the list that’s included in the book. Enjoy. My collection of funny emails from my inbox. Subject: 5 MINUTE MANAGEMENT COURSE Lesson 1: A man is getting into the shower just as his wife is finishing up her shower, when the doorbell rings. 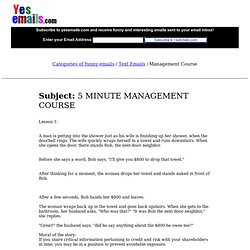 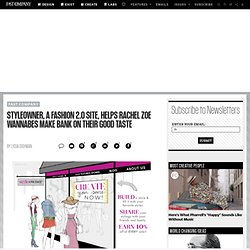 StyleOwner, an e-commerce site that heavily features social selling, just launched in open beta. Like Google’s Boutiques.com, StyleOwner gives bloggers, fashionistas and Rachel Zoe-wannabes the ability to create their own virtual storefront (for free) and stock it with items from over 2,000 brands carried by retail partners such as Nordstrom and Saks Fifth Avenue. As incentive to the seller to leverage their social network, anything purchased in their virtual marketplace earns them a 10 percent commission. Only 10 percent of the $275 billion of apparel and accessories sold in 2010 were purchased online, according to Sucharita Mulpuru at Forrester Research. However, StyleOwner’s founder and CEO Joel Weingarten tells Fast Company that e-commerce is growing by about 20+ percent annually. Help Me Lead – Employee Motivation and Leadership Tips. 8 Surprising Ways To Delight Customers. As a 16-year yoga practitioner, I often wish that I could find a place to practice while I travel. 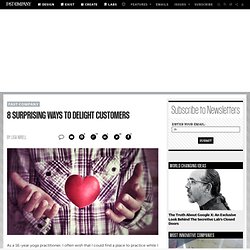 Most of the time, I have to traipse halfway across a city. But recently, I was surprised and delighted to learn that San Francisco Airport--which offers harried travelers a room specifically set aside for yoga practice--may be my next yoga destination. Abe Burmeister: How I Built A Fashion Brand With No Experience, Just Punk Rock Spirit (And The Web) Social Media Campaign Ideas to Build Fans & Increase Engagement.

Social Media Published on April 8th, 2010 | by Janine Popick Many social media programs are goaled on the amount of friends or followers as well as the engagement levels of those friends and followers. Contests, give-a-ways and polls are all great ways to build your followings and increase your engagement. Here is a list of some of the great ideas I have seen work for small businesses: Offer a gift card to your store to a randomly picked Facebook Fan every month. Give a free service to the first 5 people who answer a question about your company on Twitter correctly. Poll your audience on pop culture facts, industry news, their daily life or habits.