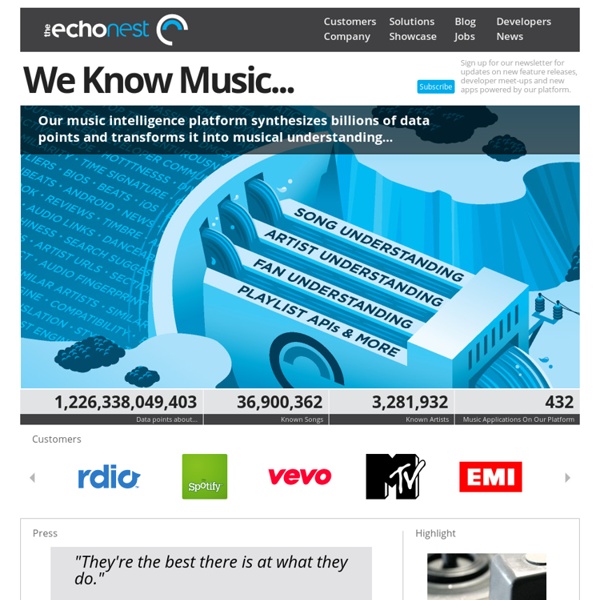 Batch edit your iTunes music info tags - Applelinks.com Okay, here's a pretty simple tip, but one you may not have known you could do. In iTunes, you all know how to edit the info tags, right? It's the same as getting info on a file from within the Finder; you just select the song you want, then hit Command+I on the keyboard (or select Get Info form the File menu). Click the Info tab in the window that opens, and you'll see the following information: Fair enough, but let's say you want to add an entire album's publication year to the info list, or that you want to change the genre to something a little more accurate, or even that you want to add artwork.

notes.variogr.am - The Echo Nest Musical Fingerprint (ENMFP) Tomorrow begins MHD Amsterdam and at it The Echo Nest is releasing a few new things. Some of our engineering team (who deserve a severe callout for all their work, let me stick with their codenames) have been working tirelessly to get “songs” to be a first-class member of our API, and as of today, they are — we now track many millions of songs and you can query for them by name and receive all sort of useful metadata, get similar songs (with amazing results even very deep in the catalog), and even get free (legal) playable audio for a huge collection of major label content (more on this later.) As part of this push to provide data about songs, we have been working on a music fingerprint— a way to resolve an unknown audio file (what we call a “track”) to a large database to identify it in our world (as a “song.”) And we’re ready to release this to the community to see how it performs in the wild.

The Answer Is The Ecosystem: Introduction. I've had the great pleasure to be invited to midem's Visionary Monday to speak about my thesis. For an extremely condensed version of my thesis, call it a quick run through if you will, watch the above video. I look forward to speaking more about this topic and related topics in the future. If you're doing an event, don't hesitate to contact me. Preview® Treatment Planning Software M2S will provide you with an interactive 3D model and measurements for your endovascular case planning needs. With access to our imaging experts and using our proprietary software, M2S can also handle your most complex AAA and TAA cases. Tortuous and highly angulated anatomyContrast and non-contrast dataFenestrated and branched aneurysm endovascular repair cases Features Accurate and dependable data to aid with optimal case planningInteractive pre-operative case planning with a 3D model and standard suite of measures for AAA, TAA, and fenestrated/branched casesAdvanced visualization through our Virtual Graft™ simulation technology with approved manufacturer-specific AAA/TAA stent graftsLongitudinal patient analysis with standardized measurement data and imagesPost-operative monitoring also available with Postview, a reduced-service version of 3D model and measurements for Preview.Ability to export data for analysis and research

4165-insiders-look-grateful-deads-wall-sound Blog>An Insider's Look at the Grateful Dead's Wall of Sound Audio Junkies 05:15 PM 10-29-2007 I recently had the privilege of speaking with Richard Pechner about the Grateful Dead's Wall of Sound and his role in creating what is considered to be one of the largest sound systems of all time. Shazam talks APIs, advertising and expansion 'It's important we move beyond music' says CEO Andrew Fisher. It's been a crazy couple of years for Shazam. The company may be one of the veterans of the mobile entertainment industry, but in recent times it's felt like a startup rocketing to prominence on the back of a successful app. More than 50 million people have downloaded Shazam's mobile apps – with CEO Andrew Fisher keen to stress that the big number is about more than just iPhone.

5 technologies that will disrupt the world in 2013 Five emerging technologies could become mainstream next year. A list announcing the constituents was released by The Consumer Electronics Association (CEA), a heavyweight trade body in the US consumer electronics market, recently. Mind you, these are not products but new technology trends that we are talking about. 5 Ways to Promote Your DJ Mix on SoundCloud SoundCloud has been a game changer, not least for the number of CDs that haven\’t been burned & binned since it came along. Just last week our making a mixtape series got loads of feedback proving how popular mixtapes are with DJs wanting to promote themselves. Of course, they’re not mixtapes or even CDs a lot of the time nowadays, and it was obvious from your comments that your favourite place for posting digital mixes is SoundCloud. But after spending so much time getting your mix just-so, the last thing you want is to post it online for it to sit there, unlistened to and unloved, for eternity.

Acoustic fingerprint An acoustic fingerprint is a condensed digital summary, deterministically generated from an audio signal, that can be used to identify an audio sample or quickly locate similar items in an audio database.[1] Attributes[edit] Most audio compression techniques (AAC, MP3, WMA, Vorbis) will make radical changes to the binary encoding of an audio file, without radically affecting the way it is perceived by the human ear. A robust acoustic fingerprint will allow a recording to be identified after it has gone through such compression, even if the audio quality has been reduced significantly. For use in radio broadcast monitoring, acoustic fingerprints should also be insensitive to analog transmission artifacts. On the other hand, a good acoustic fingerprint algorithm must be able to identify a particular master recording among all the productions of an artist or group.

Using Audacity/Moving tracks From WikiEducator When creating a podcast that has uses multiple audio clips you will often be trying to get one clip to start after another one has finished. All separate tracks in Audacity sit on a timeline and can be shifted left or right along this timeline. Use the Timeshift tool to move tracks along the timeline. After selecting the Timeshift tool, select a track by clicking on the waveform and dragging it left or right to move it earlier or later in the timeline. Make your own Shazam? There's an API for that Yesterday, mobile discovery firm Shazam raised $32 million and talked about its ongoing move beyond basic music identification. A good thing, too, for today US company The Echo Nest is launching a platform that lets any developer create their own baby Shazam for a fraction of the cost. It's called Echoprint, and is being touted as the world's "first fully open-source music fingerprint service", drawing on UK firm 7digital's catalogue of 13 million songs, and with plans to expand its database over time as more apps are launched using it. "Music fingerprinting should belong to the Internet," says Echo Nest co-founder and chief technology officer Brian Whitman, in a statement.