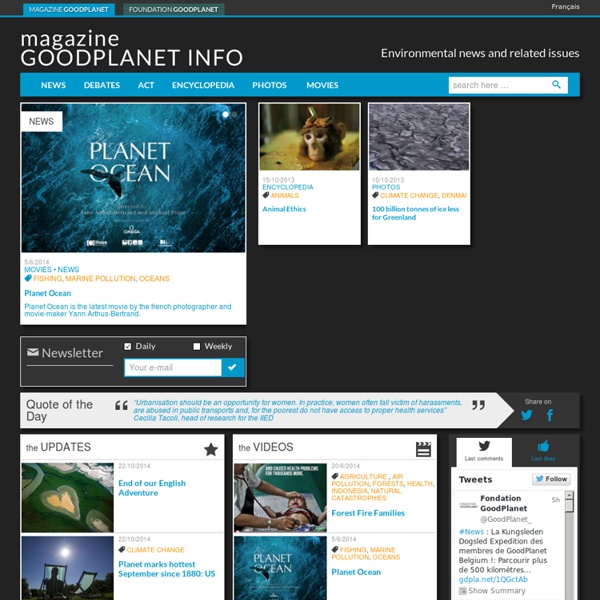 More than 44,000 people came together to set the Guinness World Record for reforestation. A group in Ecuador set a world record over the weekend by planting nearly 650,000 trees in a single day. Agence France-Presse reports that on May 16, 2015, nearly 45,000 people took part in the largest single-day reforestation project ever. In total, 647,250 trees (and more than 220 species of plants) were planted on roughly 5,000 acres of land, marking a new Guinness World Record. Woo! Volunteers begin reforesting an area near Catequilla, Ecuador. Poachers kill over 10000 elephants in Gabon A new study confirms what has been long suspected: elephant populations are being decimated to the point that the survival of the species in Central Africa is now in question. According to a study by the Gabonese National Parks Agency, WWF and the Wildlife Conservation Society (WCS), poachers have killed an estimated 11,100 elephants – between 44 to 77 per cent of the population –in parts of Minkébé’s National Park and its surroundings in northern Gabon since 2004, when it held Africa’s largest forest elephant population. “The situation is out of control.

Hawaiians fight back against GMO experiments The state of Hawaii has become a lot like the island of Dr. Moreau. Except that instead of Dr. Moreau — the mad scientist in H.G. Wells’s 1896 novel who vivisected animals into beast-people — Hawaii is ruled by the GMO industry. Monsanto, Dow AgroSciences, Syngenta, DuPont Pioneer, and BASF use the Pacific archipelago as open-air testing grounds for their experimental genetically modified crops, and they spray those crops with herbicides and other chemicals to test how they respond. Democrats Share the Blame for Tragedy of Iraq War U.S. Army Soldiers training at Camp Buerhing, Kuwait, Feb. 14, 2010, in preparation for a security mission prior to deploying to Iraq. (Photo: The National Guard)The Democrats who voted to support the war and rationalized that vote by making false claims about Iraq's WMD programs - a minority of Democrats, but much over-represented in Democratic leadership councils - were responsible for allowing the Bush administration to get away with lying about Iraq's alleged threat. Here on the tenth anniversary of the Iraq War, it is important to remember that it was not just those in the Bush White House who were responsible for the tragedy, but leading members of Congress as well, some of whom are now in senior positions in the Obama administration.

Setting a country alight: Indonesia's devastating forest fires are manmade We are witnessing the worst manmade environmental disaster since the BP gulf oil spill. Huge, out-of-control fires rage through the forests of Indonesia – and the source of many is the practice of deliberately burning the land to clear it for palm oil and paper products. Thousands of fires have been lit to clear land simply because it is 75% cheaper than other methods. By burning down forests companies can get access to the land and can commence industrial pulp and palm oil plantations.

Ivory Worship - Interactive: Elephant Ivory Poaching Killing African elephants for their ivory is devastating a species that’s already losing ground to a growing human population. In 2011 poaching hit the highest level in a decade, with the greatest impact in the central Africa region. Most of the world’s countries agreed to ban international trade in ivory in 1989. Yet demand has grown in Asia, driven by new wealth in China. Ivory seizures represent only a fraction of what gets through. Each tusk icon represents 90 elephants, based on a tusk weight of 11 pounds, used to help calculate poaching levels.

Great tits: murderous rapacious flesh-rending predators! – Tetrapod Zoology If you’re a long-time reader of Tet Zoo you’ll be familiar with the remarkable fact that Greater noctules predate on nocturnally migrating passerine birds (this was discussed in a ver 1 article that I’ll update and recycle for ver 2 at some stage). Various predatory microbats around the world predate on small birds, but it was a bit of a surprise to learn that this behaviour occurred in western Europe. Of course, bats don’t have it all their own way: it’s well known that bats are heavily predated upon by raptors and owls. As revealed today by Péter Estók and colleagues in , however, it now seems that hibernating pipistrelle bats have another predator to worry about: the Great tit . Say what?

We did it! Europe takes historic stand against corruption We did it. After months of our hard campaigning, last night European leaders reached a deal that requires oil, gas, mining, and logging companies to publish the payments they make to governments. Previously, these payments were made in secret, fuelling corruption; but this victory will help promote accountability. Iraq: War's Legacy of Cancer Bombsites like this one in Fallujah remain toxic and likely continue to cause illnesses. (Photo: Dahr Jamail / Al Jazeera) Contamination from Depleted Uranium (DU) munitions and other military-related pollution is suspected of causing a sharp rises in congenital birth defects, cancer cases, and other illnesses throughout much of Iraq. Many prominent doctors and scientists contend that DU contamination is also connected to the recent emergence of diseases that were not previously seen in Iraq, such as new illnesses in the kidney, lungs, and liver, as well as total immune system collapse. DU contamination may also be connected to the steep rise in leukaemia, renal, and anaemia cases, especially among children, being reported throughout many Iraqi governorates.

The Eco-Apocalypse in Indonesia That No One is Talking About Alex Pietrowski, StaffWaking Times Some of the most devastating fires the world has ever seen are happening right now in Indonesia, and this unfolding disaster is getting little attention. Annual fires during the dry season have become typical in the last 20 years or so as slash and burn rainforest farming techniques have ravaged this once pristine part of the world, but now this year they are catastrophic.