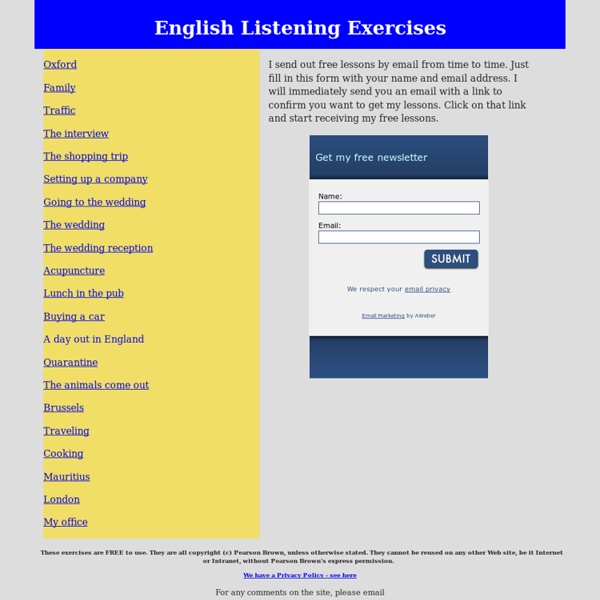 Listening Listening Lessons Dogs, Dogs, Dogs - Idioms and phrases using the word 'Dog'. Get the phone! - A listening exercise. Listen to the phone conversation and then answer the questions. Listening Exercise: The Birthday Party - A listening exercise. More than 20 free listening tests for IELTS This is my selection of the best free practice listening sites for IELTS on the internet. Not all of these tests are exactly formatted to the IELTS exam but they are excellent for practising your listening skills. Before you go there may I suggest you check out these pages and resources:

Standardized Tests 14 September, 2014 Photo Credit: Alberto G., via Flickr Voice 1 Welcome to Spotlight. I’m Ryan Geertsma. Voice 2 Nursery rhymes & songs for baby Our popular Baby Karaoke is available as a free smartphone app! With the mobile version of Baby Karaoke, you can sing with your child in the car, on holidays, waiting at the dentist, or under the blanket on a rainy day. Download your FREE Baby Karaoke app now!

I'll tell you a story - Audio Written by Anonymous "The Story of the Three Bears" (sometimes known as "The Three Bears", "Goldilocks and the Three Bears" or, simply, "Goldilocks") is a fairy talefirst recorded in narrative form by British author and poet Robert Southey, and first published anonymously in a volume of his writings in 1837. The same year, British writer George Nicol published a version in rhyme based upon Southey's prose tale, with Southey approving the attempt to bring the story more exposure. Both versions tell of three bears and an old woman who trespasses upon their property. "The Story of the Three Bears" was in circulation before the publication of Southey's 1837 version.

Stories Summary Watch and listen as the CBeebies presenters tell a story. Often retelling traditional stories and fairytales, the presenters read aloud from a picture book. Children can sit back and listen as well as follow the pictures on screen. Enjoying being read to, talking about books, reading stories and becoming familiar with them creates enthusiasm and interest that is likely to stay with children. For ESL English Language Learners What is most notable about this funny, touching, memorable novel is the resounding accuracy with which the author captures the voice of a boy on the brink of adulthood. Charlie is a freshman. And while's he's not the biggest geek in the school, he is by no means popular. He's a wallflower--shy and introspective, and intelligent.

Quizzes Based On VOA Programs There are 102 multiple-choice quizzes. Other VOA Sections: America - History - Mosaic - People - Places - Quizzes - Studying - Words - RSS - More Quiz yourself on English grammar and vocabulary while reading scripts from VOA Special English.Not only can you practice English, but you can learn many interesting things while doing so. Games with Words

For ESL English Language Learners Christopher Boone knows all the countries of the world and their capitals and every prime number up to 7,057. He relates well to animals but has little understanding of human emotions. Although gifted with a superbly logical brain, at fifteen, Christopher's carefully constructed world falls apart when he finds his neighbor's dog, Wellington, impaled on a garden fork, and he is initially blamed for the killing. Christopher decides that he will track down the real killer and turns to his favorite fictional character, Sherlock Holmes, for inspiration.