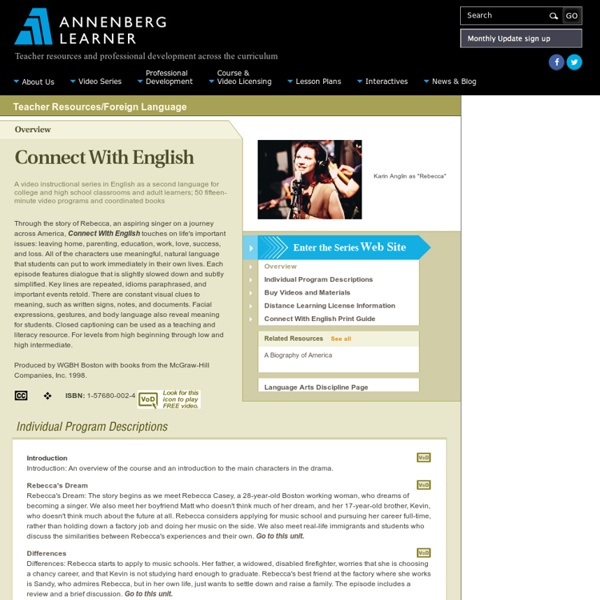 Introduction Introduction: An overview of the course and an introduction to the main characters in the drama. Rebecca's Dream Rebecca's Dream: The story begins as we meet Rebecca Casey, a 28-year-old Boston working woman, who dreams of becoming a singer. We also meet her boyfriend Matt who doesn't think much of her dream, and her 17-year-old brother, Kevin, who doesn't think much about the future at all. Differences Differences: Rebecca starts to apply to music schools. A Visit To The Doctor A Visit To The Doctor: Rebecca's father has a worrisome checkup from his doctor. Celebrations Celebrations: Kevin graduates from high school, and Rebecca, after several rejections, is accepted into the San Francisco College of Music. Breaking The News Breaking The News: Rebecca's father tells Rebecca that he is against the San Francisco plan, but Kevin supports her. Leaving Home Leaving Home: Rebecca's father surprises her with the car and gives her a necklace that belonged to her mother.

Learn Songs (For ESL/EFL Students) Newest "Learn a Song" Podcast Twinkle, Twinkle Little Star - March 23, 2012 Focusing on "linking" pronunciation and the "soft-T." Learn Songs Using the Teleprompter Player Learn Songs Using My Vidoes on YouTube Learn Songs Using the Flash Player Most of these are excerpts from recordings that I did a many years ago. Complete Podcasts Converted to Flash If you don't see the play button when you go to one of these pages, please reload the page and you should be able to see the play button. First, listen and repeat to learn the words and the melody. Previous Podcasts Split and Converted to Flash The "listen and repeat" part and the "sing the whole song" part have been split into two files. More About "Learn a Song" & History

Top 100 Youtube videos for EFL! Youtube recently celebrated its 5th anniversary. Wow! See the video karaoke I made with Breakingnewsenglish content. However, today, in honor of youtube and what it does for our classrooms – I’ll leave you with a great gift. Many others I wanted to include but alas they weren’t on youtube – but find them where I’ve collected them against father time – on EFL Classroom 2.0. Also, get the ebook which includes loads of link lists plus the best commercials for teaching English. If you liked this post – you might also like The Best Commercials for the EFL Classroom.

Audio for ESL/EFL: Listen and Read Along (Flash/MP3) YouTube Videos Science and Technology This is 4 minutes long and use the Teleprompter Player.'Caine’s Arcade' Video Brings Fame to Creative Boy Words & Their Stories These are 5 minutes long and use the Teleprompter Player. American Stories The Tell-Tale Heart - Written by Edgar Allan Poe (Teleprompter) A Pair of Silk Stockings - Written by Kate Chopin (On YouTube.com)This is a playlist with 2 videos. (13:15) The Diamond Lens - Written by Fitz-James O'Brien (On YouTube.com)This is a playlist with 6 videos. (24 minutes) The Law of Life - Written by Jack London. President Obama Barack Obama's Weekly AddressesFor advanced students, we have a set of these. About "Listen and Read Along" These are all things that I adapted from material produced by the Voice of America (VOA). Some of these are in Flash, some are MP3 files played by a Flash player and some are hosted on YouTube.com.